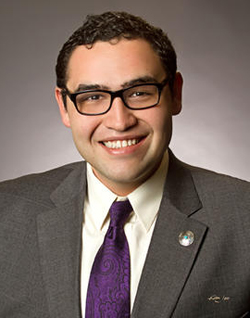 The New Mexico Family Act would provide up to 12 weeks of unpaid leave.

“Currently, the federal Family and Medical Leave Act fails to cover 40 percent of U.S. workers. Even among those covered, few can afford to take unpaid leave,” Candelaria said. “The current law asks too many New Mexicans to make an impossible decision: take unpaid sick leave and risk losing their jobs, or ignore their families’ health to keep getting their paycheck. My bill makes sure New Mexicans can be there for their families without the risk of losing the job they need.”

Passage of this bill would make New Mexico only the fourth state in the nation to guarantee paid family and medical leave. The bill creates a fund that can be used by workers taking medical leave to care for themselves, their families or bond with a new child. Both employers and employees will pay into the fund, two-tenths percent on net income. Employees will receive approximately 60 percent of their average salary.

Candelaria was joined by Roxanne Rosa, an administrator at Our Montessori School in Albuquerque. Rosa spoke as an employer supporting the New Mexico Family Act.

“When I read this bill, it made sense for our industry,” Rosa said. “It’s hard for families to take time off to take care of their children, so they send them to school sick. That puts everyone at risk.”

“We can’t afford to offer our employees paid sick leave, even though we wish we could,” Rosa continued. “With this legislation, we would still know our employees were being taken care of. It is critical this bill be passed.”

Kris Buchman, a single mom from Albuquerque, spoke about her experience with unpaid sick leave.

“If I’m not at my job working, there is no pay. I’m allowed to take time off when my son is sick, but it means missing out of $150-$300 a day,” she said. “Sometimes when my son has a cold, I just give him children’s cold medicine, send him to school and pray he stays away from the other kids.”

Candelaria said paid sick leave should be a reality across the country, and New Mexico should play a leading role. He noted that 60 percent of Americans support paid legislation, and that the United States is one of three countries that does not provide paid leave. Studies from other states have shown that paid leave does not increase consumer prices, nor has a negative impact on production or business.

“The facts are in, paid family leave is good for New Mexico, and good for the economy,” Candelaria said. “This is a bill that will help all workers. These are the sort of solutions we should be talking about to move the state forward. It will be a fight, but every good thing that has happened for hard-working people takes hard work.”