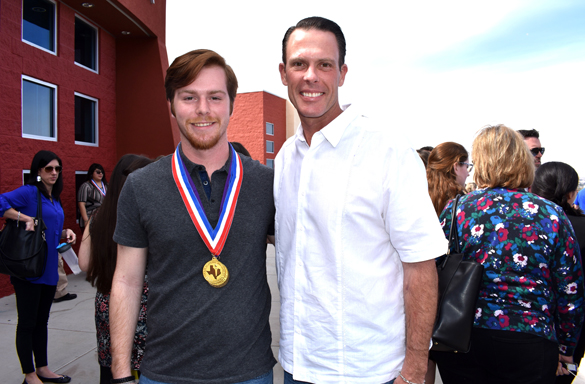 Academic Decathlon winner Cameron Chrobocinski with his father Los Alamos County Councilor James Chrobocinski. Courtesy photo
Staff Report:
Los Alamos County Councilor James Chrobocinski’s son Cameron Chrobocinski, 18, is a senior at King High School in Corpus Christi, Texas. He has been competing in an Academic Decathalon and he and his team made it all the way to Texas State Competition this past weekend in El Paso.
Cameron won 1st place in the speech category with a perfect score of 1,000 points in the second most populous state in the nation. His speech was about his great-grandfather, James Joseph Bramble, 97, of Los Alamos, and his involvement with the Manhattan Project and how he has inspired him to do great things with his life.
The winning speech:
By Cameron Chrobocinski
Academic Decathlon Speech
Texas State Competition

My great-grandfather, James Joseph Bramble, told me the last time I went to visit him, “Cameron, life is what you make of it. So make it great.” He made of life a long and impressive legacy of scientific contribution and patriotism, something I intend to do for myself as well.

When my great-grandfather was a young man, living in Wisconsin, serving in the Army in the 1930’s, he noticed a paper posted on the bulletin board in his compound. It advertised that the Army was willing to pay for G.I.’s to go back to school to get a degree in science or engineering. He signed up for the program, took a test, and was soon enrolled at Ohio State University.

After three terms he was transferred to Oak Ridge, Tenn., the place that would later become the site at which most of the U.S. uranium enrichment during WWII would take place. After less than a week, he was transferred yet again. This time he was not told anything about the destination. When he and some other men boarded the train leaving Oak Ridge, it was revealed they were heading for New Mexico. It wasn’t until they had reached the top-secret military town of Los Alamos that they were told they had been assigned to the “Manhattan Project.”

The Manhattan Project was officially active from 1942 through 1946 though research and testing continued for even decades after the war. It was a top-secret WWII government project tasked with researching and weaponizing atomic power. This program was created on the recommendation of prominent European quantum physicists Albert Einstein and Leo Szilard, both of whom found Germany’s own research into atomic weaponry troubling.

My great-grandpa Bramble was originally assigned to a team tasked with setting off high explosives in particular situations and configurations and recording the resulting explosions with special cameras. This would help to design the Nagasaki bomb, codenamed “Fat Man.” From this job, my great-grandpa  Bramble was transferred to “counter-intelligence,” meaning simply that whenever any amount of Los Alamos’ uranium was outside of its safe, a team of G.I.’s were to stand with their guns drawn in case someone were to try to steal it.

Unfortunately, after that exposure, he was told he could no longer risk being in even minute amounts of criticality or else he would die. As per this decision he was transferred yet again, this time to lab equipment and bomb design. He worked specifically with the B61 thermonuclear bomb until he retired in 1980. It was through the unfortunate necessity of the use of the atom bomb that the US was able to conclude the war in the Asian-Pacific theatre with considerably fewer casualties than if the final scene of the war had been that of pure attrition. This, my great-grandfather told me, is a great source of pride for him – the lives he was able to save through the implementation of the fruits of his research.

Though the atom bomb’s inherent nature, akin to that of a double-edged sword with the bitter aftertaste that came with the sweetness of victory for the US, it did far greater good than harm – saving hundreds of thousands, if not millions of lives on both sides of the war. If there’s ever anything for me to be personally proud of, it’s my lineage’s closely woven ties to the conclusion of the Second World War and the scientific advancements that came with it. When my great-grandfather says to me, “Cameron, life is what you make of it, so make it great,” I take his words to heart.

I am interested in the field of Artificial Intelligence, a new and rapidly expanding field that has the potential to do great good or great harm, similar to atomic power in the early 20th century. I just hope that I too have the potential to become part of something greater than myself and steer this fledgling technology in the right direction just like my great-grandfather did when he was a young man. 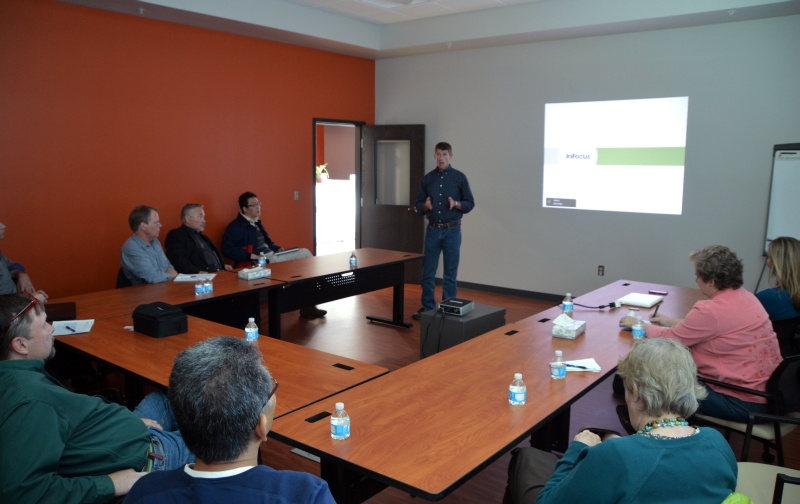