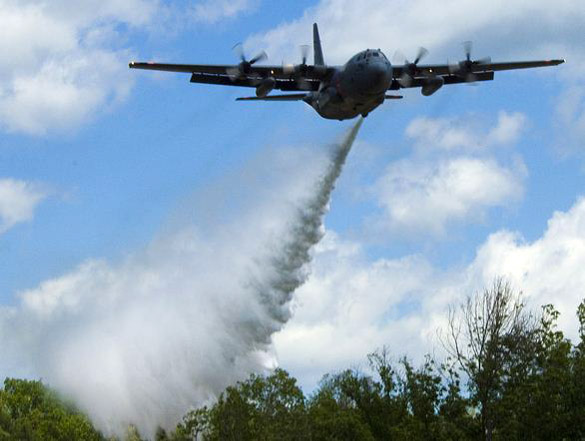 A C-130 transport aircraft similar to this one is scheduled to drop a large quantity of water over Pajarito Mountain between about 11 a.m. and 3 p.m. today for the film ‘Granite Mountain’. Courtesy photo

The C-130 transport aircraft scheduled to drop a large quantity of water over Pajarito Mountain between about 11 a.m. and 3  p.m. today for the film “Granite Mountain,” will be basing out of the Santa Fe Municipal Airport.

A helicopter carrying crew to film the C-130 in action also will be basing out of Santa Fe Airport. Neither aircraft will land at Los Alamos County Airport.

No fire will be set as part of this scene. In fact, most of the wildfire scenes for the film are being edited in as computer generated images. However, No Exit Film, LLC, the production company for “Granite Mountain,” is working directly with the Wildland Fire Division of the Los Alamos Fire Department to ensure safe operations during filming on the mountain.

Hikers and bicyclists are strongly advised to avoid the Pajarito Mountain top and immediate area during this four-hour period due to safety concerns related to the water drop.

Camp May Road will be open, as will the Pajarito Mountain Lodge and Café. Film vehicles and equipment will be staged in the lower parking lot of Pajarito Mountain Resort. No other County or public areas will be closed today.

Remaining film dates according to the current schedule are Wednesday, Aug. 17 in White Rock and the following week on Wednesday, Aug. 24, Thursday, Aug. 25 and Friday, Aug. 26. All schedules are subject to change and the Los Alamos Film Office will make every effort to notify the general public through the local media and County website, Facebook page and the County Line e-newsletter. For all filming activity, the County and/or film production representatives are in regular contact with stakeholders who are directly impacted.

“Granite Mountain,” starring Josh Brolin, Jeff Bridges, Jennifer Connelly, Miles Teller and Andie MacDowell, is the story of the real-life Granite Mountain Hotshots, an elite group of wildland firefighters that courageously battled one of the worst wildfires in history to save an Arizona town.

NOTE: The Lockheed C-130 Hercules is a four-engine turboprop military transport aircraft designed and built originally by Lockheed, now Lockheed Martin. Capable of using unprepared runways for takeoffs and landings, the C-130 was originally designed as a troop, medevac and cargo transport aircraft. The versatile airframe has found uses in a variety of other roles, including search and rescue, scientific research support, weather reconnaissance, aerial refuelingand aerial firefighting.