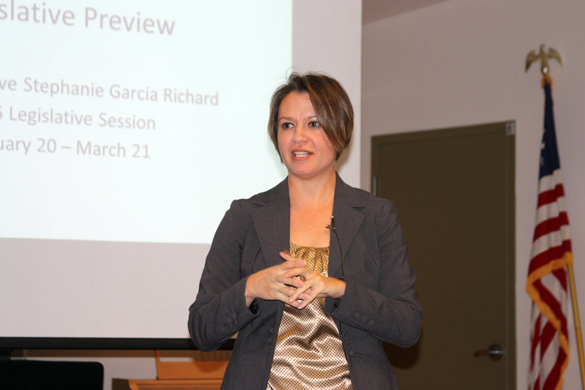 Garcia Richard concentrated on legislation affecting business owners and touched on other legislation as well. She said she works closely with the Los Alamos Chamber, as well as other entities, including Los Alamos County government.

“I want to build an even stronger relationship with the business community,” she said.

The deadline for introducing new legislation is Feb. 19 and Garcia Richard urged citizens to approach her about legislation they would like to see her put forward. She touted the recent passage by the U.S. Senate of legislation to establish the Manhattan Project Historical Park, which will be located in Los Alamos, Oak Ridge, Tenn., and Hanford, Wash.

Although establishment will take three to five years, the Park should have a positive impact on tourism in Los Alamos, Garcia Richard said.

Garcia Richard said the executive and legislative branches of government both want to build a business friendly climate in New Mexico, which is a hopeful sign for the upcoming session.

The state is working to establish a One Stop Portal, through which business owners could work with various agencies through a “one-stop shop” to negotiate the state regulatory system, Garcia Richard said.

Garcia Richard serves on the New Mexico Jobs Council, a group which includes labor, government, business people and economic developers. The group has conducted an in-depth economic study and its proposals had to be passed unanimously before being released. Some of those proposals included the following funding increases to state initiatives:

The State’s goal should be to encourage outside businesses that “bring in new dollars – not just recycle what we already have,” Garcia Richard said.

“Workforce development is one of the most important things we can do to create a healthy business climate,” Garcia Richard said. “We need significant investment in jobs and the economy.”

Garcia Richard pointed to the State’s Forest Restoration Program as one such initiative. Solo businesses run from home or small offices will benefit greatly from broad-band initiatives as well, she said.

Other proposed legislation of interest to business owners that Garcia Richard is following closely include legislation concerning liquor license changes and other changes to liquor legislation that may affect breweries, wineries and distilleries as well as restaurants; and adding all nicotine products to the Tobacco Tax Act and prohibiting sale of e-cigarettes to minors.

Other items on Garcia Richard’s proposed legislation agenda include:

Garcia Richard noted that Dave Fox of CB FOX has begun organizing a group to investigate the possibilities of improving the road through the Jemez to Cuba that connects Los Alamos to the Four Corners region.

“If even 5 percent of the million visitors to the Four Corners come through Los Alamos, the impact would be huge,” Fox said. Reducing travel time from 2.5 hours to one or 1.5 hours would bring significant traffic to the town, he said.

“It needs to be a regional effort,” Garcia Richard said in reply. “Legislators need to hear from business owners.”

Although the revenue forecast is “not looking good” for this year, Garcia Richard said Gov. Susana Martinez “has given her stamp of approval” to four of the top pieces of legislation proposed by the Jobs Council, which is a good sign for businesses in New Mexico.

Garcia Richard urged constituents to visit http://www.nmlegis.gov/lcs/ to keep up with what’s happening at the N.M. Legislature and to contact her at stephanie.garciarichard@nmlegis.gov, PO Box 4657, Los Alamos NM 87544 or 505.500.4343 with their questions and concerns.