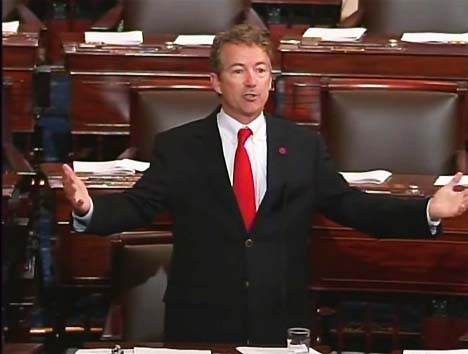 Sen. Rand Paul on the floor of the U.S. Senate May 31, 2015 speaking out against the Patriot Act. ScreenShot/LADP

The failure of the Senate to do extend or modify the NSA’s surveillance power was the result of the unyielding position of Sen. Rand Paul, R-Kentucky, who upset many fellow Republicans – some of whom even charged that his position makes him unsuitable to be the commander in chief (Rand is a declared candidate for the Republican nomination for president).

The New York Times notes that the failure of the Senate also is the result of a miscalculation by Sen. Mitch McConnell, R-Kentucky, the majority leader, who believed that the prospect of the expiration of Section 215 would lead opponent of the surveillance programs (like Senators Paul and Ron Wyden, D-Ore., supporters of the current program (most Republican senators, led by John McCain, Arizona, John Cornyn, Texas, and Lindsey Graham, South Carolina, joined by Sen. Angus King, I-Maine, and supporters of the House’s USA Freedom Act (most Democrats]) to agree to a few weeks extension of Section 215 to allow for more negotiations among senators and between senators and House member.

McConnell and other supporters of the current NSA data collection program admitted that even though they consider these programs essential to U.S. national security and an important weapon in the war against terrorism, there would now be no escape from substantial reforms which would restrict such data collection and storage.

On the other side, even the most ardent critics of the NSA surveillance programs admitted that though emboldened by the Edward Snowden revelations, their cause – limiting the ability of the NSA to collect mass amounts of data in order better to connect the dots once a suspicion against an individual is developed – has advanced further and faster than they had believed.

Very few support Paul’s purist libertarian approach, but although many more in the Senate support the hawkish approach to surveillance collection, they now admit that there are just not enough of them.

This means that the compromise House bill – the USA Freedom Act – which limits the ability of the NSA to collect data and store it, is now likely to pass the Senate mid-week.

It remains to be seen, however, how many, and what type, of amendments McConnell would allow to be brought to the floor, and, if some of these amendments are approved, whether House members would agree to any modifications to the USA Freedom Act.

The Patriot Act was passed in 2001, but as the Guardian reports, the USA Freedom Act, if passed, will be the first rollback of NSA surveillance since the seminal 1978 Foreign Intelligence Surveillance Act (FISA).

Since Section 215 is now dead, and since the USA Freedom Act has not yet been passed into law, the FBI is not authorized to use powers granted under the Patriot Act, including the pursuit of so-called “business records” relating to Internet use, hotel and rental car records, and credit card statements.

“This is the only realistic way forward,” McConnell acknowledged on Sunday, just hours before the Patriot Act was set to expire. The Senate then voted 77 to 17 to open a debate on Tuesday on the USA Freedom Act. The same procedural move failed by three votes on Saturday ten days ago, because Senate Republicans were unwilling to accept the modification to surveillance entailed by the USA Freedom Act.

The White House and the U.S. intelligence community support the USA Freedom Act – the latter somewhat grudgingly, it should be noted – and the White House was quick to welcome the Senate vote.

“The Senate took an important — if late — step forward tonight,” White House press secretary Josh Earnest said in a statement. “We call on the Senate to ensure this irresponsible lapse in authorities is as short-lived as possible.”

The Washington Post reports that after the procedural vote in the Senate, Paul conceded that the House bill, to which he objects, will now pass, although he appeared willing to drag it out as a long as possible. “Tonight begins the process of ending bulk collection,” he said.

McConnell tried to move for a temporary extension of the less controversial components of the Patriot Act, components such as “lone-wolf” and “roving wiretap” capabilities which have nothing to do with bulk metadata collection and which even critics of the more expansive Section 215 admit are useful law enforcement and intelligent tools.

Paul, however, opposed even the temporary extension of these powers, and he threatened to block any attempt to extend them by using his right as a Senator to seek unanimous consent.

Paul’s tactics led to angry criticism from establishment Republicans, including a heated exchange with John McCain, who accused Paul of endangering national security to boost his presidential campaign. McCain said Sunday that Paul “obviously has a higher priority on his fundraising and political ambitions than securing the nation.”

Paul responded angrily, charging that his Republican opponents were rooting for a terrorist attack to embarrass him.

“Some of them I think secretly want an attack on the United States so they can blame it on me,” he said.

When Congress passed Section 215v in 2001, it imposed a “sunset” rule which would require the reauthorization of the act every five years. In 2006, however, when bulk collection powers for the NSA were added to Section 215, it became shrouded in such extensive secrecy that reauthorization became routine.

Between 2011 and Sunday, Edward Snowden made his revelations.

“No doubt it played a role,” Sen. Dean Heller, R-Nevada, told the Guardian. “I think it played the same role for me as it did for most of the American people, who were surprised and stunned that the government had this sort of access to this kind of data.”