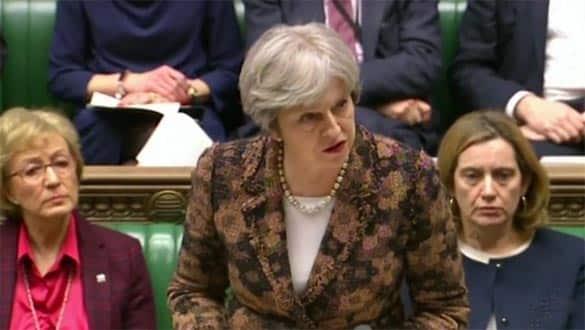 British Prime Minister Theresa May says evidence shows that it is “highly likely” that Russia is behind the nerve-agent attack on a former Russian spy and his daughter in the city of Salisbury despite Kremlin denials that Moscow was involved in the incident.

May said in a speech to parliament March 12 that either the Russian state was responsible for poisoning 66-year-old Sergei Skripal and his 33-year-old daughter Yulia in the city of Salisbury, or that it allowed the military grade nerve agent Novichok, developed in the Soviet Union near the end of the Cold War, to get into the hands of others to carry out the attack.

“Should there be no credible response, we will conclude that this action amounts to an unlawful use of force by the Russian state against the United Kingdom,” May said, calling the attack a “reckless and despicable act.”

“We will not tolerate such a brazen attempt to murder innocent civilians on our soil,” she added.

“The use of a highly lethal nerve agent against U.K. citizens on U.K. soil is an outrage,” Sanders said during a daily White House briefing. “The attack was reckless, indiscriminate and irresponsible. We offer the fullest condemnation.”

Officials say the pair remain in a “critical but stable condition” at a Salisbury hospital after being exposed on 4 March to a nerve agent.

Russia’s Foreign Ministry was quick to denounce May’s speech, saying in a statement that the accusations were politically motivated and based on a provocation.

“It is a circus show in the British parliament,” the TASS news agency quoted Foreign Ministry spokeswoman Maria Zakharova as  saying.

Even before May’s comments, the Kremlin had strongly denied any notion of involvement, asserting that anti-Russian hysteria is being whipped up by the British media.

President Vladimir Putin, speaking just hours before the British meeting, said officials in the United Kingdom should first figure out what exactly occurred in Salisbury before blaming Russia for the incident.

“Get to the bottom of things over there first, and after that, then we can discuss it,” he told a BBC journalist in response to a question about Skripal during a tour of a greenhouse at the National Grain Center in the Krasnodar region.

Earlier in the day, Putin’s spokesman Dmitry Peskov told reporters that, since Skripal worked for British intelligence and was poisoned on British soil, the incident had “nothing to do with Russia, let alone the Russian leadership.”

“The odds that #Russia’s govt lost control of #Novichok stocks and this was used by some murderous mavericks to go after #Skripal are minimal,” Russia analyst Mark Galeotti said on Twitter.

Skripal, a retired Russian military intelligence colonel, was convicted by a Moscow military court in 2006 of “high treason” for passing secrets to Britain’s Secret Intelligence Service. He was one of four Russian prisoners released in 2010 in exchange for 10 Russian sleeper agents detained in the United States.

England’s chief medical officer said during the weekend that traces of the nerve agent used to poison Skripal and his daughter had been found in a pub and a restaurant the two visited before falling ill.

Sally Davies, the chief medical officer, on March 11 urged an estimated 500 people who may have come into some contact with the substance to wash their clothes as a precaution and clean items such as mobile phones, handbags, and eyeglasses.

“There has been some trace contamination by the nerve agent,” Davies said. “I am confident this has not harmed the health of anyone who was in The Mill pub or Zizzi’s [restaurant].”

Trace amounts of the substance were found on and around a table where the pair had eaten in the restaurant, the BBC reported.

Foreign Secretary Boris Johnson has said that Britain might step up sanctions against Russia if it finds that Moscow was involved.

Home Secretary Amber Rudd said on 10 March that it was still “too early” to say who was behind the poisoning.

She has said police were examining more than 200 pieces of evidence, had identified more than 240 witnesses, and were looking through security camera footage.