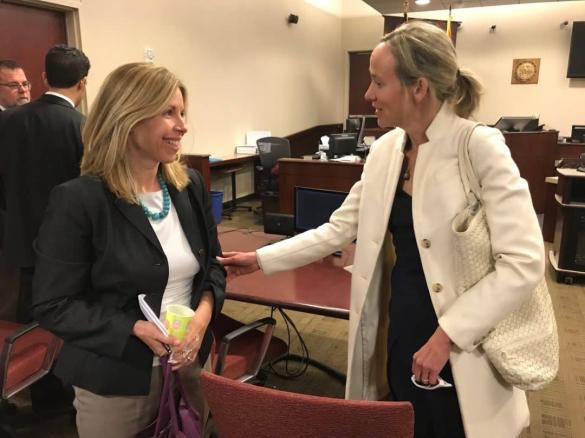 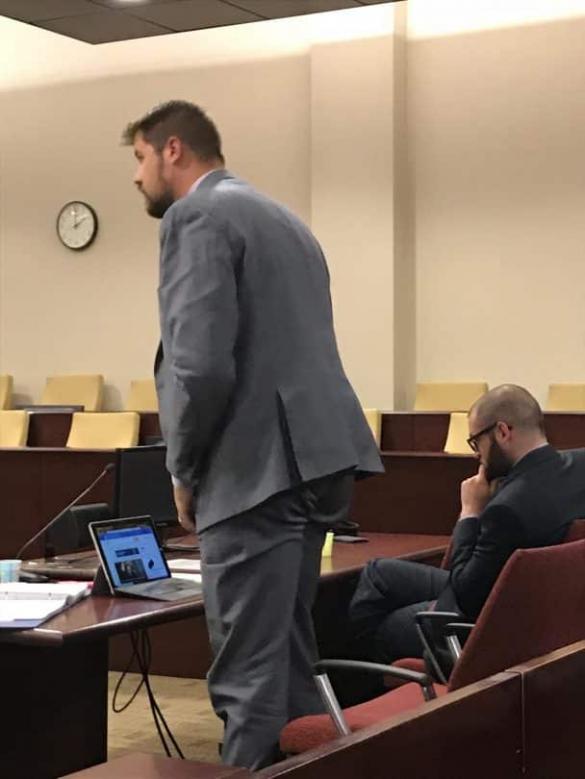 A lawsuit filed by former Los Alamos resident Patrick Brenner last June against Los Alamos County Councilors and the County’s Records Custodian under the state Inspection of Public Records Act was back in First Judicial District Court Wednesday but is not expected to be resolved anytime soon.

The case, which has dragged on since June, involves a request by Brenner under the state Inspection of Public Records Act (IPRA) for all emails sent and received May 15 by Los Alamos County Councilors. Brenner maintains not all O’Leary’s emails from her personal email account from that date have been produced. The County has requested that the Court review O’Leary’s personal emails in camera to determine if they are public record and should be released to Brenner.

Following a lengthy hearing with argument by Attorney Kate Ferlic representing O’Leary, Blair Dunn representing Brenner and Tony Ortiz on behalf of the County, Judge Greg Shaffer said he would issue an opinion on the emails at issue, on or before May 7, which is the start of the Court’s next trial docket.

“Due to the issues raised by these particular emails as well as the volume and capableness of the argument of counsel, the Court is going to take the matter under advisement,” Judge Shaffer said.

Early in the hearing, Judge Shaffer clarified that the issue to be addressed Wednesday was whether or not any of the emails in question are public records within the meaning of IPRA and whether an exemption would apply. He said there was an argument by the County about the reasonableness of its search for the request for records and who should be responsible in the event that non-exempt public records were produced.

“This issues are for another day and will not be addressed by the Court at today’s hearing, not should they be addressed by the parties in their arguments,” he said. He added that if he determines any of the emails are in fact non-exempt public records, a status conference will be set to see where to go from here on.

Judge Shaffer reiterated that in camera review is not the first step the courts like to take when resolving these disputes but that he would like to use a Vaughn Index in order to narrow down the issues that are between the parties to allow them an opportunity to make arguments based on the represented content of the records as well as conserve Court resources.

“I think the Vaughn Index has served its purpose in that regard and I will state for the record that generally speaking I found  it to accurately describe the contents of what were at issue,” he said. A Vaughn Index is an itemized index correlating documents or portions which have been withheld under a request for release of public records.

Ferlic told the Court that the context of Brenner’s case is that Brenner, as indicated in O’Leary’s affidavit, has had “a long history of focusing intently on Miss O’Leary”.

“I think you will see in the affidavit where Miss O’Leary describes, and I think this is just a good example of the behavior, a photograph that was posted on his blog of Miss O’Leary’s face with her teeth blocked out as if it was a threat to knock them out. I think that’s important as to any question of whether or not this was public business and I will get there. But the fact is that Miss O’Leary complied with the IPRA request. She provided all of Los Alamos County Council with all of her emails that related to public record and basically because of this there was an email released by the County Council where another councilor, James Chrobocinski, had sent an email to the Chief of Police in Los Alamos letting him know what was going on. Miss O’Leary’s personal email was cc’ed on that communication,” Ferlic said.

“Miss O’Leary maintains that just because she serves as a county councilor, she does not leave all of her personal rights, her privacy rights at the door. She said there are two different people to consider, Susan O’Leary the councilor and Susan O’Leary the private person and that there is a recognition of those people being separate,” Ferlic said.

“I think the plain language of IPRA supports Miss O’Leary’s position that the personal emails listed in the Vaughn Index do not meet the plain language of the statute. First, Miss O’Leary does not send, create or do any of this on behalf of the public body … It’s really a question of agency,” Ferlic said. “Was she acting in the scope of her employment, was she acting in the scope of her duties and her role as a county councilor? With that, the second thing, is that Susan O’Leary in her personal emails does not meet the requirement of a public body under IPRA because she was not acting in her capacity as a county councilor when she forwarded those emails to basically, intimate confidants, or other people that could be at risk for Mr. Brenner’s ire, attack, whatever was going to come of this. In terms of public business, I think that that is more certain here.”

Ferlic later told the Court that there is not a shred of correspondence that indicates that O’Leary is acting in the capacity of a councilor as defined by the duties that are bestowed on her as a public official and that none of them relate to public business under the definitions of all the case law reviewed in Court or cited in the briefing.

“It really is a public function test and it’s fact specific so when Miss O’Leary hands those emails to the Court for you to review, you do see that she’s not conducting any business on behalf of herself as a councilor, on behalf of the County Council” she said. “The argument that any public document whatever you do with it might be a public record, I think that that is far too broad and undermines the plain language of IPRA. That would be like a private person pulling information on the New Mexico Health Exchange off the website and giving it to another person. Is that related to IPRA?”

Dunn told the Court that if there is an item that is still a matter of public debate such as the recreation bond or correspondence that was unwelcome from a member of the public to the Council, those are ongoing types of disputes and that an easier way to bound that is to look at the content of the item in front of the public body. Judge Shaffer asked if it had any relevance if true that the Council had acted by putting the matter to the public and so their role was to await the result of the rec bond election and if that had any bearing on whether or not O’Leary’s emails were public records.

“I think it does, except that it’s still going to end up being a matter of public record,” he said.

Dunn raised the idea of personal capacity versus private capacity and the ability of a councilor to somehow step back and forth between the two.

“The greatest amount of information possible is what we’re supposed to be getting to, not some sort of limitation on that but the greatest possible information … so to sit there and say that a public official could somehow say, ‘I’m going to take my hat off, and I’m going to talk about public business, but the public’s not going to understand when I’m taking my hat on or off. I’m going to go ahead and create another public record discussing public business but that one doesn’t belong to the public body.’ That’s a very daunting proposition,” he said.

Ortiz, speaking on behalf of the County said that if the County had had a chance to review O’Leary’s emails from the beginning they might have been able to provide the Court with more of a concrete position on whether or not the emails should be turned over. He said the County wanted to have on record that there were extensive attempts to respond to the request for records and that they believe O’Leary in good faith responded to them. He said the workings of the parties together dictates that the County shouldn’t be subject to any findings, fines or attorney fees.

Dunn responded to Ortiz by stating that O’Leary was acting as an officer of the County and that unfortunately is “still on the hook” and that he didn’t think there was anything they could do to escape that.

“There’s still no way you can separate that out conceivably without running afoul of all the precedent that has been identified by the Court and that all the parties have identified in the briefing,” Dunn said. “No party has identified any sort of case that supports the idea that in this instance there was a way for Councilor O’Leary to take her public hat off in order to communicate privately about public business. That’s just not in the law, and I believe if the Legislature had intended that it would probably have shown up in one of the exemptions to IPRA.” 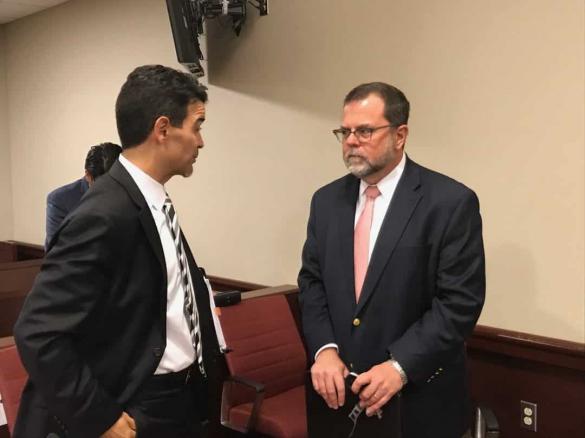 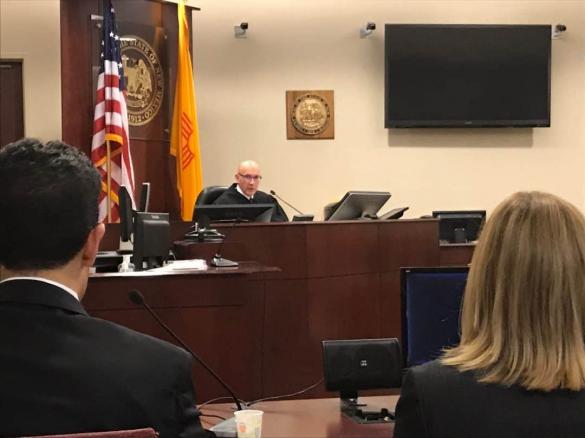 First Judicial District Judge Doug Shaffer announces his intention to take the issue of Susan O’Leary’s emails under advisement at the conclusion of Wednesday’s hearing in Santa Fe. Photo by Maire O’Neill/ladailypost.com