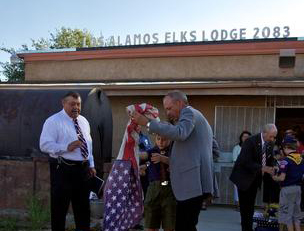 The New Mexico Environment Department is investigating the source of an intestinal sickness that struck 27 Los Alamos Firefighters Saturday night.

The firefighters fell ill after eating a roast pork dinner provided to them by the Los Alamos Elks Lodge #2083 at 1601 Trinity Dr.

“The Elks invited firefighters and police officers as a way to thank us for the work we did during the Las Conchas Fire,” Deputy Fire Chief Justin Grider said in an interview today with the Los Alamos Daily Post. “The Elks were a tremendous supporter of us during the fire and we hold no ill-will against the Elks for this situation.”

Grider explained that 29 firefighters attended the dinner including at least one who was off duty. Of those 29 firefighters, 27 experienced intestinal issues but none vomited, he said, adding that at no time was the community at risk for the fire department not being able to perform its duties.

All firefighters involved in the dinner were able to remain on duty for their full shift, he said.

Saturday’s dinner was open to all others who helped during the Las Conchas Fire as well as to all members of the local Elks Lodge. Someone outside of the fire department contacted the Environment Department to report the illness, Grider said.

“We are available to lend any support we can to the Elks in this investigation … the important thing is to get to the reason for the incident and ensure it doesn’t happen in the future,” he said.

Elks Exalted Ruler/President Lisa Harris said more than 100 meals were served at the Elks Lodge Saturday night and it’s unclear if anyone other than the firefighters became ill.

“We found out this morning from my son who is a firefighter that the firefighters had gotten sick last night,” Harris said. “We are so deeply shocked and so deeply apologetic to anyone who got ill and we are working closely with the health department and the environment department on the investigation to find the source of the illness.”

“Every item was prepared in our kitchen at the Elks Lodge,” Harris said. “The state environmental department cleared our kitchen today with a ‘good passed’ rating,” she said. “They are testing food samples to see if the cause of this illness originated from us. We are so very sorry to anyone who became sick. We’ve been holding these dinners for more than 20 years and this is the first time something like this has ever happened.”

The results of the food testing may determine whether the illness was caused from the dinner or from another source, Harris said.