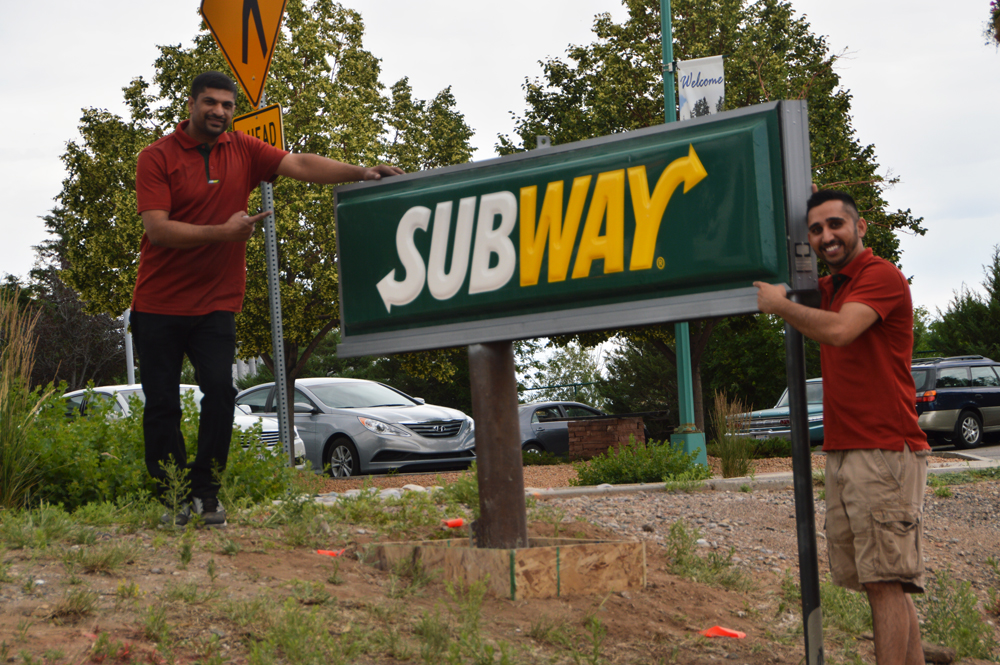 From left, marathon runners Michelle Hall, BethAnn Telford and Sarah Domnarski visit the Los Alamos Daily Post headquarters Friday to talk about the need to find a cure for pediatric brain cancer. The trio is running in today’s Jemez Mountain Trail Races. Photo by Carol A. Clark/ladailypost.com
By BONNIE J. GORDON
Los Alamos Daily Post
Like hundreds of other competitors in today’s 10th annual Jemez Mountain Trail Races, BethAnn Telford got up this morning, put on her running shoes and hit the trail with a couple close friends. But there’s something special about Telford. She’s running to find a cure for pediatric brain cancer. And she herself is a brain cancer victim.

Telford is running the 50K race with her good friends Sarah Domnarski, who traveled with her from Virginia, and Michelle Hall of Los Alamos. Hall met Telford when she joined a running group in Washington, D.C. Telford convinced Hall to run the Boston Marathon. “Beth inspires everyone around her,” Hall said.

Telford’s life changed forever 10 years ago when, refusing to leave her work at the U.S. Government Printing Office for a doctor visit, she learned over the phone that she had a brain tumor. Doctors had found a tumor the size of a baseball wrapped around a major blood vessel in the brain.

During a race a few weeks before, Telford heard a pop in her head and felt dizzy and weak. She finished the race, but only barely. In the days that followed, she began to run into furniture in her house and then to experience “mini seizures,” she said.

A few weeks later she underwent her first surgery at John Hopkins Hospital. Recovery meant learning to walk again. Telford faced significant physical challenges, including the loss of vision in her left eye. Through sheer determination, she was ready to compete in the Marine Corps Marathon six months later.

“The first year was very tough,” Telford said. “That year, I was mad and asking—why did this have to happen to me?” Telford got past her anger by becoming an advocate for victims of pediatric brain cancer. She’s raised more than $800,000 toward that goal and hopes to reach $1 million this year.

“It’s the reason I’m racing tomorrow,” she told the Los Alamos Daily Post Friday. “I’m looking forward to this adventure. I have to do it for the kids. Tomorrow will be really fun and it will be worth it. We’ll take it slow. My goal is to finish.”

Today’s 50K ultramarathon is not Telford’s first long race. In 2012, she fulfilled a lifelong dream by competing in the Ironman World Championships in Kona, Hawaii.

“I’m doing what I want to do,” Telford said. “Brain cancer is the number two killer of children. I hope if I live another 10 years, I’ll see a cure. We are so close.”

“I carry the kids with me,” Telford said. “I consider myself lucky to have had the experiences that these kids may never get to have.”

One reason Telford is running in Los Alamos is to prepare herself for the altitude challenges she will face running the Rim to Rim to Rim Ultra Marathon later this year. Once again, Hall and Domnarski will be at her side.

Hall, whose father died of brain cancer, hopes to get a race against the disease going in Los Alamos.

“I know a number of people in Los Alamos who have had brain cancer. I’d like to involve those who have dealt with the disease,” Hall said. If you’d like to help, contact Hall at hall@scieds.com.

Domnarski teaches at Virginia Run Elementary School and volunteers for Happy Feet, an organization that helps girls in grades 4-6 prepare for their first 5K race. Today’s race is her first ultramarathon.

One of the things kids like that Domnarski trains are the temporary tattoos Telford sends them. The tattoos match her own permanent tattoo on her inner wrist that reads “Hope.” “I look down on my wrist and I see ‘hope,’ ” Telford said. “Now hundreds of kids see it, too.”

May is Brain Cancer Awareness Month. Telford encourages people to “go gray in May” and make a contribution this month.

To help Telford raise funds for pediatric brain cancer research, visit abc2.org. This is the non-profit where Telford directs funds. It was started by Jean and Steve Case. Steve lost brother to brain cancer when he was a child.