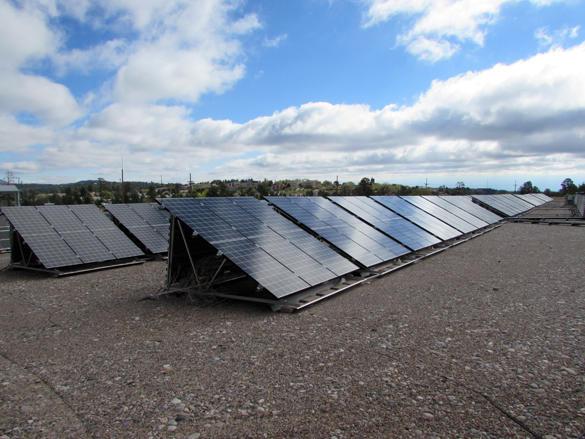 The Board of Public Utilities failed to pass a motion to purchase an additional photovoltaic solar array adjacent to the exisiting array on the former County landfill. Photo by Kirsten Laskey/ladailypost.com
By KIRSTEN LASKEY
Los Alamos Daily Post
kirsten@ladailypost.com

Despite expressing interest in adding more renewable energy to the County’s electrical generation portfolio, the Board of Public Utilities (DPU) did not pass during its regular meeting Aug. 22 a motion that recommended entering a 25-year power purchase agreement with Los Alamos Solar II, LLC.

If the motion had been approved, the developer would install a 1.32 megawatt (MW) photovoltaic solar array adjacent to the existing 1MW array on the closed landfill to deliver unfirm, photovoltaic electricity to the DPU at a price of $58.50 per megawatt hour.

It seemed better to wait, Johnson said, explaining he felt confident the price for renewable energy could become more affordable in the future. “I’ve thought for a long time that time is on our side when it comes to renewables,” he said.

He added that while the increase to the blended cost of power is miniscule, the County would be paying more for a megawatt hour than is necessary, especially when comparing the proposed project to other potential options. Johnson continued saying that the project at $58.50 per MWh is not a good deal for the rate payers when DPU is currently exploring other potential resources ranging from $32 to $45 per MWh.

“The landfill will always be there if we want to revisit this in the future,” Johnson said.

McLin felt the project posed concerns with future disposal and potential liability for the County.

He asked if the County decides to take total ownership of the photovoltaic panels at the end of the 25-year agreement or if Los Alamos Solar goes under, will it be on the County to dispose of the panels when they are no longer usable?

“There is some controversy that solar panels are hazardous waste, which could become a liability issue for the County,” McLin said.

He also asked if the project would impact individuals who have their own solar panels. He said he was worried that the 1.32-megawatt project coupled with the existing landfill megawatt and customer-owned roof-top solar would cause the County to incur penalties by exceeding its ability to stay within its two-megawatt bandwidth limit through Public Service Company of New Mexico, the balancing authority for DPU’s power. McLin inquired whether DPU would mandate its roof-top solar customers to purchase smart inverters at their own expense so DPU could control the power from these resources to stay within its bandwidth?

Deputy Utilities Manager Steve Cummins explained that for the present and through probably the next decade, DPU’s Power System Operators can use the County battery storage, as well as day-ahead scheduling that consider solar generation forecasts to stay within the bandwidth limits. According to Cummins, smart inverters were envisioned by the Future Energy Resource Committee as a possible solution in the County’s future, if and when the amount of roof-top solar exceeds DPU’s ability to manage it.

When it does, Cummins said that DPU has considered several alternatives for dealing with the issue. In a follow up conversation, Cummins said that these alternatives include “looking at battery storage, fast response Reciprocating Internal Combustion Engines or market products to manage our resources as a prudent utility practice.”

According to agenda documents, indicative bids were presented to BPU in September of 2018. The board asked staff to move forward with issuing a request for proposals for the project.

Ultimately, Olbrich said the proposal submitted by PNE, which would establish Los Alamos Solar to operate the system, was selected over the other offerors primarily due to its cost.

The estimated output, he said, was 1.32 megawatts or 2250 megawatt hours per year. The power purchase agreement would be for 25 years.

He added that the solar panels would only generate 0.4 percent of the County’s energy load.

“This is non-firm power,” he said. “So, it’s whenever the sun shines on it. That’s when we get power. Also, I want to be clear this has no escalation. So, this is a fixed price for the entire term of the agreement. For the entire 25 years it’s fixed at $58.50 per megawatt hour.”

He said it would reduce the County’s use of fossil fuel energy roughly by 1,000 metric tons of carbon dioxide a year.

Olbrich added Los Alamos Solar would do all the operations and maintenance for the 25 years. However, he said there would be buy-out options for the County at year six, 10, 15, 20 and 25. At the end of the 25 year-term, Olbrich said the County could buy the system for $1 and take over operations and maintenance, extend the purchase power agreement or remove the panels at the seller’s expense.

A requirement of every staff report to Board and Council requires a statement about alternatives to the proposed recommendation. Staff reported that they are investigating other renewable energy options to step the County towards its carbon neutral goal by 2040.