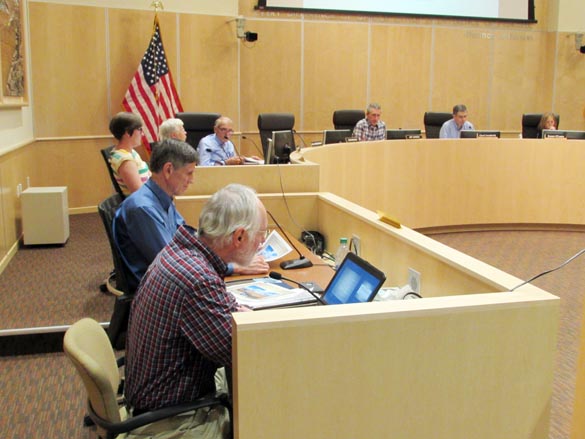 The wastewater treatment plant in White Rock needs to be replaced and a discussion on how to finance the project was held during the Los Alamos County Council and Board of Public Utilities (BPU) joint work session Tuesday, Sept. 19, in Council Chambers.

While the Department of Public Utilities (DPU) staff presented several options, the majority spoke in favor of a plan that proposes to construct of the new wastewater treatment plant in 2020. The plan also calls for designs of a full scale replacement of the White Rock plant as well as a 12-year upgrade design of the Los Alamos plant in 2019.

To achieve this, the finance option proposes user fees as well as $1.9 million in a gas fund cash balance transfer to pay off approximately 20 percent of the existing debt service on the Los Alamos wastewater treatment plant. Additionally, it is stated in the plan that the remaining debt on the Los Alamos treatment plant would be refinanced as well as the new debt for the White Rock plant for 30 years.

However, DPU Manager Tim Glasco told the Los Alamos Daily Post in a meeting held with the New Mexico Environment Department Construction Programs Bureau just prior to the joint BPU and County Council work session, DPU was informed that any refinancing of debt on the Los Alamos Wastewater Treatment Plant could not involve a 30-year amortization term, meaning it could not be paid off with a fixed repayment schedule in regular installments over 30 years.

Also, the plan marks $75,000 for capital improvement project (CIP) throw-away expenditures. Glasco explained this does not involve the County’s CIP fund; rather, DPU has its own fund for CIP projects. He explained the White Rock plant has reached the end of its life and DPU will need to invest money in the plant to keep it operating. However, as soon as the new plant is built, the existing treatment plant, including its improvements, will no longer be needed or used.

The positive with building the new plant sooner rather than later is it decreases the amount of throw-away CIP expenditures that will be needed for the existing plant. In fact, according to the agenda documents, if it is decided to build the new plant by 2020, it would have a savings of $375,000.

A third option suggests 4 percent in FY 2019 and then no increases the final two fiscal years.

All the finance options propose transferring a portion of the gas fund cash balance to the wastewater fund. According to agenda documents, this would be used to partially pay off existing debt on the Los Alamos wastewater treatment plant.

DPU Deputy Manager Jack Richardson said the fund transfer would be beneficial. He noted it would help pay off debt and reduce the principal. He added it would save the department between 400,000-$500,000 in annual payments. This is savings that could be passed onto the customers, he said. Richardson emphasized however that the department wants to be conservative with how much money is transferred from the gas fund. He said they do not want to take so much out that it would require a gas rate increase.

Councilor James Chrobocinski spoke in favor of  the transfer. ”I think the transfer of the money … makes the most sense … and to fund something we desperately need,” he said.

BPU Member Carrie Walker also supported the finance option. “I am happy to see some options for cash infusion,” she said.

BPU Member Katherine Taylor agreed. “I really feel it’s important to do that early build and not wait,” she said.

BPU Chair Jeff Johnson said he concurred with the sentiment of his fellow board members and the County Council. Although he spoke in favor of the fund transfer, Johnson said he was nervous about potentially having an endless string of 8 and 6 percent rate increases.

Still, Johnson said there is an opportunity to start the process to replace the White Rock plant sooner rather than later. Furthermore, he said, “Theses are good ideas proposed by the department and I look forward to seeing them fleshed out.”

Councilor Chris Chandler said she was approaching this with some skepticism. She wondered, in order to do this finance option, if it would require an amendment to the ordinance.

Vice Chair Susan O’Leary said she wasn’t concerned about needing to make any ordinance amendments but she felt the Council needs to have some kind of mechanism to evaluate the department’s rates.

O’Leary said,  “I think we have a responsibility to evaluate rates,” adding it doesn’t need to be every year but perhaps every three years. She explained the council has changing personnel  and having a mechanism in place would serve as a reminder to new councils that they have a responsibility to review rates. “It’s a system that will facilitate good governance in my opinion .. it’s just a good system to support the council (and the community).”

Council Chair David Izraelevitz suggested another alternative. He wondered if rather than transferring money from the DPU gas fund to the sewer fund, the money could be loaned interest-free to the sewer fund with the expectation that it would returned to gas fund.

Department of Public Utility Deputy Manager Bob Westervelt called the idea “interesting.” He said although it has not been done before it could be workable.

Glasco said the current rate ordinance prohibits taking money from one utility fund and putting it into another. Money can be loaned from one fund to another but can’t be given as a grant or an interest-free loan. Possibly changing the ordinance for certain unique circumstances is being considered, he said. Glasco added there is the opinion that DPU should just borrow the money from the state, which is offering a very attractive interest rate: 2.375 percent.

The agenda documents also reported that DPU would also need to develop a rate structure scenario to maintain gas fund cash reserves and, if the early build plan is chosen, the department would need apply for a Clean Water State Revolving Fund loan/grant application this year.