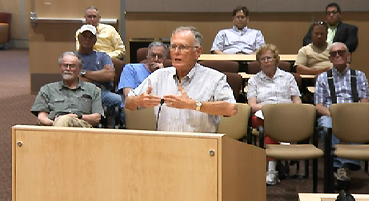 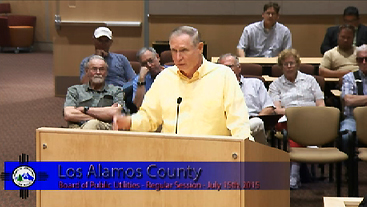 Former Congressman Bill Redmond commended the FER final report but said he hasn’t seen the public impact to surrounding communities such as to the Navajo Nation and to area neighbors mentioned anywhere. He asked that the impact be considered. Screen Shot/LAC

Following a presentation this evening by Robert Gibson, chair of the Future Energy Resources Ad Hoc Citizen’s Advisory Committee on the committee’s final report to examine issues related to future energy resources (FER) in the County, specifically those related to distributed generation, the Board of Public Utilities unanimously accepted the report.

During this evening’s BPU meeting in Council Chambers at the Municipal Building, Board members also moved to consider the findings in the final report at a future meeting and forward that report to the County Council.

BPU members commended the “great amount of time and the diligent efforts put forth by the committee in preparing the final report.” During public comment, citizens also expressed appreciation for the quality of the report and concern was raised that the board not place the report on a shelf.

As background, at its February 2015 meeting, the BPU voted to solicit two public-at-large members, one residential PV owner member, one business community member, one Los Alamos Public Schools member, one member from Los Alamos National Laboratory and one member from the County’s Environmental Sustainability Board for an ad hoc Citizen’s Committee to examine issues related to future energy resources (FER) in the County, specifically those related to distributed generation.

DPU staff attended and provided assistance to the Committee at each of its meetings, but most of the work was performed by the Committee members themselves over four-and-a-half months.

The FER committee began meeting in March and continued until July, after which the attached final report was completed. As requested by the Board, the Committee developed recommendations for: