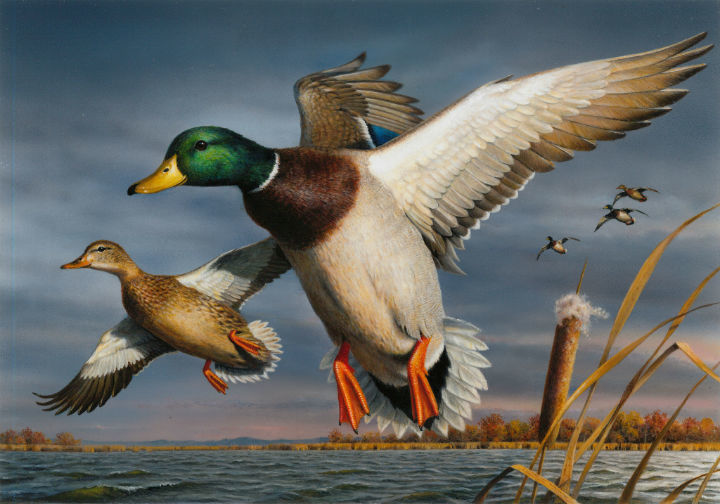 WASHINGTON, D.C. – Bob Hautman, an artist from Delano, Minn., is the winner of the 2017 Federal Duck Stamp Art Contest. The announcement was made Saturday by U.S. Fish and Wildlife Service Principal Deputy Director Greg Sheehan at the annual art contest, held at the University of Wisconsin-Stevens Point at the Noel Fine Arts Center.

Hautman’s acrylic painting of a pair of mallards will be made into the 2018-2019 Federal Migratory Bird Hunting and Conservation Stamp, or Duck Stamp, which will go on sale in late June 2018. The Service produces the Federal Duck Stamp, which sells for $25 and raises nearly $40 million each year to provide critical funds to conserve and protect wetland habitats in the National Wildlife Refuge System for the benefit of wildlife and the enjoyment of people.

“Our nation’s waterfowl hunters and other sportsmen and women have a long tradition of leading the way in conserving wildlife and habitat,” said U.S. Secretary of the Interior Ryan Zinke. “There is no better example of this than the Duck Stamp, one of the most successful conservation programs in U.S. history, through which hunters have contributed hundreds of millions of dollars since its inception eight decades ago.”

“Congratulations to Bob Hautman on his win today,” Sheehan said. “He is part of a collection of talented wildlife artists whose work has helped conserve habitat not just for waterfowl, but for a vast diversity of wildlife, and helped create and maintain hundreds of places where hunters, anglers and outdoors enthusiasts of all stripes can enjoy their passion.”

Of 215 entries in this year’s competition, 12 entries made it to the final round of judging. Eligible species for this year’s Federal Duck Stamp Contest were the mallard, gadwall, cinnamon teal, blue-winged teal and harlequin duck.

Greg Alexander of Ashland, Wi., placed second with his acrylic painting of a cinnamon teal; Christine Clayton of Sidney, Ohio, took third place with her oil painting of a blue-winged teal.

In 2000, Clayton won the National Junior Duck Stamp Art Contest with a painting of a northern pintail. She was 17 at the time.

The judges for this year’s Federal Duck Stamp Contest were: Dr. Jacob Straub, a waterfowl biologist and the Wetlands and Waterfowl Conservation Chair in UW-Stevens Point’s College of Natural Resources; Jane Kim, an artist and science illustrator; Robert Spoerl, a lifelong hunter and conservationist with a passion for waterfowl; Tim Pearson, an artist – and flyfishing guide – who paints mostly in watercolors, inspired by the waters and surrounding wilderness of Lake Superior; and Richard Prager, an avid collector of Federal and Junior Duck Stamps and Duck Stamp remarques and original artwork.

“A huge thank-you goes to the faculty, staff and students of the University of Wisconsin-Stevens Point for hosting the contest this year,” Sheehan said. “The UW-Stevens Point’s College of Natural Resources is one of the nation’s premier natural resources programs and has historical connections with the Service as the alma mater of a number of our staff and top agency leaders.”

Waterfowl hunters age 16 and older are required to purchase and carry the current Federal Duck Stamp. Many non-hunters, including birdwatchers, conservationists, stamp collectors and others also purchase the stamp in support of habitat conservation. Additionally, a current Federal Duck Stamp can be used for free admission to any national wildlife refuge that charges an entry fee.

Ninety-eight percent of the proceeds from sales of the Federal Duck Stamp go to the Migratory Bird Conservation Fund, which supports the protection of migratory bird habitat within the National Wildlife Refuge System.

You can contribute to conservation and America’s great conservation tradition by buying Federal Duck Stamps at many national wildlife refuges, sporting goods stores and other retailers, through the U.S. Postal Service, or online at http://www.fws.gov/birds/get-involved/duck-stamp/buy-duck-stamp.php.