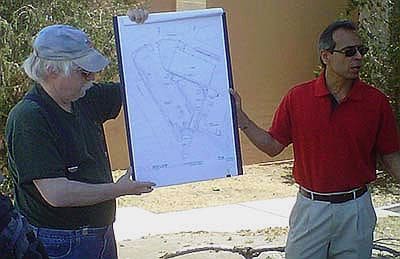 Photo: The Los Alamos High School Bus Loop Committee met with the architect July 3 to review options that were presented at Tuesday’s School Board meeting. Courtesy/LAPS

Say goodbye to a dirt lawn and a parking lot with helter-skelter lanes at Los Alamos High School.

The proposed bus loop and landscape project were approved at Tuesday’s school board meeting.

The bus loop project, which received a unanimous vote, involves replacing the existing sidewalk along Smith Auditorium and P-Wing with a new six-foot wide sidewalk.

Additionally, a bus loading and unloading zone will be created along with a visitor/administrative parking area in the corner of the bus loop.

The bus loop project is expected to begin as soon as possible and will consist of two phases.

Phase one, according to a LAPS press release, will focus on sidewalks, drainage, fencing, the seal/fog coat, patchwork where appropriate and preliminary striping.

This should be done before the school year begins in August.

Phase two will take place in the future when the parking lot is resurfaced and given a new coat of asphalt.

Once the bus loop is constructed, buses will enter from Diamond Drive and exit from Orange Street while student drivers will arrive in the parking lot from Orange Street and parents will drop students off in the lot by Sullivan Field or the Jock Lot.

The decision to move forward with the project was greeted with a round applause Tuesday.

Janine Tulenko, a member of the bus loop committee, emphasized that “time is of the essence. If (we) don’t move forward on this now, we will face a real dilemma come the beginning of the school year.”

Other projects for LAHS were approved during the meeting including a landscape design option.

Board President Kevin Honnell explained to the Los Alamos Daily Post that the committee in charge of the landscape would probably tweak the design details to accommodate student and community input, and as a result, the exact figure for the project is not known.

Therefore, the board approved building in contingency funds in the project so that any minor changes that occur will be covered.

This design features 12 new trees, replacing some sidewalk in front of Duane Smith Aditorium to the Information Media Center, a memorial garden and “a whole lot of grass,” Superintendent Gene Schmidt said.

The memorial garden will be a partnership between the Rotary Club and LAPS. It will honor deceased LAHS students.

Schmidt commented that Public Schools Facilities Authority offered assistance with the project along with Rotary and Los Alamos County.

He said all three designs are nice and urged that the project go forward for the students, who are excited to get their outside space back.

“We owe it to them to give them a nice place to gather,” Schmidt said.

Board Secretary Melanie McKinley said she preferred students congregate in another spot; saying she didn’t feel hanging out in front of Diamond Drive was safe.

LAHS Principal Sandy Warnock agreed saying, if the trees were moved closer to the school, the students would stay further from Diamond Drive.

She added that she like the first option the best, explaining Option 3 had too much “frou-frou stuff. Maintenance-wise I think (option) number one is the best.”

Honnell said he felt comfortable moving forward with the project in order to avoid another year with no landscaping and a giant “mud pit.”

He said that the first option closely resembles the original landscape, which has worked well for 60 years and is something the town and students are comfortable with.

Board Member David Foster also said he felt the project should go forward and be left it to the district administrators and Warnock to get input on the design.

Not everyone agreed. McKinley argued that this was a big issue to the community and it warranted getting more input and having the landscape plan be more defined.

Ultimately, the motion passed 5-1, with McKinley casting the opposing vote.