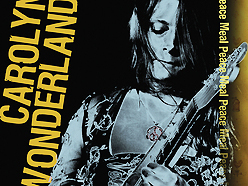 The show starts at 7 p.m. and is free. The Series is paid for by donations from Los Alamos County and many Los Alamos businesses, professionals and friends.

You can see who these sponsors are and read about our acts at www.gordonssummerconcerts.com.

If you have any comments on the Series or if you’d like to make a request for the 2013 Series, please email me at russ@gordonssummerconcerts.com.

Please keep in mind that we have a budget and can’t afford too many of the acts that perform at Madison Square Garden and that the shows must be family friendly.

If you have tons of big bucks to donate so Northern New Mexico can have bigger name acts appear here for free, that’d be most appreciated but the shows must still be appropriate for all ages.

Carolyn Wonderland is a blues and blues/rock artist with diverse influences from elements of country, swing, zydeco, surf, churchy gospel-soul, jazz, Latin and soul. (I’ve told many young aspiring musicians that if you want to be a musician, you must listen to music, all kinds of music.)

Carolyn is a great guitarist and singer. She’s played the world’s best venues, including Public TV’s Austin City Limits, the Sturgis Motorcycle Rally, all the Texas and New Mexico clubs as well as the European clubs.

I wouldn’t be surprised if she played Madison Square Garden with some of her friends and touring pals like Willie Nelson, Buddy Guy, Los Lobos, Johnny Winter, Ray Wylie Hubbard, Asleep At The Wheel and Robert Earl Keen.

Carolyn has a powerful, whiskey soaked voice and has often been compared to another reddish-haired East Texas sensational blues-rocker, Janis Joplin.

Her guitar playing reminds many of another Rock Hall of Fame Texas musician, Stevie Ray Vaughan.

Here’s a few anecdotes about Carolyn that I think are pretty cool. She’s married to A. Whitney Brown, a comedian and writer for shows like Saturday Night Live, Comedy Central’s The Daily Show and the liberal radio network’s Air America Radio.

Brown is quoted as saying he’s “…a vegetarian not because he loves animals. I’m a vegetarian because I hate plants.”

Last year Carolyn played a show for us at Del Norte Credit Union and A. Whitney was there. He grows incredibly hot chilis in Austin and makes salsas that’ll burn your spoon in two.

Their 2011 wedding was officiated by ex Monkee, Michael Nesmith. Nesmith lived in Nambe for years and used to buy his music at Gordons’ CDs and Tapes.

Mike’s a cool guy with a gorgeous French wife but he doesn’t enjoy being a Monkee anymore. His mother invented “White-Out.” Mike Nesmith also produced and sings back-up on the Elmore James classic, “Dust My Broom” on Carolyn’s latest CD, “Peace Meal.”

That album was also produced by Ray Benson of Asleep At The Wheel and by Bob Dylan’s guitarist, Larry Campbell.

One day a couple of years ago, Ray Benson and Dylan were talking backstage before a show about Texas musicians when Dylan started in on how much he liked Carolyn Wonderland.

Ray called Carolyn and told her she should come to the gig because Dylan likes and wants to meet her. She drove 100 mph to catch Bob and they jammed for hours after the show.

Carolyn doesn’t like to drop names but Bobby Dylan is a friend and an admirer.

Ray Benson says “Carolyn’s got that unbelievable, incredible voice, one of the greatest voices of our time and that’s not an overstatement … she’s got the range and the emotion. Comparisons to her and Joplin are always there since she’s rooted in blues and R&B, but it’s still rock & roll, and like Janis, Carolyn can take it into country. She’s also an incredible guitar player and a great person, so humble. The combination is disarming and totally real. That’s magic.”

“LA Times” on a recent concert … “Carolyn Wonderland is the real deal. She’s an amazing guitarist. She whistled a solo. She even played trumpet, and damn can she sing.”

“Boston Herald”… “A dollop of Janis Joplin, a slice of Stevie Ray Vaughan and a big load of soulful individuality … a seething hot Texas singer- guitarist.”

Carolyn Wonderland’s photo is on the cover of the June 2012 issue of “Guitar Player Magazine.”

This Fall, she’ll tour Japan, Switzerland, Germany and the Netherlands. That would be great to catch those shows but she is playing White Rock on Friday.

On Friday, Aug. 24, we’ll be back at Ashley Pond for a concert by the ska, dub, reggae and rock band, Yellow Dubmarine.

Hope to see you smiling on Friday at the show!