Black Carbon Much Larger Cause of Climate Change Than Previously Assessed 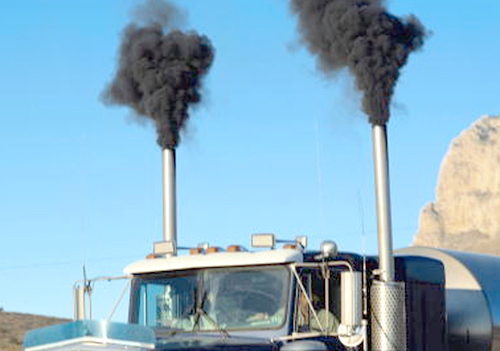 Cutting back on emissions from diesel engines could slow global warming immediately, according to a new study. Courtesy/EPA 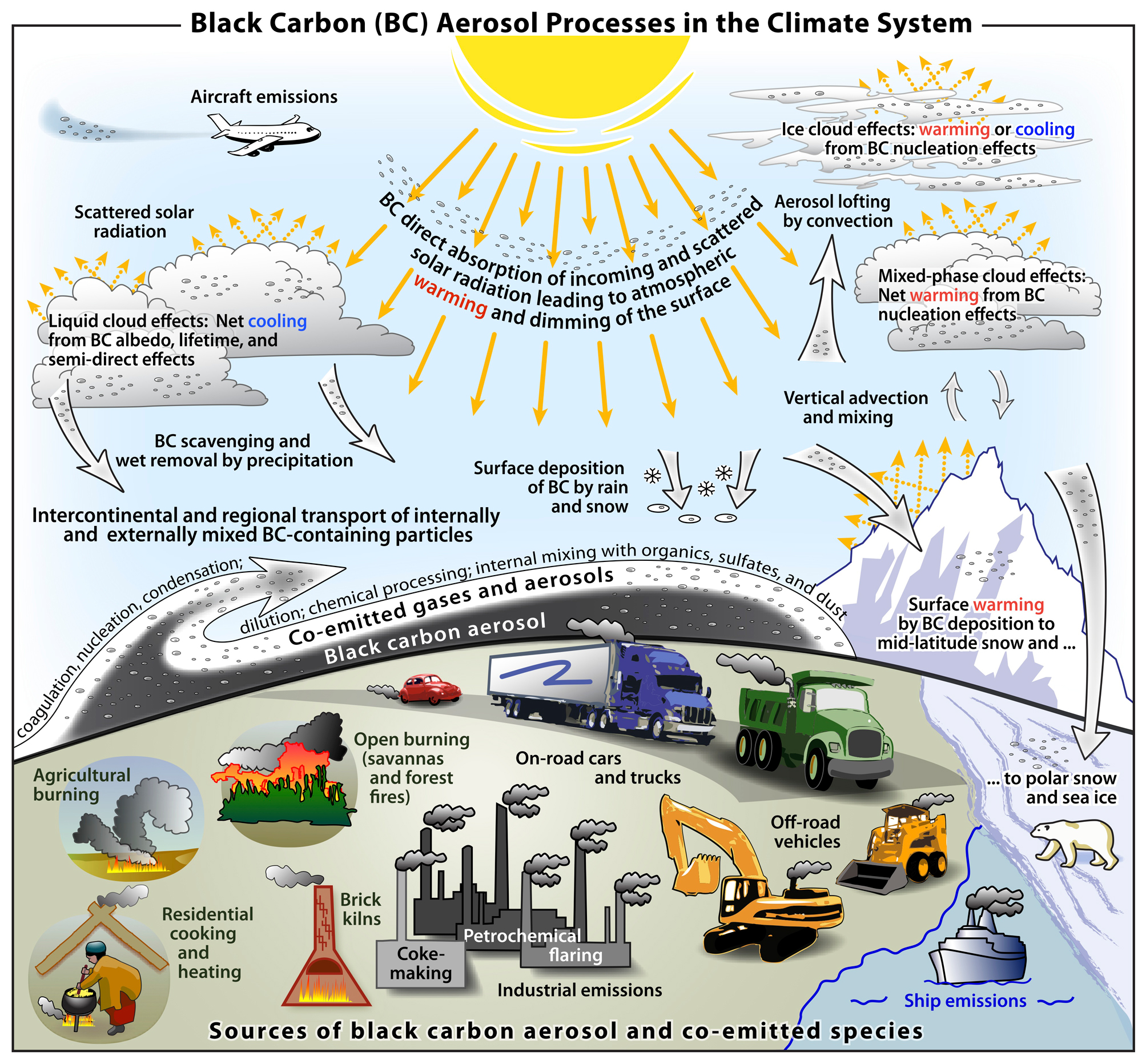 Schematic overview of the primary black carbon emission sources and the processes that control the distribution of black carbon in the atmosphere and determine its role in the climate system. Courtesy/ AGU

WASHINGTON—Black carbon is the second largest man-made contributor to global warming and its influence on climate has been greatly underestimated, according to the first quantitative and comprehensive analysis of this pollutant’s climate impact..

The direct influence of black carbon, or soot, on warming the climate could be about twice previous estimates, according to an in-depth study published today in the Journal of Geophysical Research-Atmospheres, a publication of the American Geophysical Union.

Accounting for all of the ways black carbon can affect climate, it is believed to have a warming effect of about 1.1 Watts per square meter (W/m2), approximately two-thirds of the effect of the largest man made contributor to global warming – carbon dioxide.

“This study confirms and goes beyond other research that suggested black carbon has a strong warming effect on climate, just ahead of methane,” said co-lead author David Fahey of the U.S. National Oceanic and Atmospheric Administration (NOAA). The study, a four-year, 232-page effort, led by the International Global Atmospheric Chemistry (IGAC) Project, is likely to guide research efforts, climate modeling, and policy for years to come, the authors and other scientists familiar with the paper said..

The report’s best estimate of direct climate influence by black carbon is about a factor of two higher than most previous work. This includes the estimates in the 2007 Intergovernmental Panel on Climate Change (IPCC) Assessment, which were based on the best available evidence and analysis at that time.

Scientists have spent the years since the last IPCC assessment improving estimates, but the new assessment notes that emissions in some regions are probably higher than estimated.

This is consistent with other research that also hinted at significant under-estimates in some regions’ black carbon emissions.

The results indicate that there may be a greater potential to curb warming by reducing black carbon emissions than previously thought.

“There are exciting opportunities to cool climate by reducing soot emissions but it is not straightforward,” said co-author Professor Piers Forster from the University of Leeds’s School of Earth and Environment in the United Kingdom. “Reducing emissions from diesel engines and domestic wood and coal fires is a no-brainer, as there are tandem health and climate benefits. If we did everything we could to reduce these emissions we could buy ourselves up to half a degree (Celsius) less warming–or a couple of decades of respite.”.

However, the international team urges caution because the role of black carbon in climate change is complex. “Black carbon influences climate in many ways, both directly and indirectly, and all of these effects must be considered jointly,” says co-lead author Sarah Doherty of the University of Washington in Seattle, an expert in snow measurements.

The dark particles absorb incoming and scattered heat from the sun (called solar radiation), they can promote the formation of clouds that can have either cooling or warming impact, and they can fall on the surface of snow and ice, promoting warming and increasing melting. In addition, many sources of black carbon also emit other particles that provide a cooling effect, counteracting black carbon.

The research team quantified the complexities of black carbon and the impacts of co-emitted pollutants for different sources, taking into account uncertainties in measurements and calculations. The study suggests mitigation of black carbon emissions for climate benefits must consider all emissions from each source and their complex influences on climate.

Based on the scientists’ analyses of these different sources, black carbon emission reductions targeting diesel engines and some types of wood and coal burning in small household burners would have an immediate cooling impact.

Black carbon is a significant cause of the rapid warming in the Northern Hemisphere at mid to high latitudes, including the northern United States, Canada, northern Europe and northern Asia, according to the report. The particles’ impacts can also be felt farther south, inducing changes in rainfall patterns from the Asian Monsoon. Curbing black carbon emissions could therefore have significant impact on reducing regional climate change while having a positive impact on human health by reducing the amount of damage the particles cause to the respiratory and cardiovascular systems.

“Policy makers, like the Climate and Clean Air Coalition, are talking about ways to slow global warming by reducing black carbon emissions,” said co-lead author Tami Bond of the University of Illinois at Urbana-Champaign. “This study shows that this is a viable option for some black carbon sources and since black carbon is short-lived, the impacts would be noticed immediately. Mitigating black carbon is good for curbing short-term climate change, but to really solve the long-term climate problem, carbon dioxide emissions must also be reduced.”

A note from the editors of the Journal of Geophysical Research – Atmospheres, about the significance of this article and the review process the article underwent, is available at http://bit.ly/11vqZFX