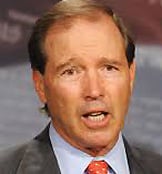 U.S. Sen. Tom Udall
U.S. SENATE News:
WASHINGTON, D.C. ― U.S. Sen. Tom Udall (D-N.M.) led a bipartisan group of senators in filing an amendment Wednesday to require the Department of Health and Human Services (HHS) to publish an unreleased federal study about widespread water contamination from commonly-used chemicals.
According to media reports and publicly available emails, officials at the Environmental Protection Agency (EPA) blocked the release of the HHS report showing that far lower levels of per- and polyfluoroalkyl substances (PFAS) threaten human health than previously known.
In addition to Udall, the amendment was filed by U.S. Senators Jeanne Shaheen (D-N.H.), Rob Portman (R-Ohio), Sherrod Brown (D-Ohio), and Joe Manchin (D-W.Va.).
The senators filed the amendment to the National Defense Authorization Act (NDAA), which is pending before the Senate. The senators’ amendment would require the release of the HHS study that reportedly increases warnings about human exposure to PFAS chemicals, which are widely used commercially and which are found in water systems that serve millions of people across the country. The Pentagon has identified 36 U.S. military installations across the country where on-base drinking water contamination from PFAS chemicals exceeds EPA’s safety levels.
Publicly available communications show that the HHS study was completed in January. But, according to a POLITICO report, EPA and White House officials stepped in to block the release of the study because they saw it as a “public relations nightmare.” In addition to requiring the release of the HHS study, the amendment would require that HHS report to Congress about any changes that were made to the PFAS study after January 2018 – when the report was finalized.
“New Mexicans and Americans should be able to trust that their government is doing everything it can to protect their families’ health and safety. But how can they, when they hear reports like this — of a secretive effort to block the release of information about widespread water contamination?” Udall said. “The administration’s job, especially at agencies like EPA and HHS, is to look out for public health, not to hide critical safety information through a cynical public relations strategy. Our bipartisan amendment requires transparency and accountability from the administration – and it upholds the public’s right to know what risks are posed by chemicals they encounter every day.”
“Communities in New Hampshire and many across the country have been exposed to PFAS chemicals and other harmful emerging contaminants, so it’s imperative that our residents have the information they need about the potential health implications facing their children and families,” Shaheen said. “The Trump administration needs to be transparent with the American people and release these toxicology reports so those who’ve been exposed have all the facts. I fought to establish the first-ever nationwide PFAS health impact study in last year’s National Defense Authorization Act because this is such a critical issue in the Granite State, and I’m grateful for the continued efforts and bipartisan support from Senators in other affected states to move this issue forward. I’ll continue to work across the aisle to help secure the release of these delayed reports.”
“It is important to ensure EPA’s health advisories are up to date and reflect the best available science and information. I hope EPA and HHS release this report immediately to ensure that the men and women serving our country, as well as our communities supporting them, are drinking clean, safe water. I will continue to work with my colleague, Senator Shaheen, on our legislation, the Safe Drinking Water Assistance Act, to improve federal efforts to identify the public health effects of emerging contaminants, like PFOA and PFAS,” Portman said.
“Keeping information from people about the health and safety of their water is disgraceful. The EPA and HHS must release this report immediately and work with local communities to make sure their water is safe,” Brown said.
“I’m glad to join my colleagues in filing this amendment to the must-pass NDAA that will require HHS to release a study on PFOA that details the effects this chemical has on humans. All West Virginians deserve to drink clean water and when the EPA tries to block the release of a report on chemicals that could have negative impact on them, they need to make it right. In 2016, Parkersburg, Martinsburg and Vienna were notified that drinking water sources were unusable because of unacceptable levels of PFOA. These issues persist in our state and that’s why we need HHS and the EPA’s help on this,” Manchin said.
Menu
Los Alamos
43°
Fair
6:36am5:58pm MST
Feels like: 34°F
Wind: 18mph W
Humidity: 16%
Pressure: 29.82"Hg
UV index: 4
SunMonTue
37/21°F
39/25°F
48/30°F
Weather forecast Los Alamos, New Mexico ▸