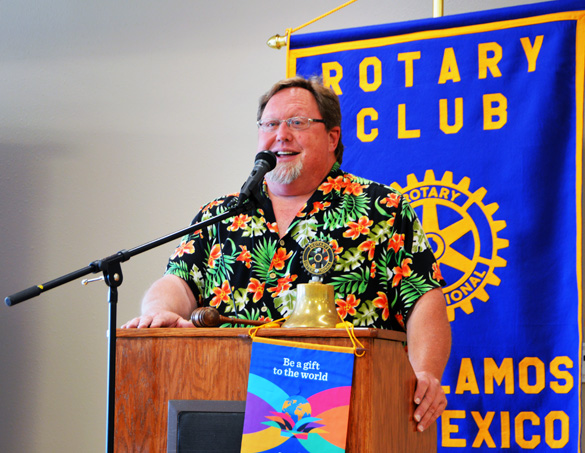 Craig Smith regaled members of the Rotary Club of Los Alamos Tuesday, with anecdotes and insights from his new biography, Visions and Voices: John Crosby and the Santa Fe Opera.

As a classical music critic for the Santa Fe New Mexican for 20 years, Smith covered the opera and its founder for many years and was uniquely qualified to write the life story of one of the great cultural giants of modern times.

Smith also is an excellent speaker. Very quickly he brought the local audience into the story by asking for a show of hands for those who have attended the opera this year – quite a large percentage.

“Los Alamos has always been a large part of the Santa Fe Opera from the very early years, in part because John Crosby became familiar with this area in 1940-41,” Smith said.

He recalled that while Crosby was attending a private school in Connecticut in his early teens he was diagnosed with sinusitis and his parents were advised to send him to a high, dry climate for a cure. After looking around, they settled on the Los Alamos Ranch School, that exotic attraction that lured J. Robert Oppenheimer, Gore Vidal, Sterling Colgate and others to New Mexico around that time.

“So from 1940-41 during that year he was here, and he actually recovered extremely well and he was able to go back to Connecticut healed, and he was very happy about that,” Smith said. “He was an outdoor person. He loved to hike, horseback ride, skate, ski – anything of that nature – and his being in Los Alamos was a big help for him. He enjoyed it tremendously besides getting well.”

Smith’s book is a revealing portrait of a singular man, driven to realize an almost impossible cultural ambition. The strength of character and determination and discipline that requires could be applied to almost any major individual achievement.

As Smith tells the story, through good times and bad, you have to laugh and cry.

“He was charismatic, but in a negative way,” Smith said, like other people most of us know who are consistently right but also difficult to please. “You wouldn’t want to go on a road trip with them, but you’re happy to work with them on a project, because you know what they do is going to be good, and it’s going to be unusual and original.”

The proof is in the results, the author suggests: a $22 million annual budget, a $45 million renovation campaign that’s mostly funded, five operas in production this season including a world premiere, mostly sold out.

“It seems that John Crosby was right. And that Northern New Mexico was the right place to build an opera house,” Smith added.