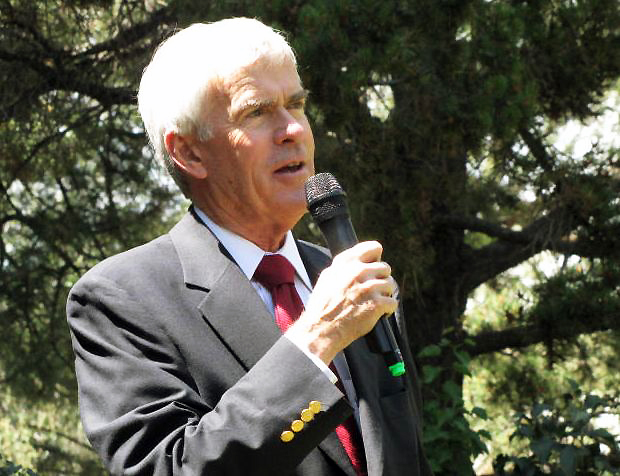 U.S. Sen. Jeff Bingaman spoke today at a gathering at the Los Alamos Historical Museum of the importance of establishing a Manhattan Project National Historical Park with sites in Los Alamos, Oak Ridge, Tenn. and Hanford, Wash. Photo by Carol A. Clark/ladailypost.com

U.S. Sen. Jeff Bingaman, D-N.M., was honored Monday afternoon at a gathering at the Los Alamos Historical Museum for his support of Los Alamos during his 30 years of service in the U.S. Senate.

Los Alamos County Council Chair Sharon Stover presented Bingaman with a plaque of appreciation on behalf of the Council, County and community.

“It is difficult to get anything passed through both the House and Senate lately and I don’t want to leave you with the impression that it will be passed by the end of this year,” Bingaman said of the bipartisan legislation he and U.S. Rep. Doc Hastings, R-Wash., introduced in Congress.

Passage of the bill will mean recognition for the scientific project that he called “amazing” and bring people from across the globe to Los Alamos, he said.

“We’ve got strong bi-partisan support for the bill and that endorsement might help get it passed by the end of this year,” he said.

Bandelier Park Superintendent Jason Lott told the crowd gathered on the lawn behind the museum that the Park Service’s job is preserving history and telling stories.

“The idea that these scientists came here and developed these devices and bombs and then turned around and asked us not to use them is remarkable,” Lott said. “There’s a lot that I don’t think the public knows and that’s the National Park Service’s job to tell those stories … why we did it, what happened, who it saved, who it hurt.”

Lott said many people will be drawn to Los Alamos if this bill is passed and that means there must be good hotels and restaurants and shopping.

“They are going to go back and sell Los Alamos … so let’s start talking about how we are going to put a National Park in the middle of Los Alamos,” Lott said.

“The science of the Manhattan Project not only changed New Mexico but it changed the world,” he said.

Hall explained that his uncle served in WW II and was captured in the Philippines. He endured four years of unspeakable horrors before being told that he would be marched to death in the Bataan Death March … then the bomb was dropped and he came home.

Hall told the crowd, “I hope that story is told as well.”

It has been called the most significant scientific undertaking in the history of mankind. In 1943, some of the world’s greatest minds gathered on a remote desert mesa to unlock the mystery of the basic building blocks of the universe — the atom — and to beat the Nazis in the development of an atomic bomb. It is an undertaking that changed the world forever, impacting scientific, social, military, world, regional, and local history.

In an effort to share this history, the Los Alamos Historical Society has created a “suitcase” outreach program for teachers. The suitcases, with artifacts, photographs, and other information about various eras in Los Alamos history, travel from school to school in Los Alamos and the surrounding area.

The Los Alamos Historical Society preserves, promotes, and communicates the remarkable history and inspiring stories of Los Alamos and its people for our community, for the global audience, and for future generations.

The Los Alamos Historical Museum and Shop are housed in the Guest Cottage of the Los Alamos Ranch School, 1050 Bathtub Row, which was a favorite spot of Gen. Leslie Groves during the Manhattan Project.

The Los Alamos Historical Society is a non-profit, 501(c)-3 organization incorporated under the laws of the state of New Mexico. Membership is open to all persons interested in the purposes of the society. The society is run by a Board of Directors, listed below.

Contributions to the Society are tax-deductible. 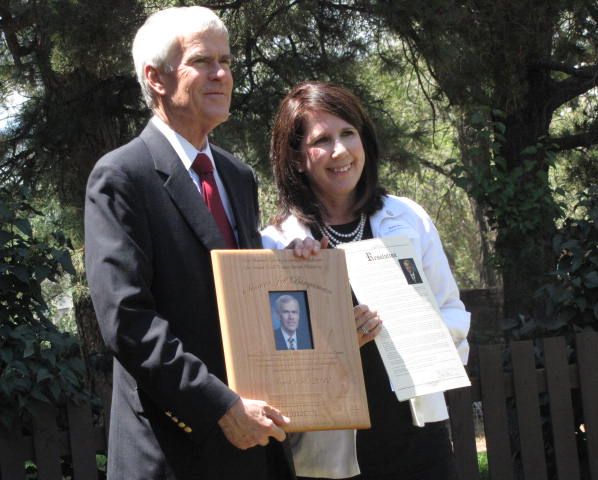 Los Alamos County Council Chair Sharon Stover presents U.S. Sen. Jeff Bingaman with a plaque of appreciation for his 30 years of service in the U.S. Senate. Bingaman retires at the end of this year. Photo by Carol A. Clark/ladailypost.com 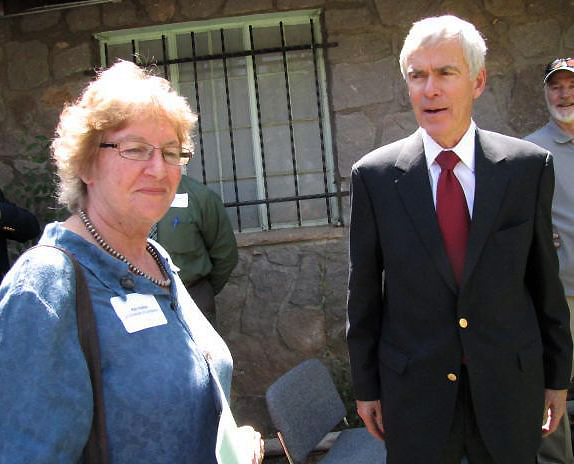 Los Alamos Chamber of Commerce Member Services Coordinator Katy Korkos speaks with Sen. Jeff Bingaman. Korkos spoke during Monday’s event about the bill and how it would compliment the Los Alamos Creative District, a project of the Los Alamos Commerce and Development Corporation that has been adopted by Los Alamos County. Photo by Carol A. Clark/ladailypost.com 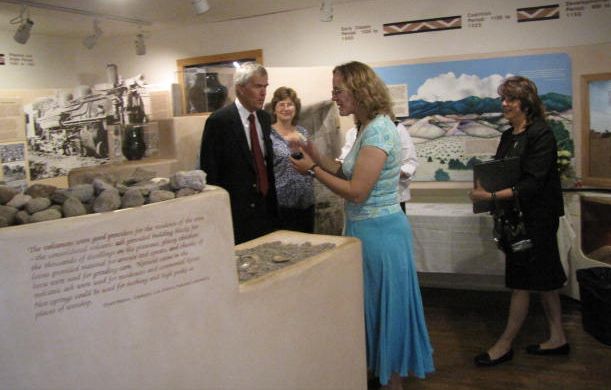 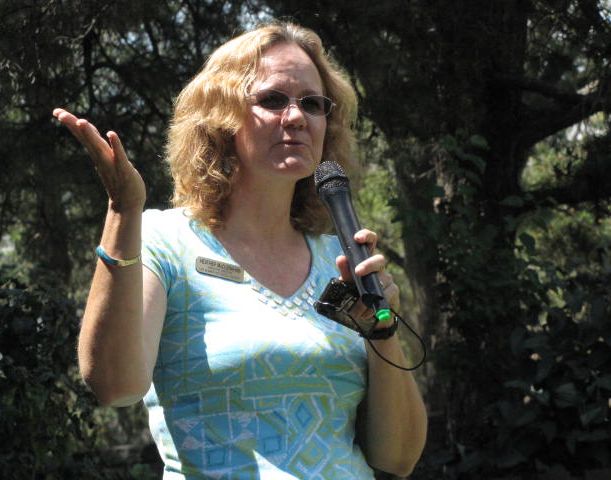 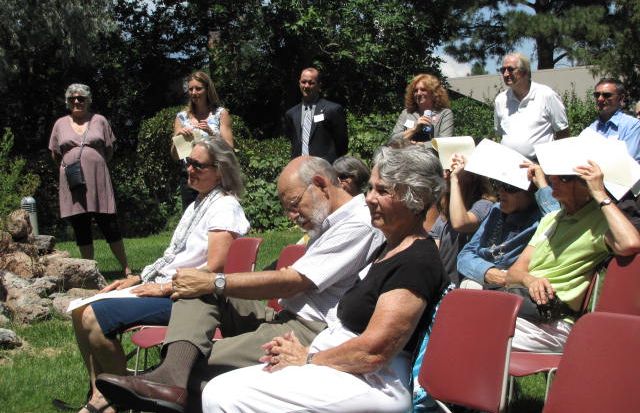 Los Alamos historian Nancy Bartlit, center, is recognized by Sen. Jeff Bingaman and others during Monday’s event for her service to Los Alamos. Photo by Carol A. Clark/ladailypost.com 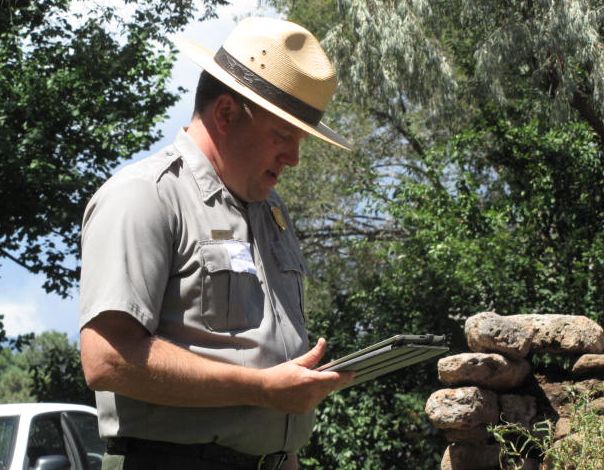 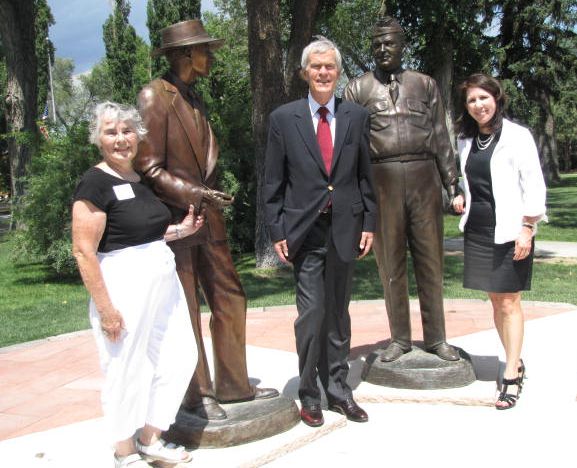 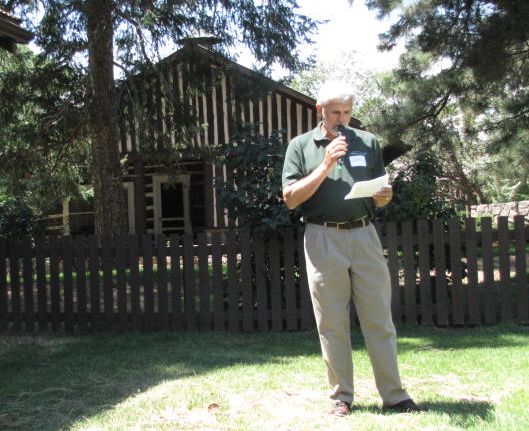 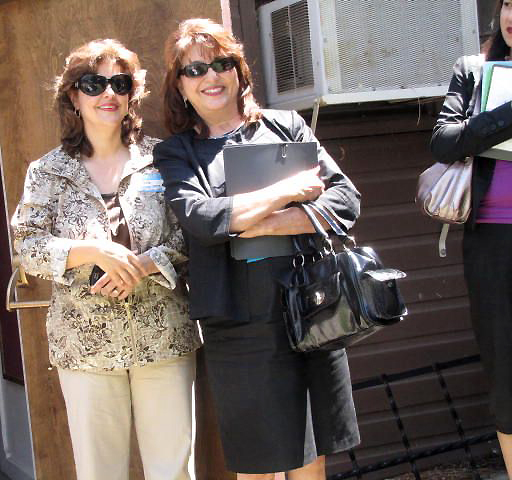 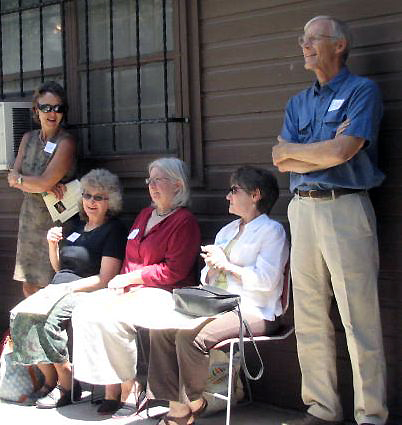