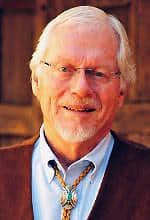 Billy G. Garrett
NMDCA News:
SANTA FE ― The New Mexico Department of Cultural Affairs is pleased to announce the appointment of Billy G. Garrett as interim director of the New Mexico History Museum and Palace of the Governors.
Garrett’s career has focused on management of cultural resources, environmental design, community planning and organizational management. He retired from the National Park Service after 26 years of service, bringing a strong background as a manager and architect, with significant experience with historic structures. A third generation New Mexican, he returned home following retirement, serving as a two-term Doña Ana County Commissioner (2010-2018).
Garrett has a strong commitment to public engagement and public-private partnerships.
As interim director, he will oversee the daily operation of the museum along with development of exhibitions and public programs. The museum campus includes the Pete V. Domenici New Mexico History Museum, the Palace of the Governors, Palace Press, Fray Angélico Chávez History Library, Palace Photo Archives and Native American Artisans Program. It is home to a variety of preservation, exhibition, and educational programs that serve all citizens of New Mexico.
Garrett will use his background and experience to build capacity in the museum, strengthen communications and relationships with the public, and ensure the relevance of programs to communities throughout New Mexico. He will consult with the Office of the State Historian on relevant matters as needed. Garrett will serve as interim director while the Board of Regents for the Museum of New Mexico conducts a national search for a museum director.
“We are excited to have Mr. Garrett step into this important role,” said Debra Garcia y Griego, Cabinet Secretary for the New Mexico Department of Cultural Affairs. “The New Mexico History Museum and Palace of the Governors are cultural treasures in our state. I am confident Mr. Garrett will work tirelessly to ensure their smooth operation while welcoming residents and visitors statewide to experience our rich history.”
“New Mexico has a rich and deep history. Sharing that history recognizes the importance of communities throughout our state,” Garrett said. “I look forward to working with the team at the New Mexico Department of Cultural Affairs—as well as museum docents, friends and supporters—in building on this great tradition.”
Garrett graduated from Las Cruces High School and has a BA of Architecture and an MA in Anthropology, both from Arizona State University. In 1983, Garrett began a career with the National Park Service. He worked as a historic architect at Grand Canyon National Park, on Civil War battlefields, and in the nation’s capital. He was a principal author of the NPS Guideline on Cultural Resource Management (NPS-28), led efforts to redefine the scope and purpose of Historic Structure Reports, and expanded the use of historic buildings for park housing on a systemwide basis. As chief of operations at Gateway National Recreation Area (2005-2009), he directed the work of more than 300 employees through multiple supervisors and was responsible for annual budgets of approximately $35 million.
The New Mexico History Museum and Palace of the Governors are distinctive emblems of this nation’s history. The museum presents exhibitions and public programs that interpret historical events and reflect on the wide range of New Mexico historical experiences. The Museum actively acquires and holds, in perpetuity, collections relating to the heritage of New Mexico and the Southwest. It serves as a history center for research, education, and lifelong learning by delivering quality programs that encourage knowledge, understanding, and appreciation of New Mexico’s diverse cultures. The museum is at 113 Lincoln Ave., steps off the Santa Fe Plaza. It is open 10 a.m. to 5 p.m. daily.
Visit www.nmhistorymuseum.org or call 505.476.5200 for more information.
Menu
Los Alamos
79°
Clear
5:48am8:23pm MDT
Feels like: 79°F
Wind: 8mph S
Humidity: 18%
Pressure: 29.88"Hg
UV index: 0
TueWedThu
90/64°F
91/64°F
88/64°F
Weather forecast Los Alamos, New Mexico ▸