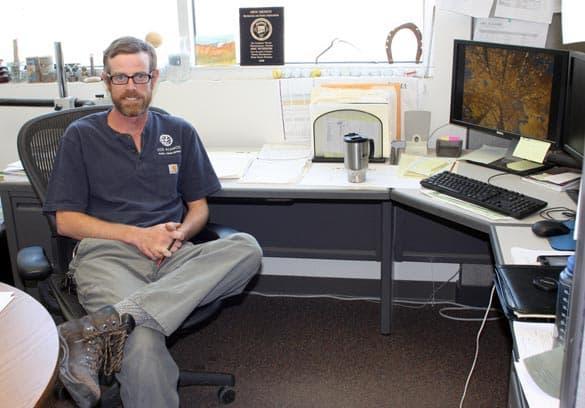 After a start and then a stop, the Los Alamos County’s bike flow trail project is back in motion.

Open Space Specialist Eric Peterson said Tuesday a new request for proposals (RFP) was awarded to Mountain Capital, LLC. The company is tasked with evaluating the original proposed site for the flow trail, Bayo Canyon, as well as evaluating alternative sites that meet the criteria for a bike flow trail.

The bike flow trail will cover seven miles. A bike flow trail is a single use trail geared toward mountain bikers, Peterson said. He explained during a Parks and Recreation Board meeting last year that a flow trail takes the bicyclist on a “terrain-induced roller coaster experience, with little pedaling and braking necessary.”

During an interview with the Los Alamos Daily Post Tuesday, Peterson said the bike flow trail will be unpaved although there could be a potential for wooden crossings.

A lot of attention has been paid to where the flow trail should be located. Peterson said initially Bayo Canyon, which is east of the roundabout on North Mesa Road, was selected because of its topography. Other canyons had obstacles for the trail, he said.

Alternative sites are being measured with a set of criteria. Peterson said criteria includes topography, which side of a canyon the trail would be constructed on, any endangered species habitat as well as any cultural resources that might exist. Additionally, he said sites will be judged on how well they meet the International Mountain Biking Association’s standards.

However, Peterson emphasized the biggest focus is safety.

“Our number one goal is safety for all trail users,” he said.

Safety is a particular concern where the bike flow trail would cross other, multiple use trails. Peterson said at these locations, signage and instituting lower speeds for bicyclists are being considered. Information posted on trail kiosks is another consideration.

Another big focus is gathering public input about the project.

Peterson said the project is a standing topic at Parks and Recreation Board meetings and will be discussed again at 5:30 p.m. today in the Boards and Commission Room at the Municipal Building at 1000 Central Ave.

Additionally, the Los Alamos County website provides constant updates to the project. The public is encouraged to go to https://www.losalamosnm.us/ and then the open space page on the website to check for updates.

Once three to four site options are identified, those will be taken to Parks and Recreation Board as well as to the public for input.

He added a presentation with a schematic design will be shown to County Council and council will be asked to make a decision on whether to approve it.

So far, Peterson said support and opposition for the project seem evenly split.

“I appreciate everybody’s input on this project,” he said.

In a prepared statement Rogers said she felt the bike flow trail was inconsistent with the goals outlined in the 2016 comprehensive plan. Specific concerns, she said, included trail access, safety and historic preservation. She encouraged the County to look at alternatives for the flow trail rather than choosing Bayo Canyon.

Roger said the equestrian community would like to be involved in conservations regarding the bike flow trail.

The idea for the bike flow trail was generated from within the community, Peterson said.

“It was driven from the community and it was pursued by Council,” he said. “Council feels it fits their strategic plan (and) strategic goals.”

The project had hit a few bumps in the road. During a special County Council meeting Dec. 15, Community Services Department Director Brian Brogan reported the single company that responded to the first RFP bidded $450,000 to design the flow trail. This was well above the $50,000 earmarked for the project. As a result, the project was halted until the second RFP was issued.

According to agenda documents from the Dec. 15 meeting, County Council previously set aside monies in order to promote the expansion of mountain biking trails in the area. Initially, the Council set aside $500,000 but ultimately whittled it down to $50,000 to pursue a pilot project on County-owned land. This pilot project was intended to be the bike flow trail.