Bike Flow Trail By No Means A Done Deal 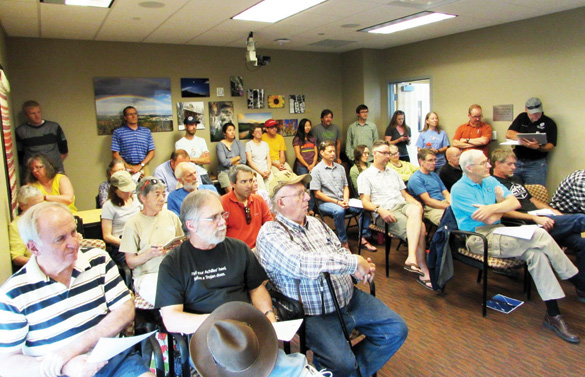 The June 8 Parks and Recreation Board meeting was crowded with community members waiting to give their input on the proposed bike flow trail. Photo by Kirsten Laskey/ladailypost.com

Members of the public packed the room Thursday night for the Los Alamos County Parks and Recreation Board meeting and even spilled out into the hallway. The turnout seemed to suggest recreation is a prized commodity by this community.

“We want to have recreational opportunities for everyone,” said a member of the public.

The hot topic was the proposed bike flow trail that would cover about 6 to 8 miles from the Bayo Canyon trailhead to the N.M. 502 Y and during public comment, speakers debated on whether it would impede on the number of recreational opportunities offered in the community.

Parks, Recreation and Open Space Division Manager Chris Wilson said all the comments would be recorded and used in the next steps for the proposed bike flow trail. He added that the board’s Open Space subcommittee will meet with Open Space Specialist Eric Peterson to address concerns regarding the bike flow trail’s impact on the mix of recreation uses in Bayo Canyon and the public comments that have been made. Wilson said the meeting would be scheduled soon and encouraged everyone to get in contact with Peterson about the project.

A bike flow trail, according to Peterson, is geared toward mountain bikers. A flow trail takes the bicyclist on a “terrain-induced roller coaster experience, with little pedaling and braking necessary,” as stated in Peterson’s presentation Thursday night.

“This style of trail typically contains features like banked turns, rolling terrain, various types of jumps, and consistent and predictable surfaces,” Peterson said in his presentation.

Peterson explained to the Los Alamos Daily Post that a group of community members presented the idea of a bike flow trail to the County Council last October and Council his division to look into the project. Peterson said Council was attracted to the idea of bike flow trail because it felt the trail fit into Council’s economic strategic goals.

He explained that several locations, including Walnut Canyon, were considered for the project but Bayo Canyon was ultimately selected because “Bayo seems to be the best fit for the characteristics and criteria of a bike flow trail.”

There are pros and cons to having the bike flow trail in Bayo Canyon, Peterson said. His presentation outlined the strengths and weaknesses of the project. For instance, a bike flow trail would provide better access with Bayo Canyon Road as well as make the upper and lower section more sustainable. Additionally, there would be pick-up and drop-off locations as well as networking with other routes and connections.

The cons include possible user-conflicts with equestrians and hikers. He noted the middle section presents terrain issues including a steep slope and large rock gardens. There also are impacts on cultural and endangered species and potential disruption to the Bayo Canyon Firing Range.

The project is by no means a done deal. Peterson reported that trail layout and flagging is complete but a cultural and endangered species evaluation is in progress. There are additional meetings that will be held to address questions on the trail. Plus, it still requires a recommendation to go before Council for approval. Since the project is still being developed and considered, a cost for the project is unknown, Peterson said.

He added the public’s feedback is being incorporated into the plan.

“We’re looking into some of the questions that have been brought up,” Peterson said.

A number of people provided their thoughts on the flow trail. June Wall, who has lived in Los Alamos for 47 years and is a member of the equestrian community, said that mountain biking’s popularity has “exploded.”

“As we watched the advent of mountain biking, our access to trails and our safety on the trails has diminished,” Wall said.

Amy Rogers agreed, saying, equestrians have “lost a lot of areas we used to ride in.” Rogers commented that “bicyclists and horses are not a good combination.” From her own experience, Rogers said many bikers are very polite on the trails. If they come up behind her while riding a horse, they announce their presence; however, there are some that do not and it can lead to a spooked horse.

She added the hope is that horse owners will be included in the discussion about the flow trail.

“We would really like to have a voice in this process,” Rogers said.

Brady Burke also offered doubts about the trail; wondering about spending money on a project that a limited number of people would use.

“There are a lot of costs … when a lot of the community is excluded from it,” he said.

Brad Nyenhuis, co-owner of Multi-Fusion Sport, also argued for the flow trail. He commented that the trail would eliminate user-conflicts.

“As for user conflicts, part of the deal with a trail like this is to eliminate this,” he said. “There are very few places that there will be crossing where there shouldn’t be.”

Nyenhuis also pointed out the flow trail could be an economic generator by drawing tourists to the County.

“The trail is designed to bring mountain bikers to Los Alamos,” he said.

Peterson encourages the public to continue to provide him with their input on the project. His email address is eric.peterson@lacnm.us