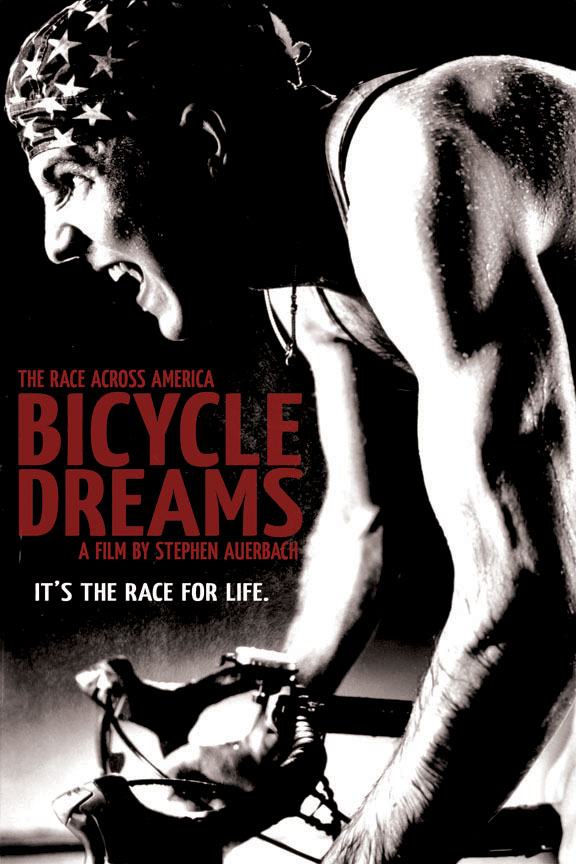 Bicycle Dreams, the award-winning feature-length documentary about the Race Across America (RAAM), will premiere in Albuquerque at the University of New Mexico’s Rodey Theatre at 7 p.m. Thursday, Jan. 24.

The screening is presented as a benefit by the Bicycle Coalition of New Mexico. Bike NM will host a second screening the following Thursday, Jan. 31 at The Screen in Santa Fe.

Guest speaker at the event will be Lisa Dougherty of Los Alamos, who will be competing in her first RAAM this summer.

The film, which has won numerous awards at film festivals all over the world, “is an up-close look at what RAAM riders go through,” says Stephen Auerbach, the director and producer of Bicycle Dreams. “They deal with searing desert heat, agonizing mountain climbs, and endless stretches of open road. And they do it all while battling extreme exhaustion and sleep deprivation. It’s a great subject for a film.”

“Bicycle Dreams is a spectacular and heartfelt film that offers a riveting portrait of extreme courage in the face of inhuman obstacles,” writes TheLoveOfMovies.com. “It is an artistic triumph that renewed my belief in the power of desire and the strength of the human will.”

“We are very excited to be able to bring Bicycle Dreams to so many locations along the route that have never had access to the film before,” says Auerbach. “Viewers will be overwhelmed by the amount of pain and suffering these riders go through.”

To capture the mammoth scope of the race, Auerbach worked around the clock with a complement of 18 cameras. Embedded camera operators traveled inside the racers’ support crew vehicles, gaining unprecedented access to the cyclists and their teams.

Their footage captured emotional and physical breakdowns, late-night strategy sessions, and great moments of personal triumph, all in intimate detail.

Auerbach then took on the enormous task of editing hundreds of hours of material and forming it into a powerful and inspiring look inside the most difficult race on the planet.

Most recently the film added the Best Foreign Film trophy from the Krasnogorski International Festival of Sports Films in Moscow and was also invited to be included in the 2011 World Cinema Showcase in New Zealand as well as the Mountain Film Festival in Istanbul, Turkey. And before that it made its Australian debut at the Big Pond Film Festival in Adelaide.

Critical acclaim for the film continues to pour in from all sources.

“An astonishing documentary,” declares Pez Cycling. “This film is a ride of many stark contrasts; when it ended I felt both shattered and triumphant. I realized I was experiencing its genius. A central theme of Bicycle Dreams is the profoundly inspiring strength of the human in facing monumental challenge and tragedy. Bicycle Dreams is a race of truth.”

“This film isn’t for those who want to shy away from the tragic side of the human experience, unwilling to risk the cracking of their shell of denial, not willing to risk their coping mechanism,” writes Cycling-Review.com. “Bicycle Dreams captures the human condition like few other films. Bicycle Dreams moves us to break through the barrier of the fear of death. I have seldom found a film that captures this ‘life drama’ as powerfully as does Bicycle Dreams.”

Adds Podium Café, “Bicycle Dreams is the ultimate inner journey. If you thought the life of a cyclist was an internal struggle, wait until you see what Auerbach unearths in this film. Bicycle Dreams is an unprecedented exploration of the subject of the suffering on the bike.”

About.com writes, “As we fall deeper and deeper into Bicycle Dreams, what we witness grows more terrifying, yet more compelling. Auerbach’s masterful direction exposes the raw lessons that drive people to push beyond the limits of human endurance. Revealing what lies at the heart of every impossible human endeavor is what Bicycle Dreams is all about.”

And finally, Bicycle Touring Pro comments, “If you’ve ever dreamed of challenging yourself to a place far beyond what you previously thought was possible, Bicycle Dreams is a film you must see. It’s beautiful, thought provoking, exciting, emotional and scary. The experience of watching this film will leave you with a new perspective on life that will remain with you for a very long time to come.”

Bicycle Dreams also has been named one of the top 10 adventure films of all time by both The Matador Network and Playground Magazine, calling it the best bicycle film since “Breaking Away.”

Tickets will be $10 in advance and $15 at the door the night of the show. To purchase advance tickets, order online at www.unmtickets.com. The Rodey Theatre is located at 230 Cornell Drive NE on the UNM campus.

The mission of the Bicycle Coalition of New Mexico is simple and succinct: to increase the number of bicyclists in New Mexico by promoting cycling, providing education and advocating for the rights of cyclists throughout the state. For more information, visit www.bikenm.org.

Following a stint as an ultradistance runner – completing the Leadville 100 three times – she returned to cycling and this past November finished second in the women’s division at the World 24-Hour Time Trial Championships in California behind six-time RAAM winner Seana Hogan.

Dougherty completed 416 miles at the event and qualified for RAAM 2013. She is racing as Team Los Alamos Schools to raise funds for the PTO’s of the Los Alamos school district. To get a finish at RAAM, she must cover 3,000 miles in less than 12 days. For more information about RAAM, go to www.raceacrossamerica.org.

For more information on the film, go to www.bicycledreamsmovie.com or visit us on Facebook.