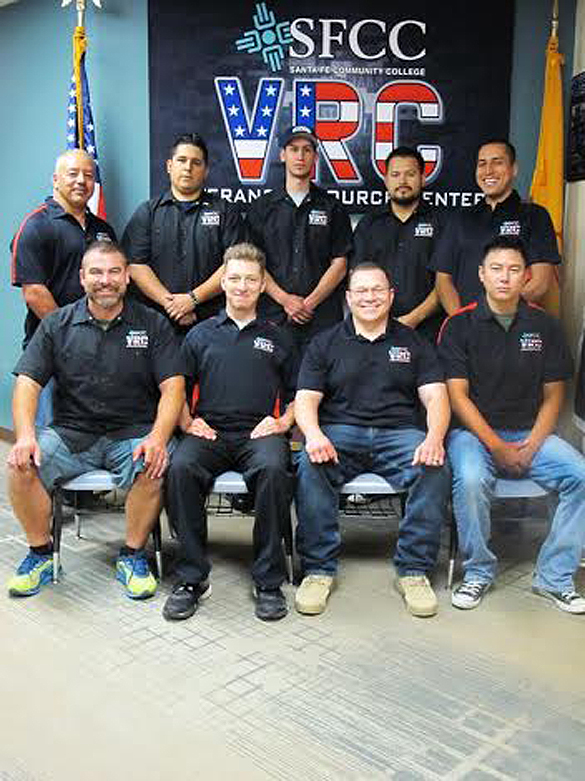 New Mexico’s Santa Fe Community College tops the Best for Vets: Career & Technical Colleges 2016 rankings for the second straight year. Courtesy/SFCC
SFCC News:
When Mike Baker left the Marine Corps in 2008, he was hoping to leverage his military training as a bulk fuel specialist into a civilian career in the same field. He applied immediately for higher-level civilian fuels jobs, without going to school for a civilian degree or certificate.
Companies weren’t interested.
“I had the training, but nobody would hire me because I didn’t have the piece of paper,” the former sergeant said ― who ended up working at Target.
Such situations can be common for veterans who receive specialized and sometimes high-level technical training in the military — but not the degree or certification that civilian employers want to see in order to establish that a job applicant is qualified.
Career and technical schools can help bridge the gap, updating a vet’s skills and putting that piece of paper in hand, without demanding a four-year enrollment.
Matt Thewes, director of veterans services at Fayetteville Technical Community College in North Carolina, where Baker is a student, said his school developed Transition Tech to help vets with strong military training under their belts get the credentials and certificates that civilian employers want.
The classes last a matter of weeks, not years. And they’re completely free for vets, paid for by a North Carolina state agency. 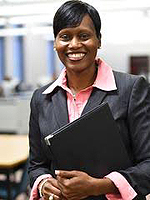 Army Chief Warrant Officer 3 La Tika Gray is a student at Fayetteville Technical Community College. Courtesy/Fayetteville Technical Community College
“We’re working on trying to help them get employment and get career-worthy jobs. Not just a job for now, but a job for forever,” Thewes said.
Fayetteville Tech took the second spot in our Best for Vets: Career & Technical Colleges 2016 rankings.
For the second consecutive year, New Mexico’s Santa Fe Community College topped the list, with Columbus State Community College in Ohio, Savannah Technical College in Georgia and St. Cloud Technical & Community College in Minnesota rounding out the top five.
While our detailed, Best for Vets survey of more than 100 questions once again was our primary basis for evaluating schools, we also were able to rely on more public information than ever before as part of the process.
In addition to Education Department data across a wide variety of school measures that we’ve factored into these rankings for years, a wealth of new information has been made available by the Education, Veterans Affairs and Defense departments.
For career and technical schools, a key question is how their students fare in the job market after enrolling.
Just under 83 percent of students who enrolled in the career and technical schools that responded to our survey were employed after six years after starting school, earning an average of about $27,645 per year.
The mean graduation rate for responding schools was a little under 40 percent, a figure that looks low but is actually higher than the 29 percent charted nationwide for 2-year schools.
The federal government does very little to track how well military and veteran students do. In fact, the Education Department calculates graduation rates in a way that leaves out most current and former service members.
So for the last several years, Military Times has directly asked schools for such academic outcome information.
Each year, the number of schools tracking how well their military and vet students do as a group has increased, and this year is no exception. But it’s still less than half of institutions, about 44 percent.

Ten-year Army veteran Daniel Macarthur Dotson graduated from Savannah Technical College in business administrative technology. Photo by Stephen B. Morton for Savannah Technical College
Military and veteran students account for a little less than one in 10 students at responding schools.
The armed forces are well represented in the ranks of school administrations, with better than two-thirds of responding schools telling us they have a current or former service member, or a military spouse, in such positions.
And schools have overwhelmingly signed on to various federal initiatives related to military and veteran education.
More than 90 percent reported agreeing to the Principles of Excellence for military and veteran education, and an overwhelming 97 percent of schools told us they’ve signed on to the Defense Department’s latest education-related Memorandum of Understanding.
About 56 percent of responding schools indicated that they have a veterans office. About 80 percent told us they have at least one staff member who spends most of their time on military or veterans issues.
Students with the most common military and veteran education benefits will not have to pay anything out of pocket to attend most of the schools responding to this survey — especially public institutions.
Some 93 percent of public schools waive out-of-state-tuition for veterans, meaning that all tuition and fees will be covered for 100-percent-eligible Post-9/11 GI Bill students. Slightly more than 30 percent of private schools have tuition costs below the Post-9/11 GI Bill cap.
When you factor in the Yellow Ribbon program, in which schools can choose to participate to make up the difference between school costs and what the GI Bill covers, students at nearly 80 percent of the schools that responded to our survey can expect to pay nothing out of pocket.

Virginia College criminal justice student Cassandra Jackson, a 10-year Army veteran, identifies with local police departments’ “protect and serve” motto. Courtesy/Virginia College
Just under six in 10 schools told us that their program costs were below the $250-per-credit-hour limit set for military tuition assistance for active-duty service members.
If you pick your school carefully, the money you have to invest in education can be minimal and very worthwhile.
With an aging technical workforce, employers in the eastern Georgia region are very interested in hiring veterans, Jeff Ashmen, military outreach coordinator for Savannah Technical College said.
But while veterans have the leadership qualities and other attributes employers covet, they often need their technical skills “retooled” for the civilian workforce, Ashmen said.
“Savannah Tech offers programs that can help area vets get the skills and certifications employers are looking for quickly,” he said. “And once you graduate, the school helps you follow through as well.”
“Our college has a 96 percent job placement rate, so we really have our fingers on the pulse of what employers are looking for in a trained workforce,” Ashmen said.
After failing to snag the fuels jobs he wanted and getting a job at Target, Baker subsequently worked at a Goodyear plant for a few years before deciding to go back to school last year.
Had Fayetteville Technical Community College offered a quick-credential program in fuels in 2008, “I would have been the first one to sign up,” he said. But with his technical experience from the military years old at this point, he decided to go in a different direction.
Baker, now president of the school’s student vet group, is studying sales and marketing.

Military students graduating from Savannah Technical College in Georgia wear red, white and blue honor cords at graduation. Photo by Stephen B. Morton for Savannah Technical College
“I picked Fayetteville Tech mainly because I knew it was going to be a strong veteran community,” he said.
That community isn’t limited to the campus. Thewes said people and organizations around the Fayetteville area generously donate time and money to his vet center, helping the school provide benefits and support to its military and veteran students that exceed what would be possible on just the community college’s budget.
Schools also can be advocates for the vet community beyond the campus.
Santa Fe Community College has worked with the mayor and city officials to get all veterans a substantial discount on membership to city exercise facilities and to give disabled veterans free access to them, according to Gregory Scargall, the Veterans Resource Center specialist.
“We are the community college. We represent this community,” he said.
Scargall added that he views the veterans center as, in part, a “safe harbor” where veterans who may be having trouble adjusting to civilian life and feel isolated on campus can connect with other vets who understand what they’re going through.
It did just that for Santa Fe student Oscar Markman-Lopez. He’s been in and out of school since 2010, due mainly to difficulty adjusting to the big differences between the Marine Corps, where he was a corporal working with artillery, and the college campus.
Markman-Lopez said he had post-traumatic stress and found it difficult to socialize with nonveterans. But since enrolling at Santa Fe in January, he has gotten more involved with the vet center, and it’s made a big difference.
“We all have something in common,” he said. “We’re helping  each other. This is a great place. It’s changing my life.”
Menu
Los Alamos
27°
Fair
7:01am4:51pm MST
Feels like: 21°F
Wind: 5mph SSW
Humidity: 60%
Pressure: 30.25"Hg
UV index: 1
TueWedThu
46/30°F
46/32°F
50/36°F
Weather forecast Los Alamos, New Mexico ▸