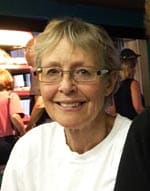 Tuesday morning, a monumental American flag soared from the high-angle rescue ladder above the row of fire engines and emergency vehicles parked ceremonially at the West Jemez Road Fire Station. Tuesday was 9-11, something Americans alive in 2001 were tasked to Never Forget.

As I watched people heading into LANL, however, it seemed as if … well … a lot of us have, indeed, forgotten. Drivers were concentrating on mundane things like the phone at their ear, or the car ahead rather than the flag above. Even pedestrians crossing with coffee from Hot Rocks focused on their devices rather than on what that flag—flown by firefighters in homage to their fellows—represents.

What we have forgotten is the profound heart-truth that 9-11-2001 exemplifies.

On 9-11, 2001, 19 young men changed world history by hijacking four planes and flying three into buildings and one into the ground. One could argue that their attack and America’s reaction to it started WWIII, or, at minimum, the worldwide war against whatever new stateless enemies commit atrocities or against whichever whomever—from other religions to refugees—is declared enemy de jour. The real meaning is not, as one could argue, that on this date 17 years ago, those 19 young hijackers blew open America’s dark side to justify revenge by acting out bigotry, intolerance and paranoia toward The Other.

The essence of 9-11 is not a monument to murder and hate. It is proof of what people do on behalf of Love. The heart-truth taught us by the people whom we’re honoring on 9-11 is that, in the end, the only thing that matters is Love.

In this moment when political parties wage their own jihads—at this moment when we’re told not to trust any government, to replace civility with sneering sarcasm, to idealize using wealth for personal aggrandizement rather than for a social good, when the world is at war with whoever looks or speaks or believes differently—9-11 reminds us of the moment people in a city and on a plane organized to die in the attempt to rescue strangers.

All those first responders to the World Trade Center, the 71 law enforcement and 343 firefighters, (including a chaplain) who came in from wherever they were, donned their gear, and climbed toward the top of the Towers to rescue however many of the 14,154 people were, at that moment, still alive to evacuate? These 414 who died with 2,214 civilians in the collapse? They weren’t doing it for Wall Street or corporate profits or a political party or a particular race.

They climbed those stairs for each of the bodies trapped on those floors without regard for gender, race, social status, nationality, or net worth. None of those 412 emergency workers really had to start climbing the 2,226 steps to die for others. They did, though.

And what do you think were the last words of the people in the Twin Towers, on Flight 93? “Honey, hurry, sell Facebook and buy Amazon!”? When each of them called home, do you think they talked about putting up a border wall or tearing down a Confederate statue?  We know it wasn’t. We have thousands of voice mails to prove it wasn’t. The last words were, “I Love you.”

And I ask you: In their final moments in the Towers, do you think those trapped there asked about the political party or nationality or religion of all those who would share their fate in the explosion of hate? We know it was not. Instead, they reached out to one another. “Take my hand. We have to do this together.”

On Flight 93, do you think they yelled, “We’re bringing down this plane and sacrificing our own lives to save my 401K!”? We know it was not. They died to save the unknown strangers at the target.

In every language of all the people in the Towers, the Pentagon, and on Flight 93, the last words were, “I Love you.”

On this one day we could emulate what those who died at 9-11 experienced in the depths of their souls. In the end, the only thing remaining is Love. Even in the flames of hatred, the last thoughts are of Love.

Nowadays it takes great courage to even meet The Other with civility, let alone sacrifice our lives. But why not use the lesson of 9-11—not to justify our worse behavior in the name of good versus evil—but to be kind.To value life. All life. Everybody-life. The answer to the queston “What is the soul-lesson of 9-11?” is simply, “Don’t wait until the end of our lives to realize that caring for one another, no matter who the other is, is what is most important.” We end with cries for Love. Why not start with simple acts of Love?

We can replace suspicion with civility. Meet The Other with kindness. I say of course we can. I say we already do. Every single day individuals contribute their own heart-instinct of heroism. And as wisdom tells us: If you are faithful in the small things, you will be faithful in large ones.

This is what we remember on 9-11. This can be us. We can reject the instinct for hatred and act on the power of caring for one another as we meet The Other with the outstretched hand of knowing we’re in this together. This is what that soaring flag represents. This, the heroism of Love, is what truly Makes America Great.