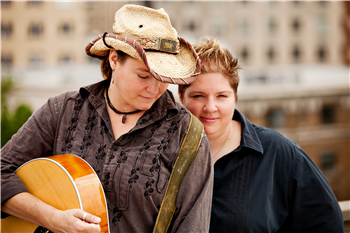 In addition to live music, there will be a Halloween Costume Contest and other festive activities, all to raise funds to help First Lt. Micah Jay Andersen who was seriously injured in Afghanistan June 1. The American Legion is a private club. To attend, you must be a member or a bona fide guest of a member. If interested in joining, see the bartender for details, or call 505-662-7772 for more information. This is a 21 and over event.

Andersen was deployed to Afghanistan in 2012 and shortly after, the couple found out Linzi was pregnant. Linzi gave birth to their son Jay in April of 2013, and although Andersen was not able to be home for the birth, he was able to attend via Skype.

On June 1, in Kandahar, Afghanistan, Lt. Andersen’s Unit was hit by an improvised explosive device (IED), killing one soldier instantly and severely wounding Andersen. He suffered extensive damage to his pelvis and had to have both legs amputated. He is currently undergoing extensive surgeries and rehab at San Antonio Military Medical Center in Fort Sam Houston, Texas. His wife and son are with him every day during his recovery, which is expected to last for at least two years. Funds raised from this event will help Andersen and his family with their ongoing and rising medical expenses.

Mama’s Black Sheep is the musical collaboration of singer-songwriters Ashland Miller (guitar/vocals) and Laura Cerulli (drums/vocals). They have toured together since 2008 and are both veterans of the singer-songwriter circuit. Mama’s Black Sheep is a nationally touring duo playing nearly 200 shows a year throughout the U.S. and Caribbean. This show is a part of their Southwest tour, which includes stops in New Mexico, Arizona and Nevada. They are currently on tour in support of their sophomore recording Drivin’ On.

Drivin’ On features nine original songs and two covers, recorded at some of the duo’s favorite venues and festivals. Drivin’ On, typical of Mama’s Black Sheep, is a blend of blues, country and acoustic rock.

Before Mama’s Black Sheep, Miller toured for 12 years as part of the award-winning acoustic duo CommonbonD, releasing six CD’s, performing on The Nashville Network (TNN), and showcasing their music in more than 40 states as well as overseas. Miller’s songwriting, harmonies, and creative musical arrangements have been shared on stage with talent such as John Mayer, Ritchie Havens, Catie Curtis, and Sophie B. Hawkins.

Cerulli previously fronted her own band, Cerulean Groove. From 2005-2009, she toured nationally and internationally as a member of SONiA & disappear fear. Her distinctive style has been appreciated everywhere from The Kerrville Folk Festival (Texas), to The Barns at Wolftrap (Va.), to the High Sierra Music Festival (Calif.), to The Red Roof Women’s Festival (Ontario), and even ‘down under’ at Woodford Folk Festival (Australia.)

Together as Mama’s Black Sheep, Miller and Cerulli create a unique tapestry of songs, weaving vibrant color and rich texture to create a dynamic conversation between guitar and percussion. Bob Steel of Baltimore Out Loud writes “Cerulli opens her mouth and the world stands still as she wrings every drop of emotion out of the lyrics with her powerful, soaring voice, forged in the fire of the blues and tempered in the cool technique of her classical training.“