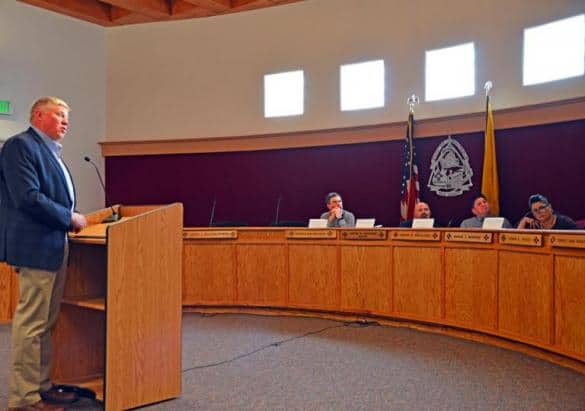 LANL Deputy Director of Operations Kelly Beierschmitt shares infrastructure plans with the RCLC Board Friday in Española. Photo by Carol A. Clark/ladailypost.com 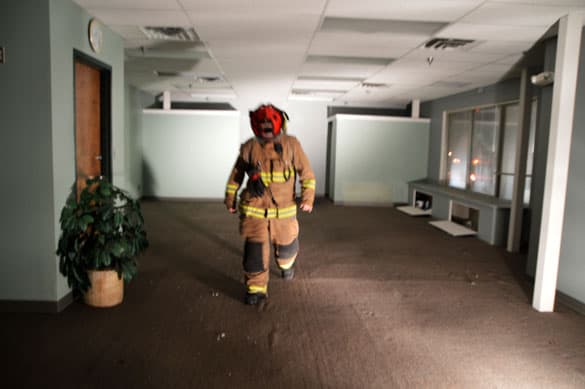 Española – It’s no secret Los Alamos National Laboratory has growing pains. Increased budgets and increased staff are a plus, but the extra projects and people have stretched the infrastructure resources at LANL … and the future goals of the Lab will stretch them even more.

LANL Deputy Director of Operations Kelly Beierschmitt addressed these issues during a presentation to the Regional Coalition of LANL Communities Board Friday in City Council Chambers in Española. Beierschmitt is responsible for the Lab’s operations and facilities services, maintenance and infrastructure planning.

“Communication is really rough at the site,” Beierschmitt said. “Fixing that is a priority.”

A secondary fiber line to be used as a backup for Internet communications is planned, as well as three new cell phone towers.

Housing is another pressing need. The Lab plans to continue hiring at the rate of 1,000 plus new employees for the next five years, Beierschmitt said. Subcontractors are another big piece of LANL’s plans, increasing the need even more.

“Our needs are vast,” Beierschmitt said. “Los Alamos County has been very supportive of our housing needs and has a number of projects in the works, but we’re 11,000 houses short today.”

LANL is talking to all of the surrounding communities about meeting its housing needs.

“Our staff needs good places to live,” Beierschmitt said. “The vast majority of our staff grew up here and they want to stay in their communities.”

For some people, the place they want to live is Albuquerque. The Lab is looking at ways to address transportation issues facing commuters, he said.

LANL and Los Alamos County have plans to build a second bridge, in addition to the Omega Bridge across Los Alamos Canyon. Eventually, the aging Omega Bridge would be shut down. The Lab also is looking at various options for bypass roads around the Lab.

LANL will build two new parking structures to house the additional vehicles of its new employees, Beierschmitt said. Plans are underway to demolish the dilapidated warehouse site and possibly move shipping and receiving offsite to somewhere in the Española Valley to make room for proposed buildings.

The Lab wants to make sure that its hiring needs are met by as many qualified New Mexicans as possible.

“Getting the word out on the STEM (Science, Technology, Engineering and Math) education pipeline is vitally important,” Beierschmitt aid.

He explained that education opportunities for technicians is a topic close to his heart. He started his career as a technician, eventually earning his Ph.D. in Industrial Engineering from Texas Tech.

“Every student needs to understand that being a technician can be a gateway to any STEM career,” he said, adding that new research projects will mean more opportunities for all kinds of employees with many credentials from AA degrees to Ph.Ds.

A new free electron laser is coming to LANL and that’s “one of the super big things in science anywhere in the world,” Beierschmitt said. “LANL is the nation’s center for reactive materials expertise.”

Also presenting at Friday’s meeting was DOE-Environmental Management Manager Doug Hintze of the Los Alamos Field Office. He gave a review of FY 2019 accomplishments for the legacy cleanup mission at LANL and a preview of FY 2020 legacy cleanup priorities. He said the Office would like to see the number of shipments to the WIP facility reach 100 this year. Shipments were shut down for several years due to an accident involving LANL waste.

Hintze said N3B, LANL’s clean up contractor, and DOE-EM have started apprenticeship programs, which are helping to fill the needs of the cleanup program.

“If you need the resources, go out and get them,” Hintze said. “We need boots on the ground, not Ph.Ds.”

In wrapping up the meeting Friday, RCLC Executive Director Eric Vasquez announced that the state auditor had notified his office that after having completed six years of audits (2013-2018) over the last year, the RCLC is now current.