Bears Are Back In Town! 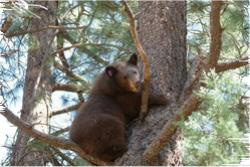 It is one of the most wonderful times of the year! The bears are back in town!

After their long rest, bears have begun to wander out of their dens, and we have been blessed with seeing a couple of bears in Los Alamos already.

Bears always come with some fear. Fear of the predator in your back yard, and Land of Enchantment Wildlife Foundation would like to give everyone some facts before they get too scared.

Bears are the embodiment of power! They are big, strong, and fast. Given enough time, a bear can break into almost any contraption. With this, people often fear bears in all forms, but most of the time, bears are skittish animals. Unless they or their cub are threatened, most bears will seek the quickest escape route from the situation.

Should you encounter a bear in the wild that does not automatically run away, just remember to act BIG and LOUD! If you can appear bigger than the bear, the bear will flee. Now, bears are known for doing a bluff charge and snapping their jaw. If this happens, just continue to be BIG and LOUD.

Now, that will work for most bears, but not all. Should you come across a cub in the wild your best option is stop and slowly walk backwards away from the cub. Momma bears will only attack if their cub is threatened. Should you be attacked, play dead, and wait for the mom and cub to leave the area before getting to help.

NEVER approach a cub, even if you think it has been abandoned or orphaned by its mother. Your best bet is to contact New Mexico Game and Fish and report the bear. Separating the cub from its mom not only has a huge impact on the development of the cub, but also will cost a wildlife rehabber around $6,000 to $8,000 to get the cub to healthy weight to release, with only a 50 percent chance that bear will survive. In the end, it is always safer for you and the cub to leave it alone.

Now, you might have noticed that the bears in town seem to be a little skinny.

This is perfectly natural! While hibernating, bears enter a physiological state where their body temperature drops to near ambient (environmental) temperature, and their heart rate and respiration rates slow drastically. While in this state, bears recycle their proteins and urine, allowing them to stop urinating for months. Shockingly, in this state, bears do not develop muscle atrophy. Finally, during hibernation, bears can lose 25-40 percent of their body weight. This fat is often burned for energy during their winter rest.

Once out of the den, bears automatically begin their journey to recover the weight they lost during hibernation and to regain a little extra for next winter.

We have been blessed with a few years of extra water during our summer and winter months. This has allowed nuts and berries to grow in abundance in our mountains. This has also lead to a decrease in a number of bears needing to be rehabbed for emaciation.

However, there is still nothing better than the food that humans leave out. This includes birdseed, hummingbird nectar, dog and cat food, and our own trash. Bears have an incredible sense of smell, and are strong enough to break into most containers. In this case, the best solution is to limit the amount of food that is left outside, especially in your trash. Although there is a good chance the bear will still be able to smell the trash, it is unlikely the bear will break into your home to get to the food. So keeping your trash and your pets food inside will help to keepthe bears out of your yard.

NEVER EVER feed a bear! Although they look skinny, most bears will be able to find the food they need to get fat and ready for winter. By feeding the bear, you are putting yourself and the bear at risk. Bears are lazy by nature, and will want to spend as few calories as possible to find food. Should they find that you are leaving food for them, they will stop foraging for other sources of food. In the end, the bear could get into trouble, and if it is deemed a “problem bear” enough times, Game and Fish will have no choice but to kill the bear. In addition, bears are vastly protective of their food. Should you leave food for them, and you or someone you know gets to close, the bear will attack to get what it wants – FOOD.

Again it is not worth the risk!

In the end, bears should be enjoyed, not feared. They are incredibly powerful animals, but can be soft and gentle. Watching a mother and her cub brings warmth to the heart, and seeing a bear play in water makes you remember when you would run through the sprinkler as a kid. Yes, they are dangerous when provoked, so the best option is to sit back, get out of their way, and watch nature at its best.

Direct questions or concerns about bears to the Land of Enchantment Wildlife Foundation, Pajarito Environmental Education Center or New Mexico Game and Fish.

For a great documentary on bears, find Disney Nature’s – BEARS. It is a wonderful tale of a mother grizzly and her cubs in Alaska.