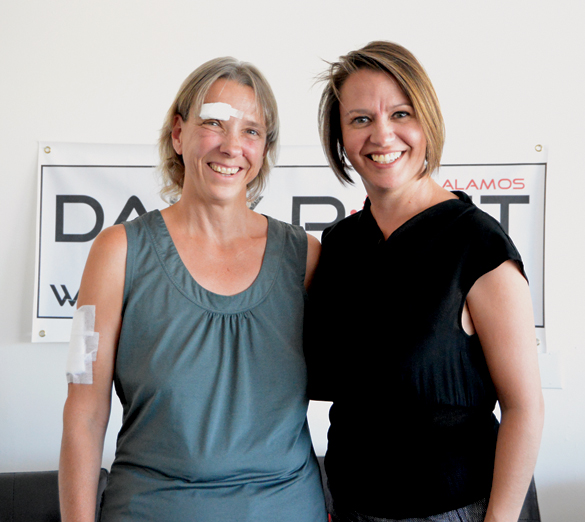 Ultrarunner Karen Williams with Rep. Stephanie Garcia Richard stopped by the Los Alamos Daily Post Monday to talk about their mission to protect bears. Photo by Carol A. Clark/ladailypost.com 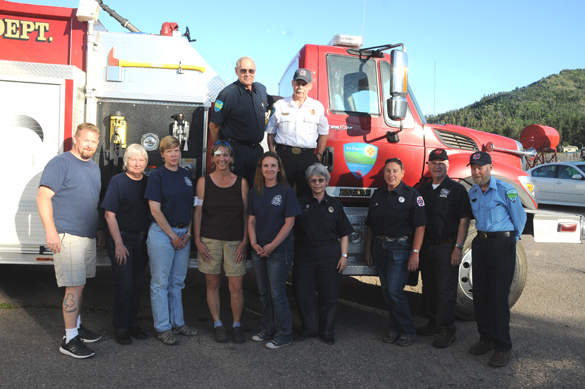 Karen Williams with Rep. Stephanie Garcia Richard last Thursday during their visit to the La Cueva Fire Department to thank them for rescuing Williams after she was attacked by a bear June 18 while running a marathon in the Valles Caldera. Photo by Robert Borden/Jemez Thunder

Williams, 53, is an ultrarunner who was attacked by a black bear June 18 while competing in the annual Valles Caldera Runs. She ran up over a hill and came between a mother bear and her cubs.

Going into protective mode, the mother bear mauled her, scratched her face and arms and bit her neck. As required by current law, New Mexico Game & Fish tracked down the bear and killed her to test for rabies, Williams said. She and Rep. Garcia Richard are now on a mission to revise that law.

“The bear was just protecting her cubs and did not deserve to be killed … evidence shows it is so rare for a black bear to ever have rabies …,” she said, “this is why I am presenting in front of a legislative committee (today) in Alamogordo.”

Garcia Richard worked with Williams on her presentation but can’t attend with Williams because she is hosting the Legislative Education Study Committee in Los Alamos this week.

State law dictates that whenever wildlife attack a human they are killed and tested for rabies, however, Williams and Garcia Richard are bringing forward a new idea.

They want to see the formation of a Rapid Response Team already in operation in states like Montana in which an expert from Game & Fish and an expert from the Department of Health are dispatched wherever an attack occurs. The Game & Fish expert determines whether the attack was protective or predatory and the DOH expert determines whether the species is prone to rabies.

“This is so proactive and not reactive,” Garcia Richard said. “We really need a proactive response because the more we encroach on their habitat – the more we are going to interact with wildlife.”

Garcia Richard said she really applauds Williams for her efforts.

“To be the victim of a bear attack and then advocate for them is the voice of someone we should be listening to,” she said.

Williams did everything right during her ordeal. She did not get back up when the bear knocked her to the ground, she pulled her arms and legs in close to her body and played dead. Her arms were severely mauled and wouldn’t work she said so she waved her leg to get the attention of the other runners passing by on the trail.

She attributes her ability to keep her presence of mind and remain calm under that kind of pressure to her years in the U.S. Army in military intelligence between 1983 and 1988 as well as being a critical care nurse.

Five days after her attack Williams was back out on the trail hiking two miles and a day after that she hiked three miles in Rendija Canyon.

“The 50K I had trained for took me almost 11 hours, so two or three miles is nothing,” Williams said. “I did a 6-miler last Thursday and brought along bear spray and a dog.”

Williams moved to Los Alamos four years ago. She ran her first marathon when she was 50 and has completed a 50K and 55K since then. Her husband Mike Engelhardt also is an ultrarunner. He reached the finish line in this year’s Valles Caldera Runs and waited for his wife for more than an hour not knowing she had been attacked by a bear.

Williams is a nurse at Los Alamos Medical Center and said she will return to work this Friday. She said she would like to tell the community: “Don’t be afraid of bears – you are more likely to be struck by lightning by 250 percent than ever be attacked by a bear.”