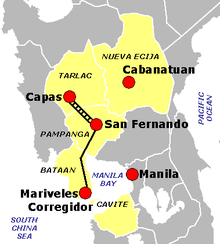 U.S. SENATE News:
ALBUQUERQUE—In partnership with the office of Sen. Tom Udall and The Oasis Veterans History Project in New Mexico, New Mexico PBS has been asked to submit the unedited footage of interviews conducted for the television program BATAAN: A 70TH ANNIVERSARY COMMEMORATION, for inclusion into the permanent collection at the Library of Congress.
As a companion to the documentary TRAGEDY OF BATAAN, New Mexico PBS produced the program BATAAN: A 70TH ANNIVERSARY COMMEMORATION, with survivors of the surrender of Bataan.
New Mexico PBS recorded 1 1/2 hours of interviews with Pedro “Pete” Gonzalez, a survivor of the Bataan Death March and Bill Overmier, survivor of both the battles of Bataan and Corregidor. Edward D. Baca, Lieutenant General, USA (Retired), former head of the New Mexico National Guard and the National Guard Bureau in the Pentagon and long time spokesman for the Survivors of Bataan, also participated in the interviews.
“The people of the United States are forever indebted to the service and sacrifice of those who suffered at Bataan,” Udall said. “The events at Bataan have great historical significance, but the number of survivors who can share what happened there is rapidly dwindling. The addition of these interviews into the Library of Congress will help to ensure that their heroic stories are not forgotten.” 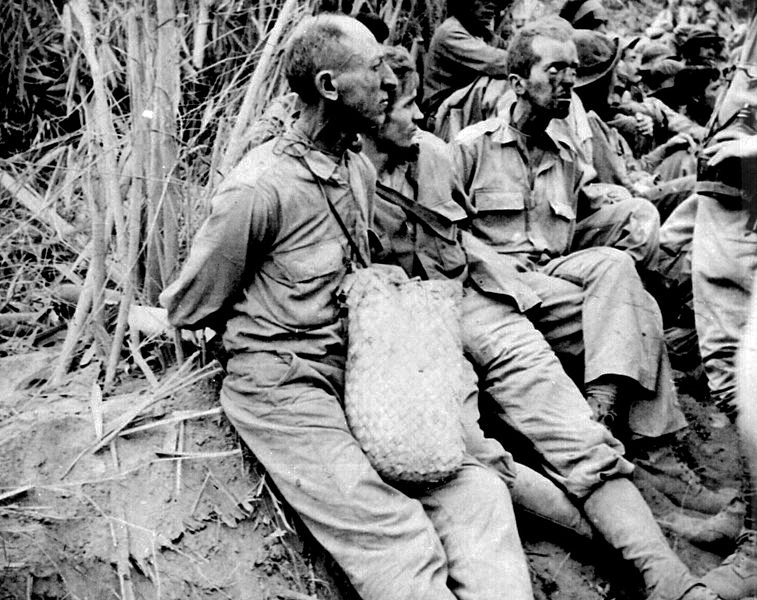 Prisoners on the march from Bataan to the prison camp, May 1942. Courtesy/National Archives
“New Mexico PBS is proud to partner with Senator Udall and The Oasis Veterans History Project, and are honored that the Library of Congress has chosen to add these interviews into its collection,” said Polly Anderson, CEO and General Manager, New Mexico PBS. “The first-hand accounts and stories of these survivors of Bataan are living history, something which New Mexico PBS was honored to preserve for future generations. Now these stories can be shared not just with New Mexicans, but with the nation and the world.”
BATAAN: A 70TH ANNIVERSARY COMMEMORATION was distributed to PBS stations across the country to be aired around Memorial Day 2012. So far, the program has aired 115 times on 73 PBS stations.
The Oasis Veterans History Project had to receive special permission to include the BATAAN: A 70TH ANNIVERSARY COMMEMORATION interviews, as they included more than one veteran; however, due to the special subject matter, the Library of Congress granted a waiver to include this very special discussion.
The U.S. Congress created the Veterans History Project (VHP) in 2000, as part of the American Folklife Center at the Library of Congress.
The VHP honors our nation’s war veterans by preserving, archiving and sharing their oral history stories for generations to come.
Priority is given to World War II veterans, but accounts are collected from veterans of the Korean War, Vietnam War, Persian Gulf War, the Afghanistan/Iraq conflicts as well as non-combat veterans. All oral testimonies must be first person – from the veteran themselves – and the veterans must have served in the US Armed Forces.
Albuquerque OASIS is the local partner for the VHP. Some 24 volunteers are drawn from the local community of senior adults with participation of many who are veterans themselves or family members of veterans.
These volunteers assist the veteran in telling their stories and process all of the recordings and paperwork to be sent to the Library of Congress.
To date, Oasis Albuquerque has interviewed 498 veterans. With the addition of these two testimonies, the number will reach an even 500.
A digital copy of the oral interview is sent to the veteran, the Library of Congress, and the New Mexico Veterans Memorial in Albuquerque. Michael Nutkiewicz, Ph.D., Executive Director for Oasis Albuquerque oversees the VHP in New Mexico.
As a member of the House of Representatives, Udall first introduced legislation to honor Bataan veterans with a Congressional Gold Medal in 2008. It is the nation’s highest and most distinguished civilian award.
About New Mexico PBS
Celebrating over 50 years of service, New Mexico PBS serving northern and central New Mexico, broadcasts a wide array of national nature, history, current affairs, health, performance, children’s, educational and entertainment programs. New Mexico PBS produces the weekly public affairs series NEW MEXICO IN FOCUS, the monthly programs PUBLIC SQUARE and CONNECT, and a variety of specials highlighting issues and topics of concern and interest to New Mexicans. New Mexico PBS operates 4 digital broadcast channels: NMPBS 5.1 (core PBS and New Mexico PBS programs), NMPBS 5.2 (Vme: 24 hour Spanish-language PBS programs), NMPBS 9.1 (alternate PBS programs and World) and NMPBS 9.2 (Create Channel – Travel, Cooking & How-To’s). New Mexico PBS is co-licensed to the University of New Mexico (UNM) and Albuquerque Public Schools (APS.)
Menu
LOS ALAMOS