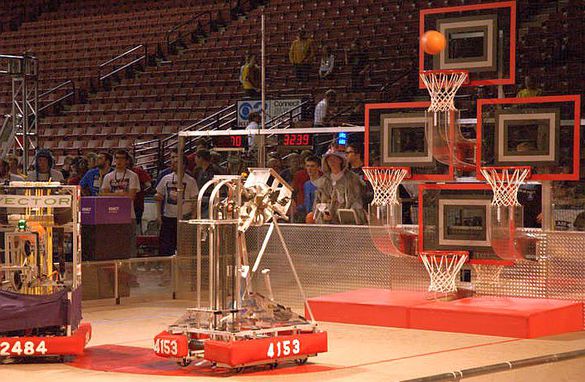 A robot makes a basket. Photo by Laura Fraser

Team 4153 from Los Alamos High School recently traveled to the regional portion for the FIRST Robotics Competition in Salt Lake.

The Team, named Project Y after the government name for Los Alamos during the Manhattan Project, came home with high honors. 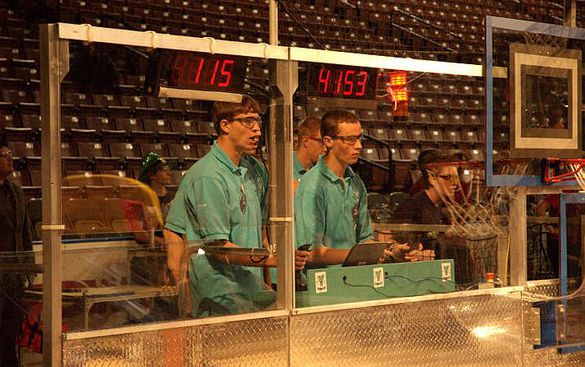 The team and their hoop shooting robot made it through the quarter finals and on to the semi finals, where they weren’t eliminated until the final round.

They finished 14thout of 44, an amazing showing for a brand new team.

The team and their robot garnered a number of prestigious awards at the competition as well. 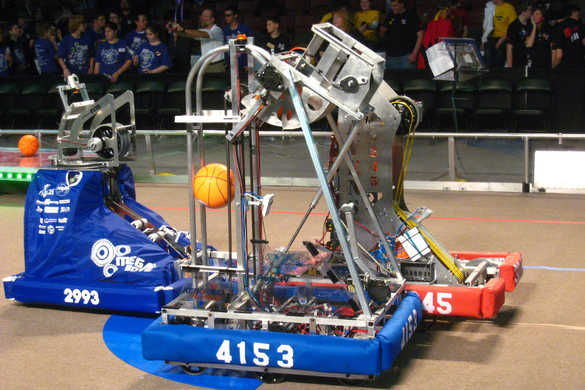 The 15 students and 10 adult mentors of Project Y were required to design, build and program a robot from scratch in only six weeks.

The team began work Jan. 7 and wrapped up the project Feb 21.

The students worked in the shop and laboratory facilities at UNM-Los Alamos. 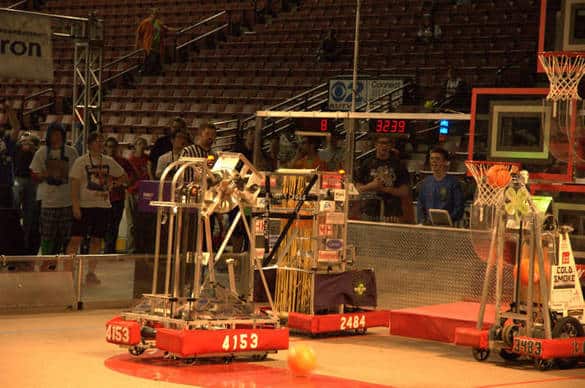 The FIRST Robotics Competition involves short games played by robots. The students build and program their robots, which are remotely controlled during the competition.

Each team receives a kit of parts made up of motors, batteries, a control system, a PC and a mix of automation components – but no instructions. Designing and programming the robot is up to the students.

This year’s competition is Rebound Rumble.

The object is to manipulate the robot to score as many baskets as possible during a two-minute and 15 second match.

The competition also includes a balancing component in which the robots are required to balance on a bridge. 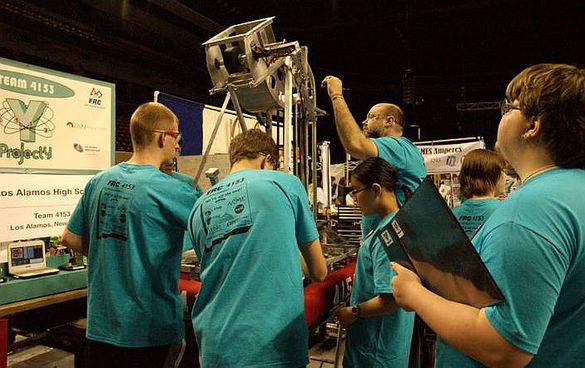 “People, and also the judges, were so impressed with our robot and our general functioning as a team that we were awarded the “Rookie Inspirational Team” trophy,” Don Davis said.

Davis teaches robotics at UNM-Los Alamos and at Los Alamos High School and is one of the team’s mentors.

“Many people came to our pit area and commented on how well-engineered and well-built our robot was, and when they found out we were a rookie team, they’d just shake their heads and say things like ’that is unbelievable,’” Davis said. “Our ‘pit’ area was so well organized and so neat, that we received the ‘Number 1 for Pit Safety Award’ as well.”

Project Y also earned “Top-seeded Rookie Team” trophy by having gone further than any rookie team in the competitions. 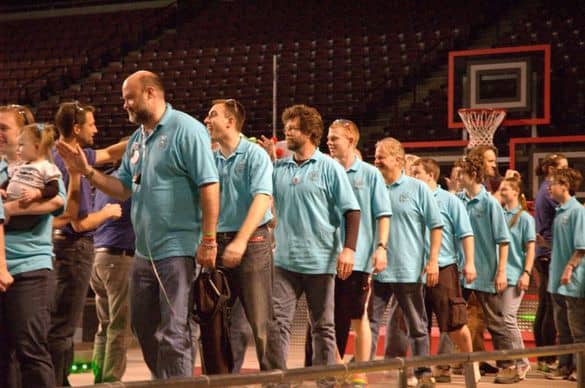 Steve and Tiffany Anton founded the team. Tiffany started with robotics in high school and the couple was involved in a FIRST competition associated with Virginia Tech before moving to Los Alamos.

Steve is a post-doctoral fellow in mechanical engineering at Los Alamos National Laboratory.

“The experience is captivating,” Steve said. “Kids won’t get this real-world experience in a high school class. The experience involves deadlines and a budget. The students get to work as colleagues with professionals. It’s unpredictable, like the real world. You don’t know the answer before you start.”

“We made a name for Los Alamos at the competition,” Tiffany said. “We made an amazing showing for a rookie team.”

“The competition was a blast,” Steve said. “The best part for us was that it was brand new for everyone else. Since this was our first year, we had a lot to learn. Everyone is already planning for next year.”

“I knew the competition would be big, but I didn’t know how big,” Steve said. “It was very high energy with lots of excitement. It’s so cool to start something like this and then see it happen.”

Even though the competition season is over, the team isn’t resting on their laurels.

“We’re planning to do a lot in the off season,” Tiffany said. “We’ve got several demonstrations planned, starting with one at the UNM-LA. The demonstration will take place in the Student Center (building 2) at 6:30 p.m. on Tuesday, April 24

“This is an open house for anyone who wants to see the robot up close and live,” Tiffany said.

It will also be an opportunity for the team to thank their sponsors. Los Alamos National Bank, the local chapter of the American Society of Mechanical Engineers, NASA, Mark the Electrician, Smiths of White Rock, Neptune, Best Western and JC Penney.

In the future, the robot will travel to JC Penney and Los Alamos National Bank for further demonstrations.

“We want to get as many students involved as we can for next year,” Tiffany said. “When school starts, we’ll be spreading the message. We’re also looking for more community mentors,” Tiffany said.

The team needs more than just geeks to be successful, Tiffany said. “We need people to do all kinds of things, like work on our website, handle finances, set up events and do publicity.”

Those wishing to join the team or serve as a mentor should email Tiffany at anton.tiffany@gmail.com

The Antons would like to see the FIRST robotics program spread to other age groups.

“We’d like to see a team at every school, not only here, but in other nearby communities,” Tiffany said.

Visit the FIRST website at http://www.usfirst.org/to learn more about the various programs.