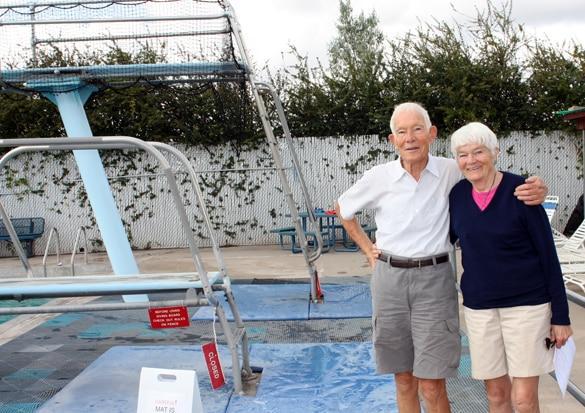 Jorg and Brigit Jensen at Barranca Mesa Pool, which celebrates its 50th anniversary this month. Photo by Kirsten Laskey/ladailypost.com 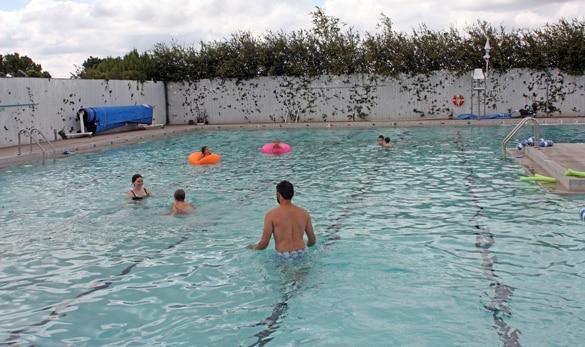 The Barranca Mesa Pool is so much more than a body of water for families can keep cool in during the summer months. It is a place for youngsters to learn job skills and earn money, a resource to be utilized for different fitness exercises, a refuge for parents to meet and socialize, but most of all it is an asset to help to build a community.

This year the pool celebrates its 50th anniversary. To mark the occasion, there will be a party thrown from 5-7 p.m. July 21 complete with a birthday cake.

Barranca Mesa Pool may have been around the community a long time but two people who help with the pool’s operation, Jorg and Brigit Jansen, have been involved with the neighborhood pool since the 1980s.

Brigit serves as vice president and Jorg is known as the “house” board member.

Being a member of a board for a community pool may seem like all fun in the sun but Jorg said it requires also a lot of work.

“You have to maintain it,” he said. “You can’t let it go. Anything dies on the vine … you have to replace it.”

It is also expensive; Jorg said not only is there a lease for the property, but the salaries, electricity, water, sewage, gas, chemicals, and other bills need to be paid. Plus, before the pool opens for the season, an inspector from the New Mexico Environment Department needs to check the pool out to make sure it meets the state’s requirements.

Still, the Jansens said the pool is worth the work and money.

“It’s not just work; it’s fun,” Jorg said. “It helps bring up a generation of kids.”

He pointed out that for many kids, the pool gives them their first job.

Jorg explained the kids start out as basket roomers. It used to be that when patrons came in, they were given a basket to put their belongings into. The baskets were stored in the guard room and the workers in charge of this room were called the basket roomers. Today people take their clothes with them in the lounge area, and baskets are no longer in use.

The basket roomers then graduate to become life guards.

“They grow up with this pool,” he said.

Eventually, some of those who use to work as lifeguards return to the pool with their children.

The pool not only provides employment but also a social space for parents. Brigit pointed out the pool is like a club for mothers.

The pool also offers morning and evening swim lessons every two weeks as well as water Zumba and aerobic classes.

Currently, Barranca Pool has 300 families who are members.

The pool has close ties to other neighborhood pools. Brigit said they have an agreement with East Park Pool that if one pool is experiencing problems, its members can use the other pool.

The pool wasn’t always a bustling place, the Jansens said. In fact, Brigit said in the 80s, the demographics on Barranca Mesa changed and there were a lot of less young families. As a result, it was proposed the pool be closed.

However, Jorg said, “then new families moved in and the whole world changed.”

In addition to young families supporting the pool, Brigit credited the board to keeping the pool opened all these years. “I think it’s also a dedicated board,” she said. “We spend so much time here you wouldn’t believe it.”

Both she and Jorg love it. Brigit describes herself as the “mother hen” and Jorg said, “When you retire it’s nice to have a new task.”

Water and swimming have big parts of the Jansens’ lives. They both grew up by rivers. Brigit said she grew up next to a river fed by glaciers, so it was icy cold, and Jorg said he grew up by a muddy river, which required some effort to wash all the muck away.

The pool officially opened in 1969. Jorg said there wasn’t much going on at the time so opening the pool was a big deal.

The pool is located next door to Barranca Elementary School. According to a summary of the pool’s history that Jorg wrote, the Barranca Pool Association arrived at a 50-year lease agreement with the school board for 0.6 acres of land.

The construction price, according to the document, was $150,000.

In the document, Jorg concluded, “For the last 50 years patrons enjoyed the pool every summer; and I have high hopes that the old lady will provide fun and relaxation for many more years to come with the proper tender loving care by its members and its board.”