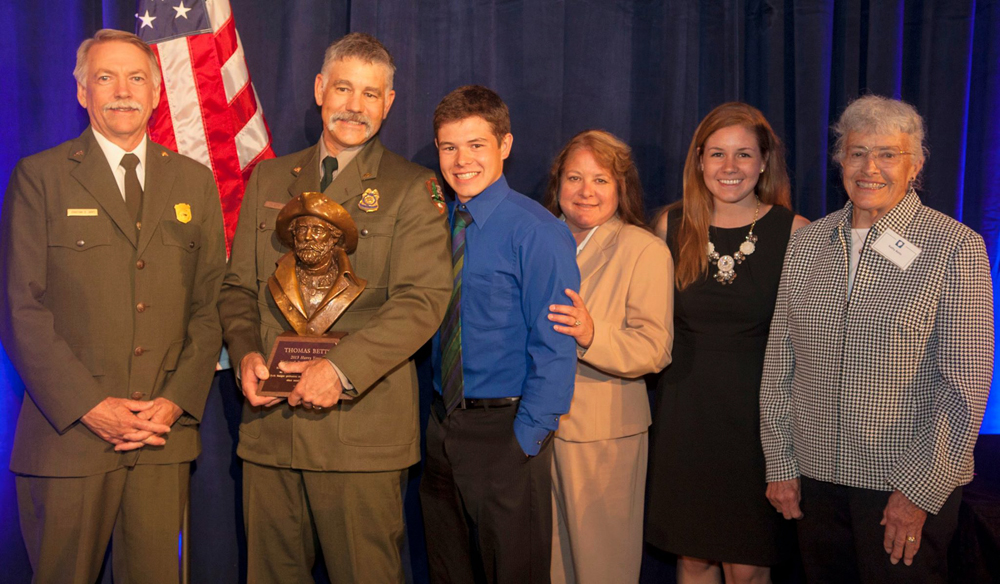 The honor, bestowed at a ceremony June 25 in Washington, D.C., is the NPS’s highest accolade for excellence in the art and science of rangering.

Betts, who grew up in national parks as a park ranger’s son, became chief ranger at Bandelier in 2009 after serving at some of the Park Service’s “crown jewel” parks from Alaska to Wyoming to Arizona.

“The Harry Yount Award recognizes the best of the best in the National Park Service,” said NPS Director Jon Jarvis, who was a colleague of Betts early in both their careers. “Having worked beside Tom in Crater Lake and Wrangell-St. Elias national parks, I know that he is a model park ranger – a true leader whose intelligence, situational awareness, physical strength, and skill set make the extraordinarily tough jobs look easy. He has truly made a difference in the parks, and for the visitors, through the years.”

Recalling an initial congratulatory telephone call from Director Jarvis, Betts said, “I started my career with Jon, and here was basically the pinnacle of my career, and he’s the one calling to tell me about it. It goes to show what a small family the Park Service really is.”

The award is named for the first U.S. park ranger. Harry Yount (1839-1924) was hired to protect Yellowstone National Park and its wildlife in 1880 as the first “gamekeeper” of America’s first national park. The award, a bronze bust of Yount, was presented by the NPS and the National Park Foundation, the official charity of America’s national parks and nonprofit partner to the Park Service.

Betts spent his boyhood in some of America’s most spectacular parks, from Rocky Mountain in Colorado to Yosemite in California to Grand Teton in Wyoming. He began his Park Service career in 1980 as a volunteer ski ranger at Crater Lake in Oregon. As a seasonal law enforcement ranger, he also saw service at Crater Lake, Lake Clark National Park & Preserve in Alaska, Hawaii Volcanoes National Park and Grand Teton. His postings as a permanent law enforcement ranger have included Grand Canyon National Park in Arizona, Rocky Mountain in Colorado and Yellowstone National Park in Wyoming.

Betts has protected park visitors during volcano eruptions, wild land fires, earthquakes, floods, snowstorms, wildlife encounters, and search-and-rescue missions. He has conducted park patrols via foot, truck, boat, helicopter, raft, ATV, skis, snowmobile, horseback and floatplane. Before coming to Bandelier, he was a district ranger and chief pilot at Wrangell-St. Elias National Park & Preserve in Alaska, where he logged more than 3,000 flight hours as a pilot in the “bush.”

“Early in my career I was told, ‘Remember who you are and what you stand for,’” Betts said. “I have always tried to emulate the high standards and uncompromised ethics exhibited by my father, my father-in-law, and many other fantastic park rangers I’ve had the privilege to work with and know. I have been very fortunate to have had a career doing the things I love in some of the most amazing places on Earth.”

Betts’s achievement is no surprise to Bandelier Superintendent Jason Lott.

“When I think about what it is to be a ranger in the National Park Service, I think of Tom Betts,” Lott said. “From rangering on horseback at Yellowstone to cross-country skis at Lake Clark, Tom’s done it all. He’s living the Park Service dream.”

Betts also is the fifth recipient of the national award in the past eight years to come from a park in the NPS Intermountain Region, the largest in the Park Service. The eight-state, 91-park region includes New Mexico, Arizona, Colorado, Utah, Wyoming, Montana, Texas and Oklahoma.