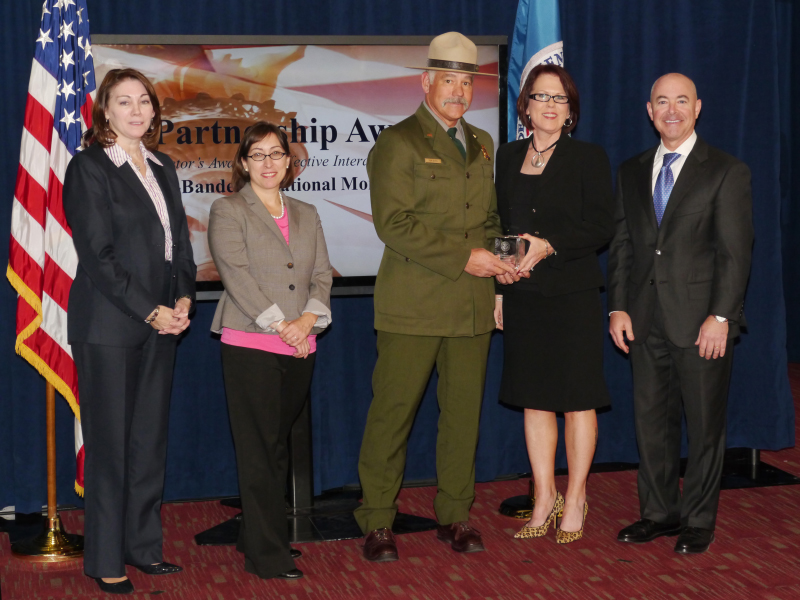 Under the soaring cliffs of Frijoles Canyon in Bandelier National Monument, 15 immigrants were sworn in as U.S. citizens during a naturalization ceremony on the 4th of July.

This past month, the U.S. Citizenship and Immigration Services (USCIS) awarded the Bandelier incident command team the USCIS Directors Award for Partnerships to recognize their work and collaboration with the USCIS in making this event a very special ceremony.

“It was an honor to represent not only Bandelier and the park team that facilitated the Citizenship Ceremony, but also to represent the National Park Service at the USCIS Director’s Award presentation” said Chief Ranger Tom Betts after receiving the award in Washington D.C. on behalf of the team.

More than 100 people attended the citizenship ceremony including a representative from Sen. Jeff Bingaman’s office. The National Park Service worked with the Boy Scouts, the local opera guild, the Los Alamos Rotary Club, County officials and U.S. Citizenship and Immigration Services to provide a once in a lifetime experience for the new U.S. citizens.

To make this event a reality, Betts contacted the Albuquerque USCIS to propose hosting the citizenship ceremony in the monument. Bandelier managed the event under the Incident Command System (ICS) to ensure a smooth planning and implementation process and to provide new incident management team members an opportunity to gain ICS experience.

Team members contacted the local Boy Scouts to participate, an opera singer to sing the National Anthem, and the Rotary Club to provide food and refreshments. Those attending the ceremony included the candidate’s friends and family and visitors to the monument.

This was the first citizenship ceremony held in a New Mexico National Park Service site. After hearing about the event, Superintendent Larry Turk of Aztec Ruins National Monument has expressed interest in hosting a similar event.

The efforts by Bandelier National Monument and USCIS Albuquerque have forged a new, positive, and continuing relationship between the two federal agencies. The relationship has truly enhanced the USCIS objective of promoting citizenship and immigrant civic integration and the National Park Service’s mission of encouraging enjoyment and education of public lands for this and future generations.