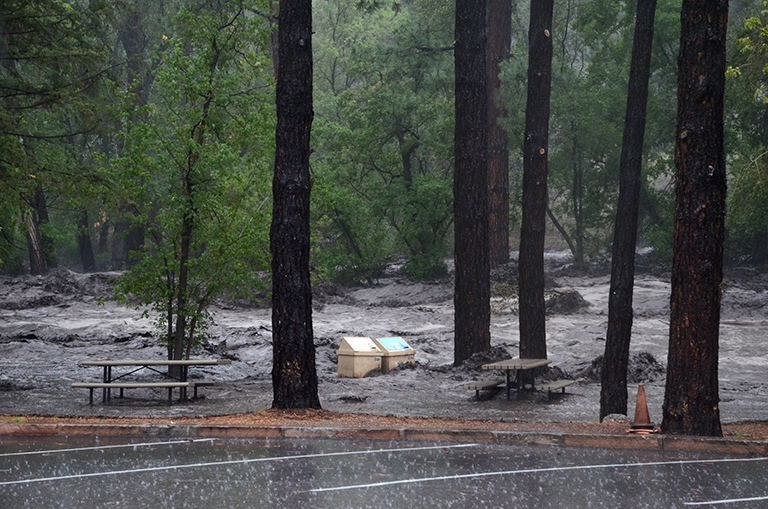 Flooding in Frijoles Canyon prompted Superintendent Jason Lott to close the monument for the safety of visitors due to debris on trails and the potential for flooding throughout the weekend.  Bandelier staff will begin clean-up efforts as soon as rains subside and hope to re-open the monument by Monday, Sept. 16.

This morning, heavy rains caused flash flooding more severe than any recent flooding the monument has received since 2011. Rain gauges in the upper part of Frijoles Canyon measured 11 feet at peak and water soon rushed into the visitor center parking lot, taking out signs and trash cans in its path. The historic district in Frijoles Canyon, including the Civilian Conservation Corps buildings and Visitor Center, were not damaged.

Although sandbags and jersey barriers protected the buildings, trails in Frijoles Canyon are covered in debris. Visitors should expect to see flood damage to trails when the canyon re-opens Monday (weather dependent.)

Thursday, Sept. 12, Bandelier staff received flood warnings that heavy rains in upper Frijoles Canyon would cause flash flooding. Around 4:45 p.m., the waters in Frijoles Creek slightly breached the bank causing water to touch the base of the sandbags across from the Visitor Center and spill into the parking lot.

A rain gauge at upper crossing, on the Frijoles Canyon Trail near Ponderosa Campground, initially recorded 3.5 feet, rose to 5.4 feet and then quickly receded. Three people were stranded on the other side of the creek on Thursday. They were advised by law enforcement rangers to remain where they were, given access to the closed Cottonwood restroom to stay warm and dry, and were able to cross the creek around 9:30 p.m., after waters went down.