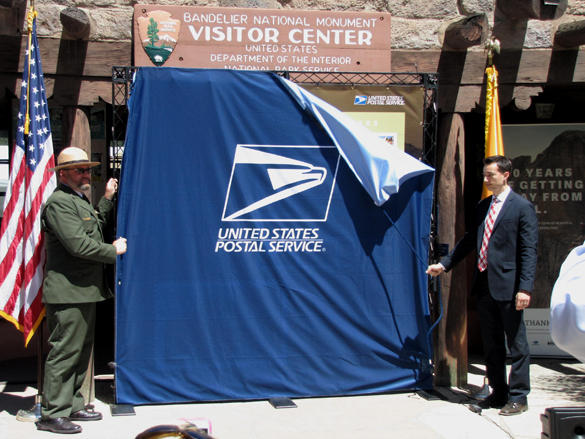 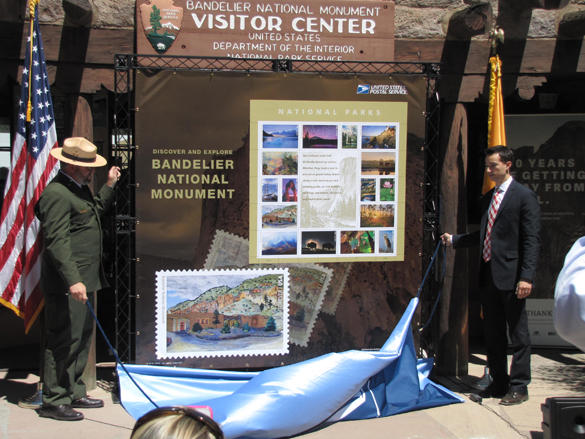 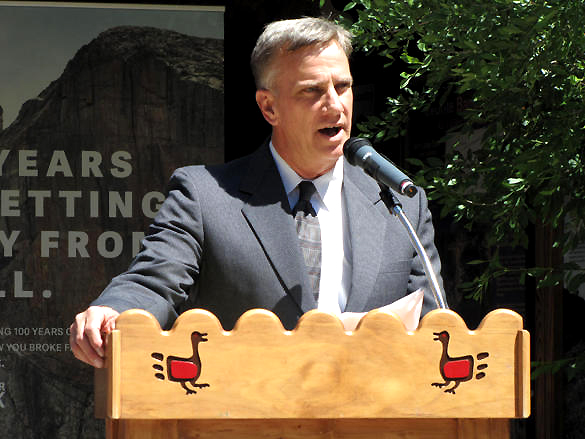 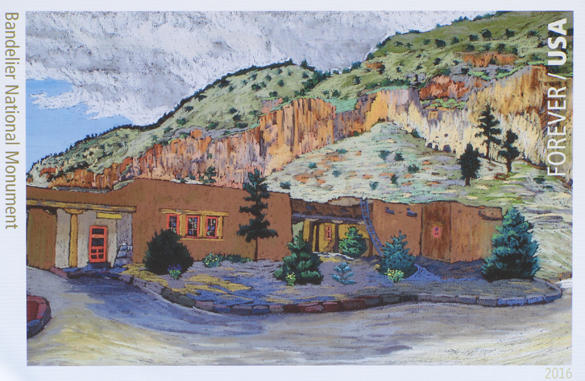 The new Bandelier National Monument stamp. Courtey image
The National Parks Stamp Pane
This sheet includes 16 different stamps, all of them showing views of national parks or plants, animals, artwork, objects, and structures found in or associated with a national park. Small type on the margin of each stamp indicates its location. 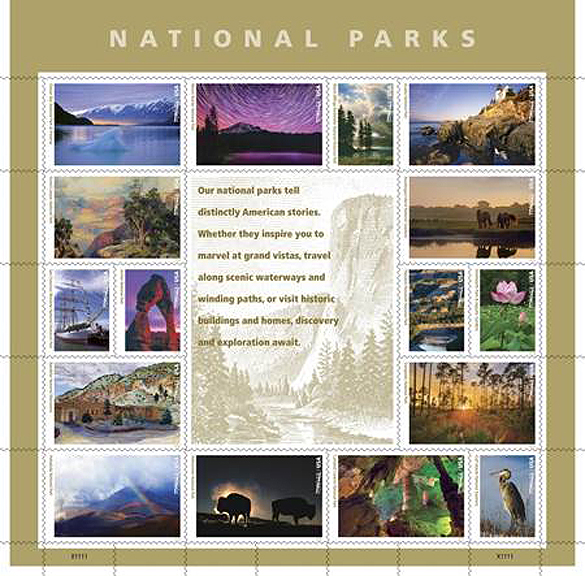 The image at the center of the sheet is a detail of the 1-cent Yosemite stamp issued in 1934, rendered here in light brown.

Bandelier National Monument
Marvel. Explore. Visit Bandelier and experience the wonders of this national monument. Discover the history that led to the conservation of our national treasures “for the benefit and enjoyment of the people.” Visit http://wp.me/p7xbUB-n for more information.
Creating the National Park System
The United States has more than 400 national parks — not only breathtaking vistas and landscapes of unparalleled beauty but also monuments, historic sites, memorials, battlefields and more.
The national park system is deeply rooted in American life and thought. By the first half of the 19th century various Americans, from politicians like Thomas Jefferson to artists like George Catlin, were beginning to envision ways to preserve special natural sites. By the 1860s, Americans were lobbying the government to protect beautiful and important places.

In 1864, during the Civil War, President Abraham Lincoln signed the Yosemite Act which granted the seven-mile Yosemite Valley and the nearby Mariposa Grove of giant sequoia trees to the state of California to manage “for public use, resort, and recreation…inalienable for all time.” After the war, Americans saw how the railroad was destined to reshape the American West, and the Northern Pacific Railroad became one of the strongest proponents of creating national parks. In 1872, President Ulysses S. Grant signed the bill that established more than two million acres as Yellowstone National Park — the world’s first national park.

By the early years of the 20th century, the West was dotted with new national parks, all of them formed, like Yellowstone, from large swaths of the public domain. In 1906, President Theodore Roosevelt signed the Antiquities Act, which was meant to protect archaeological sites, ancient artifacts, and objects of scientific interest. Roosevelt also used it to protect large areas from lease or development with an eye toward later converting them into parks. Roosevelt also named Devils Tower in Wyoming the first national monument and designated more than 800,000 acres of the Grand Canyon a national monument, a prelude to it becoming a national park. Presidents William Howard Taft and Woodrow Wilson would later follow his lead, creating monuments that later became national parks.

In 1916, President Woodrow Wilson signed the “Organic Act” that created the National Park Service. Its mandate was “to conserve the scenery and the natural and historic objects and the wild life therein and to provide for the enjoyment of the same in such manner and by such means as will leave them unimpaired for the enjoyment of future generations.” The act integrated all parks and monuments into a single federal system with its own administration, a common mission, and a director to serve as a permanent advocate in Washington, D.C.

Over the years, the National Park Service has grown with the times. The invention of the automobile inspired countless Americans to drive across the county to visit parks, and President Franklin D. Roosevelt brought the War Department’s historic battlefields, monuments and parks under National Park Service management in 1933, along with monuments in Washington, DC, and other monuments managed by the Department of Agriculture.

Today the grand and scenic parks of the American West remain iconic and important sites, but the definition of a park has expanded, with the National Park Service now overseeing historical parks and sites, national monuments, battlefields and military parks, recreation areas, seashores, parkways, lakeshores and more. Each year, more than 275 million people visit a national park, where they find that some parks tell human stories at a human scale, from the Civil War to the civil rights movement, while others protect and preserve beautiful places and irreplaceable natural wonders and provide opportunities for adventure, relaxation and fun.

Our national parks have been honored numerous times on U.S. postage. Ten stamps were issued in 1934 to promote “National Park Year,” one stamp was issued in 1966 to celebrate the 50th anniversary of the National Park Service, and eight colorful stamps were issued in 1972 to celebrate the centennial of Yellowstone, the world’s first national park. Various other stamps have featured individuals, organizations, and places associated with parks, and photographs of several parks appeared on recent Scenic American Landscapes stamps for use on international mail.

In 2009, the U.S. Postal Service worked closely with the National Park Service to publish The Grandest Things: Our National Parks in Words, Images, and Stamps, a richly illustrated 116-page hardcover book that explores how our national park system began, the changes it has endured, and the astounding array of sites it includes. Still available for sale by the U.S. Postal Service, The Grandest Things comes with eight Scenic American Landscapes stamps and the 8-cent National Park Centennial stamp from 1972 featuring Old Faithful at Yellowstone National Park. The back of the book features spaces to collect all parks-related stamps, as well as blank spaces for future issuances.

The stamps on this pane are Forever stamps. These Forever stamps will always be equal in value to the current First-Class Mail one-ounce price.
Ordering First-Day-of-Issue Postmarks
Customers have 60 days to obtain the first-day-of-issue postmark by mail. They may purchase new stamps at their local Post Office, at The Postal Store website, or by calling 800.782.6724. They should affix the stamps to envelopes of their choice, address the envelopes to themselves or others, and place them in a larger envelope addressed to:
National Parks Stamps
Special Events Coordinator
380 West 33rd Street
New York, NY 10199-9988
After applying the first-day-of-issue postmark, the Postal Service will return the envelopes through the mail. There is no charge for the postmark up to a quantity of 50. There is a 5-cent charge for each additional postmark over 50. All orders must be postmarked by Aug. 2, 2016.
Ordering First-Day Covers
The Postal Service also offers first-day covers for new stamp issues and Postal Service stationery items postmarked with the official first-day-of-issue cancellation. Each item has an individual catalog number and is offered in the quarterly USA Philatelic catalog, online at usps.com⁄shop, or by calling 800.782.6724. Customers may request a free catalog by calling 800.782.6724 or writing to:
U.S. Postal Service
Catalog Request
PO Box 219014
Kansas City, MO 61121-9014
Philatelic Products
There are eight philatelic products for this stamp issue:
560624, Framed Art, $39.95.
560606, Press Sheet with Die-cut, $67.68 (print quantity 3,000).
560610, Keepsake, $9.95
560616, First-Day Cover (set of 16), $14.56
560618, First-Day Cover, Full Pane, $10.02
560619, Cancelled Full Pane, $10.02
560621, Digital Color Postmark (set of 16), $25.92
560630, Ceremony Program (random single), $6.95
When reproducing the stamp images for media use only, please provide the copyright sign (the “c” inside the circle) and 2016 USPS. No notice required for photographs by individual photographers; the National Park Service images all require the following notices:
The Postal Service receives no tax dollars for operating expenses and relies on the sale of postage, products and services to fund its operations. 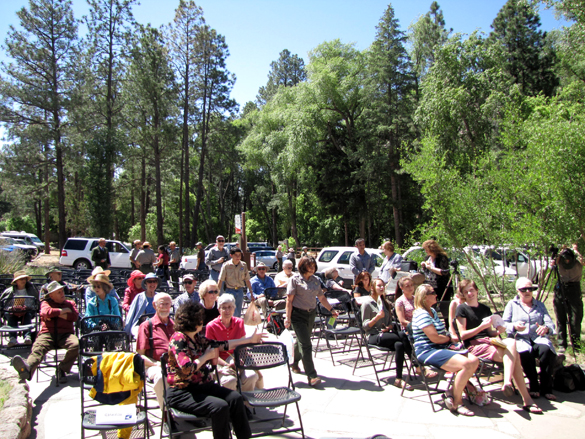 A crowd gathers for Thursday’s stamp unveiling at Bandelier. Photo by Chris Clark/ladailypost.com 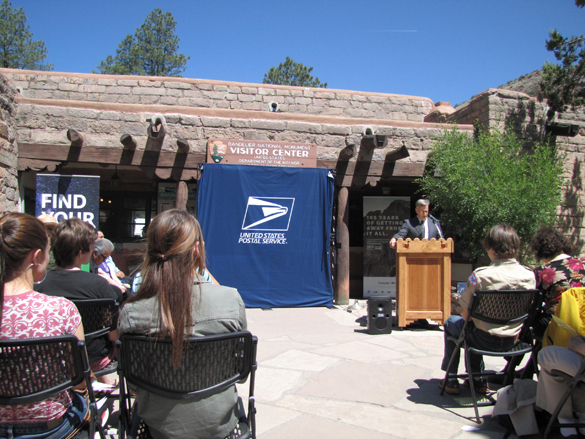 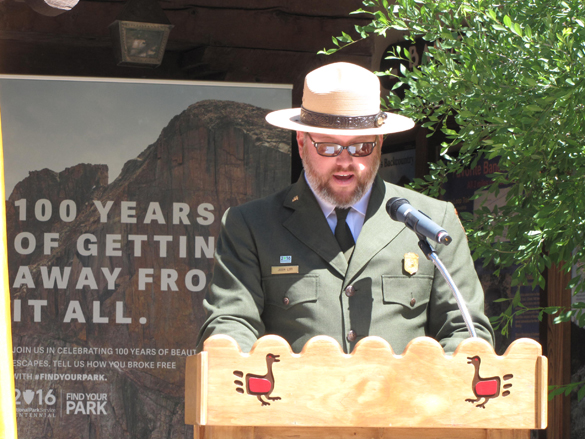 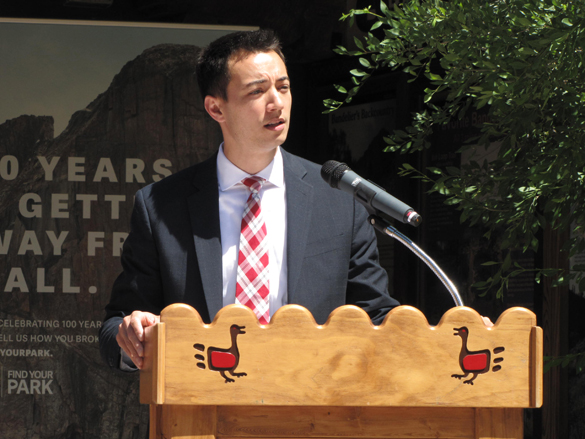 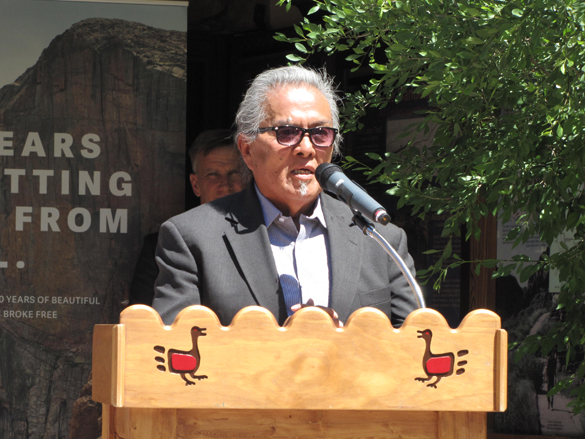