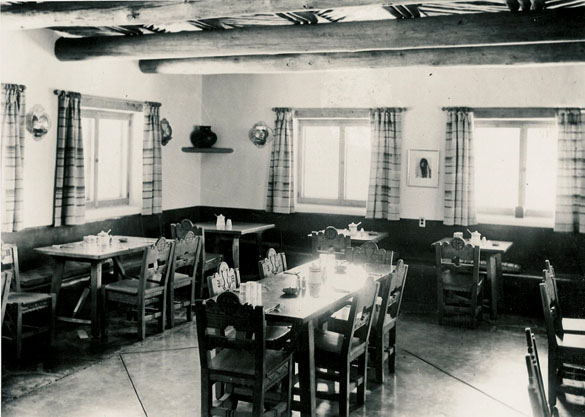 Lodge Dining: A part of Building 17 when it was used as a dining room in the 1940s. Courtesy/NPS 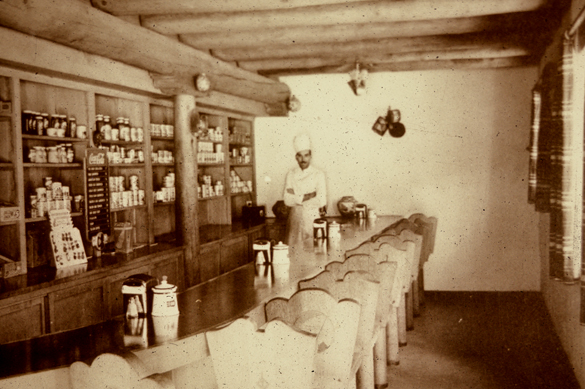 Lodge Lunch Bar: Another part of Building 17, when it was used as a lunch bar in the 1940s. Courtesy/NPS

The National Park Service (NPS) has issued a Request for Expressions of Interest (RFEI) concerning a concession business opportunity to provide food and beverage service within Bandelier National Monument.

This RFEI is issued solely for information and planning purposes and does not constitute a Request for Proposal (RFP) or a promise to issue a RFP in the future.

At a minimum, the NPS would like a person or entity operating under a concession contract (Concessioner) to provide seasonal food and beverage service in Building 17, a historic building in the Frijoles Canyon Historic District. The Concessioner would offer made-to-order breakfast and lunch items as well as pre-packaged, grab-and-go options for visitors who want to take food to go.

Rather than full service dining, the NPS envisions a fast casual restaurant, in which patrons select food and drink items, either in a cafeteria-type serving system or at a counter, and pay before seating themselves. In addition to the food and beverage service, the Concessioner may provide a limited array of retail merchandise in a small section of the assigned building and could choose to provide the following visitor services: beer and wine sales, bundled firewood sales (in the Monument’s campgrounds), or hosting special events (such as educational workshops or live performances, after regular hours and with NPS approval).

Historically and currently, concessioners have provided merchandise and souvenirs, including certified Native American handcrafts, made to order and prepackaged foods, non-alcoholic beverages, and bundled firewood. The existing concession contract will end Dec. 31, 2016. For details about the RFEI, visit: www.concessions.nps.gov/news.htm.

The National Park Service will provide a brief tour of Building 17 within Bandelier National Monument for parties interested in the concession business opportunity described in the RFEI. The tour is scheduled at 3:30 p.m., June 24, 2016. To attend the tour, register with Superintendent Jason Lott no later than 4  p.m. June 23 at Jason_Lott@nps.gov or 505.672.3861 x502. The Superintendent may be able to accommodate interested parties who cannot attend this scheduled tour.

The NPS asks interested parties to provide recommendations regarding and/or expressions of interest in operating this proposed business opportunity no later than July 8, 2016, via email to Jennifer Parker, Chief of Concessions, Intermountain Region, at jennifer_parker@nps.gov. To learn more about Bandelier National Monument, visit www.nps.gov/band.