Bandelier Bridge To Be Reinstalled Tuesday 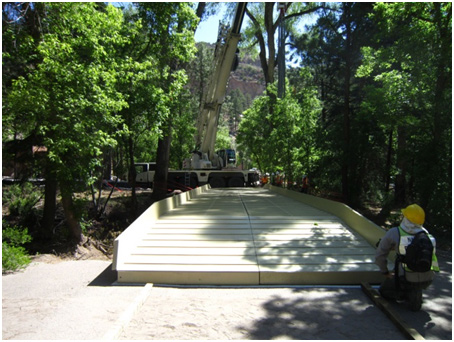 Installation of bridge created by Cadillac Fabrications in May 2012. Courtesy photo

A crane, accompanied by trucks carrying the two halves of the bridge and the crane’s counterweights, is scheduled to arrive in the Visitor Center area about 7 a.m. and by about 10:30 a.m. the procedure should be finished.

It will then take a couple of days for the park maintenance staff to prepare the bridge approaches and the areas across the creek for use.

For decades, there was a stone bridge at this crossing, providing vehicles with access to the picnic area and the backpacker and overflow parking areas. Then the Las Conchas Fire in 2011 burned more than ten miles of the upper part of Frijoles Canyon, making the canyon vulnerable to flooding whenever storms drop enough rainfall.

Because a similar situation had followed the La Mesa Fire in 1977, park staff knew that powerful flood waters would carry logs and other debris that could jam under the bridge. Water dammed behind the debris would then threaten the Visitor Center and other historic buildings.

It was a difficult but necessary decision to remove the bridge it as part of the work done to protect the buildings from potential flooding.

When the first big flood came in August of that year, the removal of the bridge, as well as the work it took to surround the Visitor Center with hundreds of concrete Jersey barriers and over 20,000 sandbags, proved to be right. The flood did carry huge logs and big rocks, but with the bridge gone, they went on by, and the sandbags and barriers successfully shielded the building from the water.

However, with no bridge, it would be years before visitor and work vehicles would be able to access the far side of the creek. So a company in Michigan was located that makes temporary bridges. They fabricated a steel bridge, 65 feet long and made in two lengthwise sections, which can be put in place for much of the year but removed during the summer rainy season when there is danger of flash flooding.

So now, in spring and fall, a huge crane comes into Frijoles Canyon to install or remove this bridge, and this Tuesday it will bring it back for the winter.

Most visitors to the park will continue to catch the shuttle buses from White Rock until Oct. 28, and can cross the bridge on foot to use the picnic area or access a number of trails. Those who arrive before 9 a.m. or after 3 p.m. can drive directly to the Visitor Center area; then if they choose, they can drive across the bridge to the picnic area. No fires or charcoal are permitted, but fuel stoves are welcome, and the canyon is open until dusk.

“This might be a fine opportunity for morning visitors to enjoy a late breakfast, or those who come after 3 p.m. might plan an early dinner under the trees,” Park Superintendent Jason Lott said.