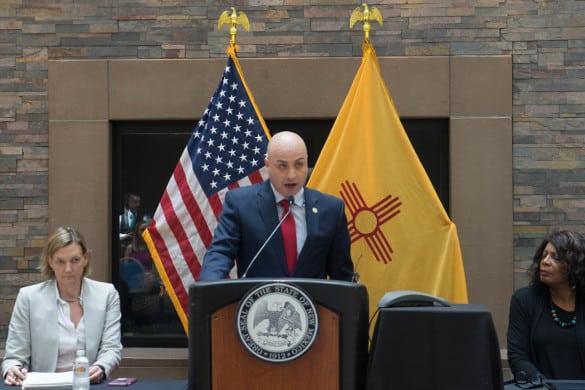 Attorney General Hector Balderas. Courtesy photo
AG News:
ALBUQUERQUE ― Tuesday, ahead of the Royalty Policy Committee meeting, New Mexico Attorney General Hector Balderas joined Albuquerque Mayor Tim Keller, and taxpayer and public lands advocates at the Albuquerque Convention Center to urge members of the committee to do their jobs and secure a fair monetary value and fair consideration of the public interest for the development of natural resources, including oil and gas on public lands.
Hector Balderas, Attorney General for the state of New Mexico said:
“The oil and gas industry has expanded substantially in New Mexico and we are supportive of that, however in recent years the use of public lands also comes with a commitment and a level of accountability owed to every family in New Mexico. Increasingly, there has been an epidemic of wasteful taxpayer energy going out the door and more importantly a pollution that needs to be held accountable.”
The Royalty Policy Committee is charged with making recommendations to the Secretary of the Interior to secure a fair value and return for the American taxpayer on the resources developed on public lands. Interior Secretary Ryan Zinke has stacked the committee with energy industry lobbyists, failing to include voices representing taxpayers and public lands.
Tim Keller, Mayor of Albuquerque said:
“Every other royalty in New Mexico, oil and gas, ranching, land and cattle, even renewable energy, are appropriately audited and accounted for as part of the State Audit Act and part of the role of the New Mexico state auditor. Unfortunately, that is not the case of course for methane because once again there has been a lack of support from the federal government to say that that should be included in all of our natural oil and gas resource rights.”
The Royalty Policy Committee meeting, which is set to take place this Wednesday, is one of only three announced in the country and could lead to major changes in federal policy and the amount of revenue ultimately collected by the state of New Mexico.
Ryan Alexander, President of Taxpayers of Common Sense said:
“As the resource owners, taxpayers have the right to fair market compensation for the assets extracted from our lands and water, as would any private land owner. However, over the last several decades taxpayers have lost billions of dollars in revenue to a complicated leasing and royalty collection system that frequently under values our natural resources and keeps decisions and information from public view.”
Donna House, Botanist and Consultant to Diné/Indigenous Peoples’ said:
“There is so much to talk about but most important piece is the royalty of 12.5% here in New Mexico is totally outrageous because it doesn’t at all consider or address the poverty that exists in these communities that are impacted by energy.”

A full video of today’s press conference can be viewed here.