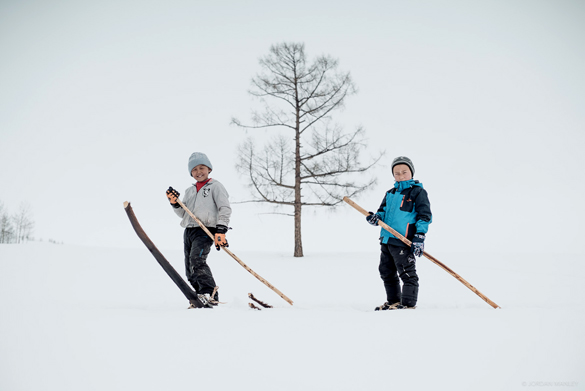 Stillshot from China, A Skier’s Journey, one of nine short films featured in this year’s Backcountry Film Festival. Courtesy/PEEC

Tickets go on sale today for the Backcountry Film Festival, made possible by the Pajarito Environmental Education Center (PEEC) and the Reel Deal Theater. Produced by the Boise-based nonprofit Winter Wildlands Alliance, the touring Backcountry Film Festival will make its way to more than 100 locations around the world. The screening at the Reel Deal at 7 p.m. Thursday, Jan. 26 will be the only one in New Mexico.

The Pajarito Brewpub will be selling beer and wine before the show and at intermission. Also at intermission PEEC will have a raffle for prizes donated by local businesses and national sponsors. Prizes include gift certificates from Sirphey and Pasta Paradiso, lift tickets from Pajarito Mountain, cool camping gear from CB Fox, Hydro Flask growlers from Fusion Multisport, gift card from Smith’s, skis from Pajarito Brewpub, daypacks from REI, and outdoor items from national sponsors. Raffle tickets will be sold before the show.

Tickets go on sale today and can be purchased in advance at the Reel Deal Theater for $12, or at the door on the day of the show for $15. As in years past, the film festival is expected to sell out, so it is recommended to purchase tickets in advance.

The Backcountry Film Festival is renowned for its mix of professional and grassroots films – from well-known filmmakers who search backcountry corners across the globe to submit their best work, to first-timers who take a video camera out on their weekend excursions. This year’s program features the following nine short films, aimed to inspire winter adventurers to seek the snow less traveled:

•    Filmmaker Ben Sturgulewski and DPS Cinematic present Reflections, the first of a three film series to be released this winter.

•    AK Girls Way features Liz Daley and Caroline Gleich. Liz is remembered as a consummate mountain guide with an infectious enthusiasm for life. The Live Like Liz Scholarship fund is awarded to women who want to enter the profession of alpine guiding.

•    Strap on a pair of snowshoes to transform your learning into our winter wildlands! Snowschool is the first-ever film to feature Winter Wildlands Alliance’s National SnowSchool program, which engages 32,000 youth across 60 sites. This story follows one of the sites located in Northern Idaho as the kids learn to develop relationships within themselves, with their peers, with their community, and with their natural world

•    There on the Periphery takes us on a midwinter dream with professional trail runner Ricky Gates.

•    Season on the Brink reveals the value and challenge in the indifference of mother nature. Come along for the ride with a group of close friends who set out to explore deeper into the northeastern backcountry, and along the way came face-to-face with the harsh realities of making sound decisions in the mountains.

•    The Lost Sierra gives us a snapshot of the history and of the current day culture of skiing in the Sierras.

•    China, A Skier’s Journey explores the rich past and dizzying future of skiing in Northern China. In some areas of China skiing is a means of survival. At the same time, it is exploding as a form of recreation for the Chinese middle class. What will the future hold?

•    Snowartist takes hiking in the mountains to a whole other level. Enjoy the process and product of creating mesmerizing designs in the snow using a pair of snowshoes and the simple act of walking.

•    Lifecycle of a Powderwhore follows Jonah Howell, who grew up in Salt Lake City, UT. He first tried skiing in high school. But it wasn’t until he borrowed his dad’s camcorder and started crafting ski videos with his brother Jonah that he realized he might be able to make a living from the ski bum way of life.

For more information about the Backcountry Film Festival and the tour, visit www.backcountryfilmfestival. org. To learn about the local screening, visit www.peecnature.org.

PEEC was founded in 2000 to serve the community of Los Alamos. It offers people of all ages a way to enrich their lives by strengthening their connections to our canyons, mesas, mountains, and skies. PEEC operates the Los Alamos Nature Center at 2600 Canyon Road, holds regular programs and events, and hosts a number of interest groups from birding to hiking to butterfly watching. PEEC activities are open to everyone; however, members receive exclusive benefits such as discounts on programs and merchandise. Annual memberships start at $35. To learn more, visit www.peecnature.org.