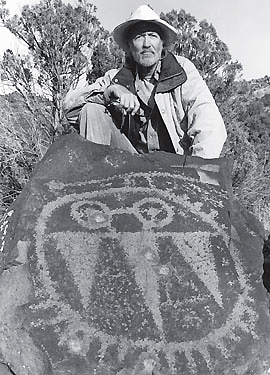 In Noble’s most recent book, In the Places of the Spirits, he combines eloquent text and equally eloquent images, photographs of the earth and humanity’s places on it, a moving record of the Southwest.

Rendered with grace and capturing the ineffable spirit of the landscape, petroglyphs and archaeological sites of New Mexico, Utah and Arizona, Noble brings together all of his gifts as a writer, editor and photographer: such a fitting author to celebrate Earth Day.

Noble will give a talk and slide show of images from his numerous books and collection of photographs as part of the Authors Speak Series with books available for sale courtesy of Collected Works Bookstore, Santa Fe.

N. Scott Momaday, in the introduction to In the Places of the Spirits, writes:

“It is clear that Noble has touched the earth of the Southwest, has breathed its purest air, has looked into the secret recesses of its mountains and valleys, has traversed its ancient trails, has observed the innumerable forms of life that give it motion and sound-and a diversity that is almost beyond imagining. And beyond these he has seen deeply into the presence of Man. It is this, above all, that so encriches the landscape and gives it such consequential meaning for us: the essence of the human being.”

Noble, who lives in Santa Fe, was on the staff of the School for Advanced Research for many years and is associated with the Archaeological Conservancy.

He has long studied the Southwest’s deep history and archaeology and  traveled widely to photograph ruins, rock art and landscape. His books bring fresh archaeological and historical  information to general readers.

The first, Ancient  Ruins of the Southwest: an  Archaeological Guide, has been in print for more than 30 years. Other titles  include In Search of Chaco: New Approaches to an Archaeological Enigma, and most recently, In the Places of the Spirits.

All his books and many photographs can be seen at www.davidgrantnoble.com. Noble’s photographs have been exhibited in galleries in New York, Santa Fe, San Francisco, and Dallas and collected by the Museum of New Mexico, Yale University’s Beinecke Library, and the New York Public Library.

In 2003, Noble received the Victor Stoner Award from the Arizona Archaeological and Historical Society in recognition of his “outstanding efforts to bring historical and archaeological awareness of the Southwest to the general public.”

In 2011, the Western National Parks Association  presented him with the Emil Haury Award for “outstanding contributions in scientific research or other activities that advance the understanding and interpretation of the  natural and cultural resources of western national parks.”

The Authors Speak Series is a monthly event featuring local and statewide authors speaking about their writing on a variety of subjects such as local and state history, travel, outdoor activities, New Mexico fiction, history and culture, poetry, and more.

The series is funded by the Friends of Los Alamos County Libraries. The talks are free and begin at 7 p.m.,  followed by the opportunity to meet the authors and enjoy refreshments. Some authors may participate with book sales and signings.