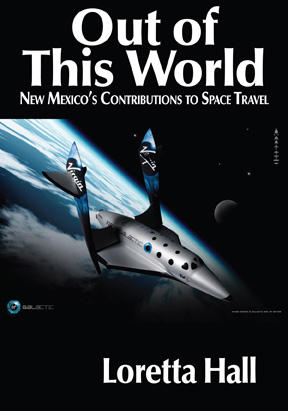 Cover of Loretta Hall’s ‘Out of This World: New Mexico’s Contributions to Space Travel.’ Courtesy photo

New Mexico and outer space have a long-standing relationship. Roswell of course, is famous for being a favorite destination for extraterrestrials. More seriously, the state has the longest continuous record in the nation for research to make space travel possible.

With Spaceport America, a commercial spaceport being built near White Sands Missile Range, the state is closer to reaching the goal of offering travel in space.

Loretta Hall will discuss New Mexico’s history and current involvement with space flight during her lecture at 7:30 p.m., Tuesday at Fuller Lodge. The talk is part of the Los Alamos Historical Society lecture series.

Hall is an Albuquerque-based freelance writer and author of five nonfiction books. Her most recent, Out of this World: New Mexico’s Contributions to Space Travel, is the only book to document the historic spaceflight-related research activities in the state and the personal stories of the people who undertook them.

New Mexico has several qualities that make it perfect for space travel and the first person who saw these qualities was Robert Goddard, the creator and builder of the first liquid fuel rocket, Hall said. Goddard came to Roswell in 1930 to conduct rocket tests. He choose the town for several reasons; it had a low population, which meant there would not be a lot of people who would be frightened by his rocket launches, and there was scarce vegetation so the possibility for fires was low. In addition, the town had good weather and higher evaluation so fuel could be saved.

New Mexico is one of a small group of states that is helping people experience outer space.

“New Mexico is one of eight currently licensed spaceports,” Hall said. One has already “dried up” from lack of activity, she said, but “People will come here to our spaceport.” She pointed out New Mexico’s spaceport has the capability to do both horizontal and vertical take offs and landings.

Los Alamos National Laboratory has also had a hand in New Mexico’s contributions to space exploration, Hall said. These contributions include involvement in developing a nuclear power rocket, which ceased due to lack of funding, a robotic telescope and most recently, the Mars Rover.

“I think it’s an innate desire of the human creature to extend any frontier we face,” Hall said. “Right now that frontier is space.”

Just as some people yearn to climb Mount Everest or take a submarine to the bottom of the ocean, others look to the skies.

“This is something we can do as an adventure,” Hall said. “It is also an opportunity to gaze at planet Earth and appreciate its preciousness.”

So what’s so fascinating about space? “I guess as you go out at night and look at the stars, it is such a beautiful thing to see,” Hall said.

There are a lot of unknowns in space and humans want to find out what exactly is out there, she said. For Hall, her fascination with outer space started when she was a teenager and the first astronauts were selected followed by man landing on the moon.