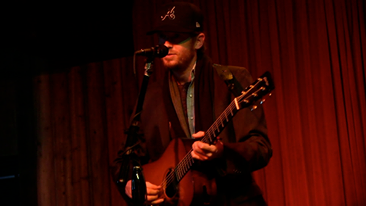 Last week I caught a part of an early 1940s movie with Tommy Dorsey playing a jive talking bandleader.

He was talking about “cool cats” and “daddy-os” and described some music as being “far out.” Whenever I say something is far out, I get looks like I’m John Denver’s unholy ghost. Have you seen the new stage area at Ashley Pond? It’s looking so cool! Far out! I love the Ashley Pond remodel. As my grandpa used to say, “yeah, it’s expensive but what the heck?” Granddaddio! I wonder what my grandkids are gonna say about me?

By the way, my daughter Annie Rose and her three kids will visit next week and catch two concerts before returning to Seattle. My wife, my son and I are as excited as if the Stones, the Beatles, Bob Marley and Beethoven were all playing a festival in Los Alamos next week.

The Los Alamos County Summer Concert Series is back at Ashley Pond this Friday night, Aug. 9 with the Austin, Texas country/country rock band, James Hyland and the Joint Chiefs. The show starts at 7 p.m. and is part of the weekend’s Los Alamos County Fair and Rodeo. The show is free and you should bring your lawn chairs.

The Austin Chronicle says, “If there’s a betting pool for the next big singer/songwriter in Austin, James Hyland floats to the top.” Hyland was a founding member and main singer of the South Austin Jug Band, a group that played here many times in the late ‘90s and ‘00s until they split up. They were great, playing an excellent mix of bluegrass, folk, country and rock. They had loads of energy and talent.

The first time they played here, they were on their way to the Telluride Bluegrass Festival where they won for “Best New Band.” It was a heady and super successful tour. They made a lot of friends here and have always looked at Los Alamos as one of their favorite towns. SAJB and James Hyland have both expressed their love for Los Alamos by dedicating CDs to the people and their fans of Los Alamos. C’mon out Friday for a real good time with James and his Texas mates.

James Hyland has mostly been an Americana or folk-rock singer. He has a hypnotic power and is a very captivating performer. He says his early musical influences were Willie Nelson, Toni Price, Otis Redding, Steve Earle, Robert Earle Keen, Bob Dylan, the late JJ Cale and Beck. He always had a great traditional country music voice. I told him to put out a country album 10 years ago. It looks like many others must have suggested the same, because his soon to be released album is Texas country.

He said the other day that he’s going to play some covers by such country icons as Willie (didn’t his daughter put on a great show at Smith’s a few weeks ago?) Nelson, Billy Joe Shaver, Don Williams, Bob Wills (The King of Texas swing), Merle Haggard, Hank Williams and at least one song off Bob Dylan’s classic country album, “Nashville Skyline.” He’ll also play some new country songs that he’s written in the last year.

Hyland’s biography says he could be the “love child of Beck and Alison Krauss at a Tom Waits party while Willie Nelson’s “Sad Songs & Waltzes” was playing on the jukebox. Hyland’s a real good man and I hope he becomes a huge country star! Bring your dancing boots.

While I was researching for this article, I found a Vice Admiral John Hyland who was Commander of the 7th Fleet and a member of the Joint Chiefs of Staff during the Viet Nam War years. I asked James if he was related to the commander and if that’s where he got his band’s name. James, who majored in creative writing and journalism at University of Texas said, “It makes for a good story.” He also told me to tell you to be ready for some “serious honkytonking” and bring your boots for two-steppin.’

At Saturday’s County Fair, beginning at 11 a.m., right after the parade, the County will present the soon to be very popular in New Mexico, country dance band, Renegade Mountain Band. They come from Los Alamos and are very good. They’re so good that the Summer Concert Series has them playing at Rover Park in White Rock Sept. 6 with the Los Alamos Big Band, for a very special dance concert. Catch them Saturday morning at the Pond while you check out the fair.

For Friday, Aug. 16, get ready for the Lisa Morales Band. Lisa and her sister Roberta have played here many times as the Sisters Morales but Roberta is taking a break from touring. Lisa and her fabulously tight band will play blues and rock and I’ve requested some of her Spanish classics. What a great voice!

I hope you can catch some of the shows.