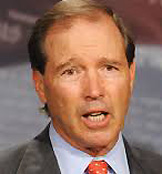 From the Office of U.S. Sen. Tom Udall

Udall’s proposal would allow the Federal Communications Commission (FCC) to expand its E-Rate program, which ensures schools across the country can provide broadband Internet in classrooms, to school buses so that students can access the internet to do their homework while on the bus ride home or to and from athletic events.

Across the country, teachers are increasingly assigning homework that requires internet access, but students in highly rural or low-income communities — including thousands of schoolchildren in New Mexico — are at a disadvantage because they don’t have internet access at home, either because they can’t afford it or because it isn’t available.

“That means they can’t access email, do research on the Internet, or apply online for jobs or college at home … this is deeply unfair,” said Udall, a longtime advocate for expanding broadband Internet in rural communities.

The idea for the proposal originated in May when Udall hosted FCC Commissioner Jessica Rosenworcel at a roundtable at Hatch Valley High School about how the issue is impacting rural New Mexico. Rosenworcel calls the inequality in access to the Internet, “the homework gap.” During the roundtable discussion, student athlete Jonah Madrid said that he travels over an hour each week to away games. And when he gets back, he has to do his homework in the parking lot so he can access the school’s Wi-Fi signal. He suggested making Wi-Fi available on school buses.

Udall first raised the idea during a Commerce Committee hearing last week, where Rosenworcel was a witness. And she agreed to work with him. Today, he announced that he will be pursuing the idea by calling on the FCC “to make this ‘Wi-Fi on wheels’ eligible for E-Rate support.”

Also on the call, Udall discussed his efforts to ensure the EpiPen Auto-Injector is accessible and affordable for families who need it. Mylan, the EpiPen manufacturer, has raised the price more than $600 for a package of two in just the last seven years, and Udall has heard from many New Mexicans who can not afford this life-saving medical device due to these unconscionable price increases. Udall plans to press the FDA to expedite alternative treatments at an Appropriations Subcommittee hearing tomorrow.

Finally, Udall noted that it is Prescription Opioid and Heroin Epidemic Awareness Week, and reiterated his support for President Obama’s proposal to spend over $1 billion to extend treatment and prevention services across the country. While Udall has supported grants to increase addiction services in New Mexico, he said much more help is needed, but so far, Republicans have blocked the additional emergency funding. He commended an Albuquerque mom who spoke during a White House roundtable discussion Monday about the desperate need for more resources. Louella Duran’s son died of a drug overdose, and Udall applauded her bravery for publicly shining a light on a difficult issue that faces countless New Mexico families.

Click here to listen to the full audio online.

Below are highlights from Udall’s remarks:

0:11 – “New Mexico has the second-highest rate of prescription drug overdose deaths in the nation. I have been pushing for comprehensive resources so everyone who wants treatment can get it. I support the president’s plan to dedicate over $1 billion to combat the epidemic, and I was extremely disappointed when Senate Republicans blocked that funding earlier this year.”

0:35 – “President Obama proclaimed this week Prescription Opioid and Heroin Epidemic Awareness Week, and yesterday, he invited families to Washington to share their stories. One of those guests was Louella Duran of Albuquerque, who lost her son after a two-and-a-half-year battle with addiction. I’m proud of Louella for coming here and shining a light on addiction, and I will keep fighting to pass comprehensive funding by the end of the year.”

1:09 – “Last May, I hosted FCC Commissioner Jessica Rosenworcel at Hatch Valley High School. I invited her so she could talk to students and teachers about how the lack of access to broadband internet affects them. The federal E-Rate initiative provides funding so that schools and students can access the internet. That has helped ensure students in urban and rural schools get the same access to lessons and information.”

1:39 – “But thousands of New Mexico students are still at a disadvantage at home because they don’t have access to the internet, either because it isn’t available or because they can’t afford it. That means they can’t access email, do research on the internet, or apply online for jobs or college at home. This is deeply unfair. Commissioner Rosenworcel calls this the ‘homework gap,’ and she and I are committed to finding a solution.”

2:09 – “During our discussion in Hatch, one student, Jonah Madrid, suggested an idea and this week, I am calling on the Chairman of the FCC to implement it.”

2:18 – Jonah is an athlete—he said he travels over 90 minutes on the school bus to away games, and when he’s back, he has to use the Wi-Fi signal outside the school at night just to get his homework done. He suggested installing Wi-Fi on school buses, and I think that’s a great idea.”

2:38 – “Last week, during a Commerce Committee hearing, I asked Commissioner Rosenworcel to work on it with me, and this week, I am urging the FCC to make this “Wi-Fi on wheels”eligible for E-Rate support.”

3:04 –  “Finally, I want to express my deep concern over the recent exorbitant price hikes for the EpiPen Auto-Injector. The EpiPen is literally a lifesaver for anyone with severe, life-threatening allergies. I’ve been inundated with letters and calls from parents whose children have to carry an EpiPen. They’re outraged, and they’re at wit’s end, because the manufacturer has raised the price to over $600 for a package of two—just in the last seven years.”

3:35 – “Many New Mexicans don’t have the money to afford huge cost increases. For example, Linda Thompson, from El Prado, wrote me that she has stopped buying and carrying an EpiPen because she can’t afford it against the advice of her doctor—even though a bee sting could put her in the hospital.”

3:55 – “I’ve written a letter asking Mylan’s CEO to answer questions about her company’s business practices. I also wrote the FDA on behalf of all of the New Mexicans who have contacted me. New Mexico families shouldn’t have to choose between buying their child’s EpiPen and other critical expenses.

4:16 – “On Wednesday, I’ll be questioning the FDA at an Appropriations Subcommittee hearing about this. I will highlight some of the stories New Mexico constituents have shared. The agency must do everything it can to help these families in need.”

4:37 – Udall answers questions on topics including school bus Wi-Fi, his legislation to change the broken judicial confirmation process, his efforts to move F-16 squadrons to Holloman Air Force Base and the upcoming Presidential debates.