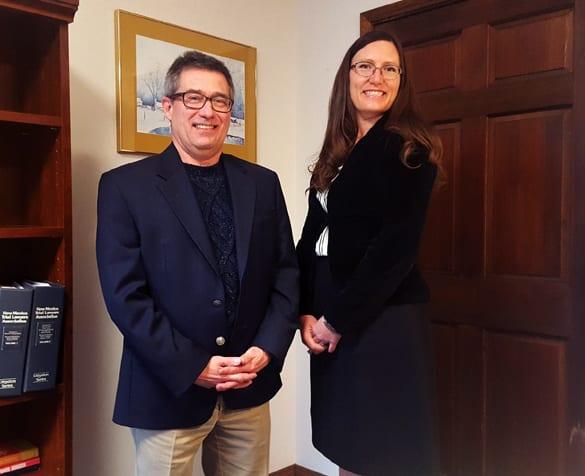 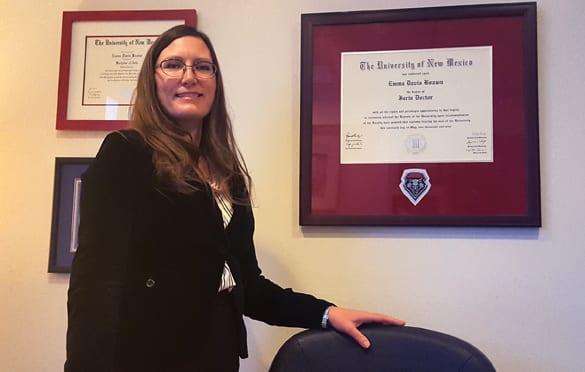 “I started working here March 13 so I’m in my third week and I just love,” Weber said during an interview Tuesday in her new office. “It’s different from anything I’ve done before … I’ve always worked in Insurance Defense and really enjoyed that but here I’m not only learning something new every day but I’m learning something new every day in so many areas and that’s really exciting.”

Phil Dabney describes Weber as a great addition to the firm.

“She’s already hit the ground running,” he said. “After commuting to Santa Fe for 5.5 years she has decided to live and work in our beautiful community and we are happy to have her here at our firm.”

Weber’s husband Paul Weber began interning at Los Alamos National Laboratory right of high school in 1998 and continued while attending college. The couple decided Los Alamos was where they wanted to live and raise their family.

“I graduated from UNM School of Law in 2009 and started practicing in Albuquerque,” Weber said. “After a year I moved to Santa Fe and commuted to my job in Albuquerque until 2012 when I got a job in Santa Fe. We were married, and I moved to my husband’s home in the Jemez and continued commuting … but it became exhausting with a small child and another on the way.”

The Webers moved to Los Alamos in March of 2017, just before the birth of their second son.

“I left that job in Santa Fe on a Monday and saw the listing for an attorney position with Phil Dabney that Thursday,” she said. “I couldn’t be happier, and my commute is now about 10 minutes.”

Dabney sat in on the first portion of Tuesday’s interview and talked about how the opening for a new attorney came about. He moved to Los Alamos from Nevada in 2016 and joined the law firm of P. Reid Griffith, PA. Intending to scale down his practice after 45 years, Griffith welcomed Dabney into the firm in March of 2016.

“Reid and I decided that he would begin working part time in January of 2017 and retire by the end of the year,” Dabney said.

Griffith is still practicing and finishing up his pending cases but is not taking on any new clients, Dabney said, adding that having practiced in Los Alamos for 45 years, Griffith is an incredible resource for his firm.

Philip J. Dabney P.C. practices law in the areas of:

Dabney spoke about the process involved when an employee loses their security clearance and added that his firm has a 100 percent success rate in getting those clearances reinstated for his clients.

Dabney practiced law for a large law firm for about 10 years before leaving to focus more on Alternative Dispute Resolution (ADR). He also does pro bono work representing children. He is a member of the New Mexico Alternative Dispute Resolution Commission and explained that the Supreme Court seeks to get smaller cases resolved in arbitration because they often take as much time at trial as larger cases. He has handled about 1,000 cases over his career.