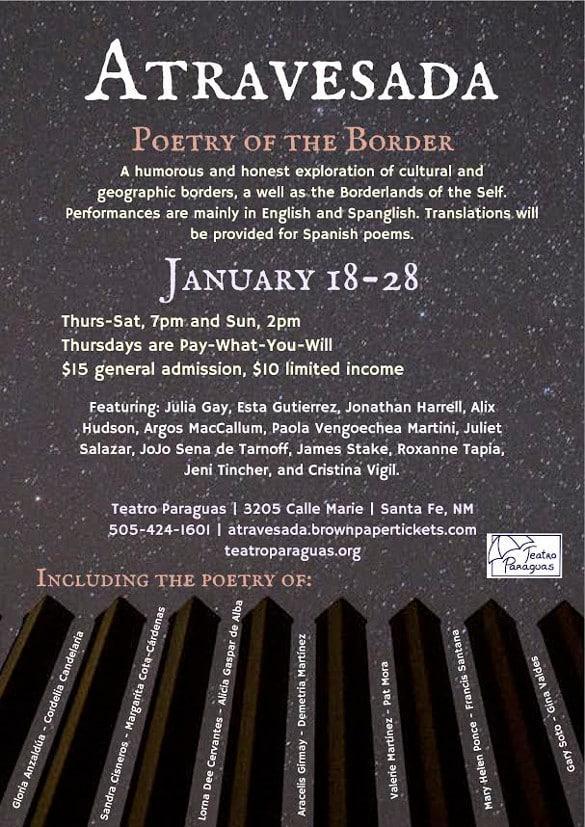 TP News:
Atravesada: Poetry of the Border performance is 7 p.m. Thursday-Saturday, Jan. 18-28, and 2 p.m. Sunday, at Teatro Paraguas, 3205 Calle Marie in Santa Fe.
Atravesada is part of Teatro Paraguas’ annual Poesía Viva – living poetry – series. It explores the physical and political U.S.-Mexico border and also the Borderlands of the Self. Woven with corridos and other music of the frontera (the borderlands), Atravesada has plenty of humor – but also offers an unflinching portrait of the border as “una herida abierta.”
Atravesada is enacted poetry performed as a mix of solo and ensemble pieces, and features the performances of Julia Gay, Esta Gutierrez, Jonathan Harrell, Alix Hudson, Argos MacCallum, Juliet Salazar, Jojo Sena de Tarnoff, James Stake, Roxanne Tapia, Jeni Tincher, Paola Vengoechea Martini, and Cristina Vigil.
Atravesada: to have been crossed, to have gone through, to have been pierced, to have been meddled with. “A borderland… is in a constant state of transition… Los atravesados live here: those who cross over, pass over, or go through the confines of the ‘normal.’” (Gloria Anzaldúa,Borderlands)
In addition to music, the one act performance weaves together the poetry and prose of more than a dozen poets, including the most famous of the genre: Gloria Anzaldúa, Cordelia Candelaria, Lorna Dee Cervantes, Sandra Cisneros, Margarita Cota-Cárdenas, Alicia Gaspar de Alba, Aracelis Girmay, Demetria Martínez, Valerie Martínez, Pat Mora, Mary Helen Ponce, Francis Santana, Gary Soto, and Gina Valdés.
Atravesada first explores la frontera as a literal place: from voice to voice, it ranges from a “powerful mother,” “a wall of barbed lies,” a “sleeping beauty.” The geographic traversing soon turns inward, and explores the varied linguistic experiences of those who have crossed the border. In “Learning English,” a coffee klatch of women struggle to express themselves in a foreign tongue; “Refugee Ship” speaks of a woman “orphaned from [her] Spanish name.” Soto’s “Spanish” and Mora’s “Legal Alien” are clever portraits of growing up bilingual and bicultural.
Next is the physical, U.S.-Mexico border. Here are the stories of the maqui girls who work in the dangerous borderland factories, la migra’s raids on fields and cars, a woman demanding justice for those without papers.
Atravesada continues with the powerful and uplifting theme of Love in the Borderlands – and Love as a Borderland. This border can connect two people, as in Gaspar de Alba’s tongue-in-cheek “Making Tortillas,” or can fail to span the void in Cervantes’ “Para un Revolucionario.” Cisneros’ “You Bring Out the Mexican in Me” is an irreverent, delightful tour-de-force.
Paired with romantic love is familial love, and the show ends with these voices. “Don’t Give In, Chicanita,” Anzaldúa begs; and after stories of scrubbing dishes and dancing folklórico and playing baseball, we know she won’t.
Cost: Thursday: Pay-What-You-Will, $15 general admission, $10 limited income. For tickets call or visit 505.424.1601, atravesada.brownpapertickets.com.
For more information, visit teatroparaguas.org, or email argos@teatroparaguas.org
Menu
Los Alamos
25°
Fair
7:11am5:22pm MST
Feels like: 18°F
Wind: 7mph N
Humidity: 65%
Pressure: 30.26"Hg
UV index: 0
SunMonTue
45/27°F
46/25°F
43/21°F
Weather forecast Los Alamos, New Mexico ▸