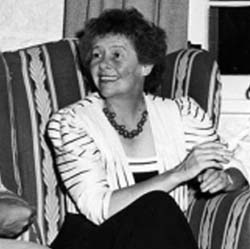 Dorothy Scarritt McKibbin. Courtesy/AHF
AHF News:
Washington, D.C. – The Atomic Heritage Foundation (AHF) is pleased to announce the release of a never-before-heard audio interview with Dorothy Scarritt McKibbin taken in 1965 on the “Voices of the Manhattan Project” website.
Known as the “Gatekeeper to Los Alamos,” McKibbin was the first reassuring face that fatigued Manhattan Project recruits saw upon arriving in Santa Fe, New Mexico. The rare, hour-long interview provides novel insight into the mind of the woman who became one of the most beloved figures on “The Hill.”
McKibbin, a single mother who moved to Santa Fe with her son in 1931, recalled her first encounter with the director of the Los Alamos laboratory, J. Robert Oppenheimer, in the lobby of the La Fonda: “He had on a trench coat and a pork-pie hat,” she remembers. “He walked sort of on the balls of his feet. I think that he had a pipe in his mouth.” When he introduced himself, McKibbin was mesmerized. “I did not get the name; I wouldn’t have known anything about it if I had,” she admits. “He said about five words and then he turned and went on. I turned to Joe Stevenson [Oppenheimer’s aide] and said, ‘I’ll take the job.’”
On March 27, 1943 McKibbin moved into her new office at 109 East Palace Avenue in Santa Fe. The building, constructed as a Spanish hacienda in the 1600s, became the administrative hub of the Manhattan Project. As the Project continued to grow in the final months of 1943, 109 East Palace was flooded with new recruits from across the country.
“We averaged about 67 people in there per day and 110 telephone calls per day,” explains McKibbin. “We were really very busy.” Her warm smile and engaging personality reassured new recruits that they would be taken care of. She also gained the confidence and respect of Oppenheimer, who invited her to attend private parties at his house on Bathtub Row.
McKibbin could not help but notice Oppenheimer’s special relationship with Los Alamos. “He was much more at home out there in those deserts spots than any of the other men who were with him,” she recalls. “He loved this country. He’s a part of it. Everybody here loves him. The Indians love him! The natives love him! They feel that they can have access to him. They can talk to him.”
For many Manhattan Project veterans, it was McKibbin’s friendliness and reassurance that made her one of the most beloved people on the Hill. “She was a very warm, generous, smiling woman who immediately put you at ease,” recalls Rebecca Bradford Diven, a chemist who worked on the Project. “She became a lifelong friend of everybody who ever went through her office.”
In 1965, Stephane Groueff interviewed dozens of Manhattan Project principals for his book, “The Manhattan Project,” the first comprehensive history of the project written for the general public. AHF is grateful to the Boston University Howard Gotlieb Archival Research Center, which houses the Groueff Collection. These oral histories should be a terrific resource for scholars, students, and members of the public interested in the history of the Manhattan Project and its legacy for today.
AHF is deeply grateful to the Crystal Trust, the Institute for Museum and Library Services, the City of Richland and other donors who have generously supported our project to make oral histories of the Manhattan Project available online. Stay tuned for many more to come.

To learn more about the Atomic Heritage Foundation and its projects, call 202.293.0045 or visit www.atomicheritage.org.