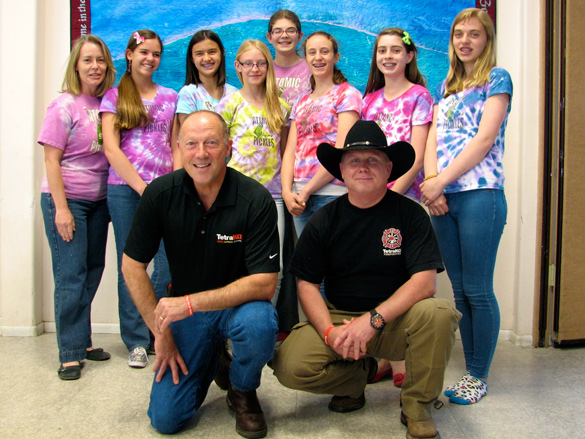 An up close look at fire retardant gel. Photo by Sherry Hardage

The following activities resembled a scene right out of Ghost Busters. Bright florescent gel spewed from a high-pressure hose, splattering pine trees and bushes. Flying globs of it landed on the Scouts who took turns practicing with the hose.

The gel is a product of TetraKO, a Minnesota company that manufactures an additive for water. The powder-water mixture creates a biodegradable (and edible!) fire retardant. Bright food-grade colors are added so the gel can be seen wherever it has been sprayed.

Well, the Atomic Flying Pickles are an impressive team made up of curious and intelligent girls. They have participated in the New Mexico FLL challenge for the last four years. Last year they won the state competition and went on to the national competition, the FIRST World Festival, in St. Louis.

Two of the girls, Summer Bronson and Catherine Rousculp, also went to Washington, D.C. as representatives of the team to meet the President. They discussed their award-winning Lego robot and their project, a cooling headband to help with insomnia. This year their team placed second in New Mexico’s FLL state competition. This weekend, the girls are at Lego Land, near San Diego, for the North American Tournament of Champions.

Having grown up with major forest fires threatening their town every few years, the Atomic Flying Pickles decided to use fire as their disaster-of-choice. Since improperly contained campfires cause 15 percent of forest fires, the Pickles came up with an idea for campers to use a fire retardant that would assure their campfires are out cold. They looked at a number of products on the market, and decided the TetraKO gel was the best solution.

The gel is made from water, cornstarch, and a small amount of binder so the cornstarch particles remain suspended for a long time. Cornstarch is inexpensive, a good heat absorber, and creates “sticky” water that will remain in place wherever it is sprayed.  It also slows the rate of evaporation. Exposed to fire, the cornstarch absorbs heat and causes the water to turn slowly into steam, helping to suppress the fire.

The girls decided to create an inexpensive package that could be sold to campers. It would contain gel powder and a way to mix the powders with water. The result could then be sprayed on or poured over a fire-pit to ensure that the embers won’t be pulled up in a strong wind and scattered into nearby woods.

Two representatives from TetraKO were on a cross-country trip visiting fire departments in the west. Valdo Calvert and Randy Wahl decided to make a little detour to Los Alamos. Their demonstration showed the girls how the gel is used during forest fires. They gave them excellent advice about manufacturing, pricing, and marketing their new product.