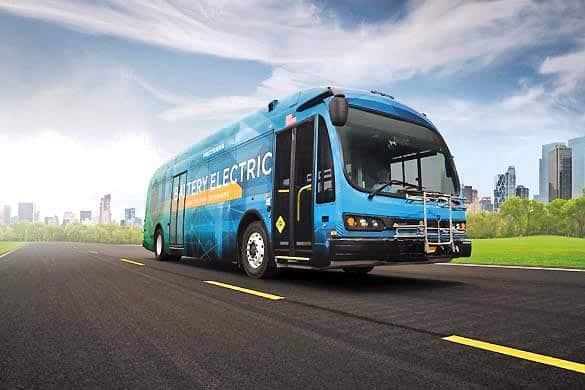 The smell of black exhaust smoke pouring from the tailpipes of Atomic City Transit buses or the sight of transit drivers filling up bus gas tanks will one day be a thing of the past.

The grant selection was announced in August and Los Alamos County is among 14 states awarded grant money.

Public Works Deputy Director Jon Bulthuis said it was a surprise to hear the County has been awarded the grant money.

“We had high hopes,” he said, adding that although applications for grants are often completed and submitted, they are not always approved. Therefore, “we were quite excited,” to receive the FTA grant, Bulthuis said.

Transit Manager Annette Granillo explained that Los Alamos County is actually a sub-recipient for the grant money. Several municipalities or entities in the state, including the County, submitted applications for the grant through the New Mexico Department of Transportation’s (NMDOT) Transit and Rails Division and NMDOT then submitted one big application to the FTA, Granillo said.

The next step, Granillo, said, is for NMDOT to accept the grant award and allocate the funds to the County through a memorandum of agreement. Granillo said that they asked to procure one electric bus in fiscal year 2019 and a second bus in fiscal year 2020. One electric bus will replace a gas-powered one and the other will be an additional vehicle to the fleet. Atomic City Transit has 31 fixed rate buses.

The buses will be purchased from Proterra, a company that has supplied 574 electric buses to 67 entities in 30 states. This is not like purchasing a car off a showroom floor at dealership; Granillo said it takes about 12-18 months to construct a bus.

Bulthuis said the two buses will used in the downtown route. He explained that the route requires less energy than going up and down the Main Hill and it also will be an opportunity to promote the buses to the public.

“From a visibility perspective it makes a lot of sense,” he said.

The buses will look like any other public bus but Granillo said there will be some sort of message displayed on them to inform the community about what makes these buses unique.

There are several advantages to having electric buses included in the fleet, Granillo said.

“To begin with, we are the County where discoveries are made,” she said, adding that having electric buses continues that tradition.

Additionally, it is one of the County Council’s goals “to seek out efficient alternative fuels,” she said. “The main goal is to keep our beautiful skies blue.”

Electric buses can achieve these objectives because the most effective way to lower emissions is to use electricity, which has zero tailpipe emissions, Granillo said.

“You can’t get much better than that,” Bulthuis said.

The buses not only offer environmental advantages, but also benefits to maintenance and cost. Not only will fuel no longer need to be purchased but maintaining things such as the transmission will not be required.
Granillo said the buses can travel approximately 167 miles before they will need to be charged.

“We will see a cost benefit above the environment benefit,” Granillo said.

Los Alamos is not the first municipality in New Mexico to pursue electric modes of  transportation. For instance, Albuquerque has electric buses and the Road Runner Transit in Las Cruces submitted a request for proposal for five electric buses.

Granillo and Bulthuis recognized several entities and individuals for helping to secure a successful grant application. These entities include the Los Alamos County Council, which Granillo said offered support for pursuing the grant and as well as made energy efficiency a goal. They also recognized Public Works Director Philo Shelton.

“Shelton is a champion in alternative fuels and very supportive of us spending our time moving forward on this,” Bulthuis said.

Atomic City Transit is a popular service in Los Alamos. Granillo said there were 19 sub-recipients in the grant NMDOT submitted to FTA. Of those 19, Atomic City Transit was the leader in ridership numbers. It provides 500,000 rides a year.

Granillo said it is a popular mode of transportation for young people and for those who want to cut down on their own personal fuel emissions.