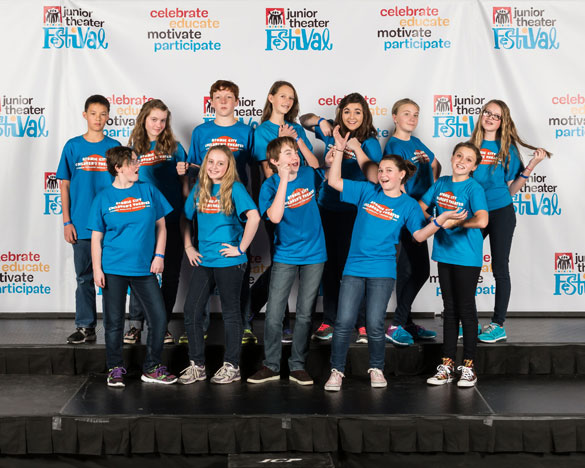 “This was a great group of performers,” McAdoo said. “They gave a fun and fantastic performance.”

“The Atomic City Children’s Theater ensemble showed great teamwork and energy,” Cerniglia added. “They did a wonderful job sharing notes and supporting one another to create theater magic!”

Joseph Sarrao and Evelyn Wohlbier were named to the Junior Theater Festival All-Stars, made up of two outstanding performers from each group attending the festival. The All-Stars performed a song during the closing ceremony for all 4,500 festival attendees.

The Junior Theater Festival offered an enthusiastic environment for students and teachers to interact with thousands of others who share their passion for musical theater. In addition to presenting a 15-minute selection from a musical, both students and teachers participated in interactive workshops led by Broadway and West End professionals, gained from professional development and enjoyed theatrical fellowship.

Atomic City Children’s Theater is an after-school theater program offered by the Los Alamos Public School system to encourage academic excellence in students through direct involvement in live theater. The directing staff is made up primarily of district faculty.

For the group’s Junior Theater Festival trip, Atomic City Children’s Theater employed a “multiple casting” strategy to allow students to maximize their growth and experience—performers switch parts for each scene.